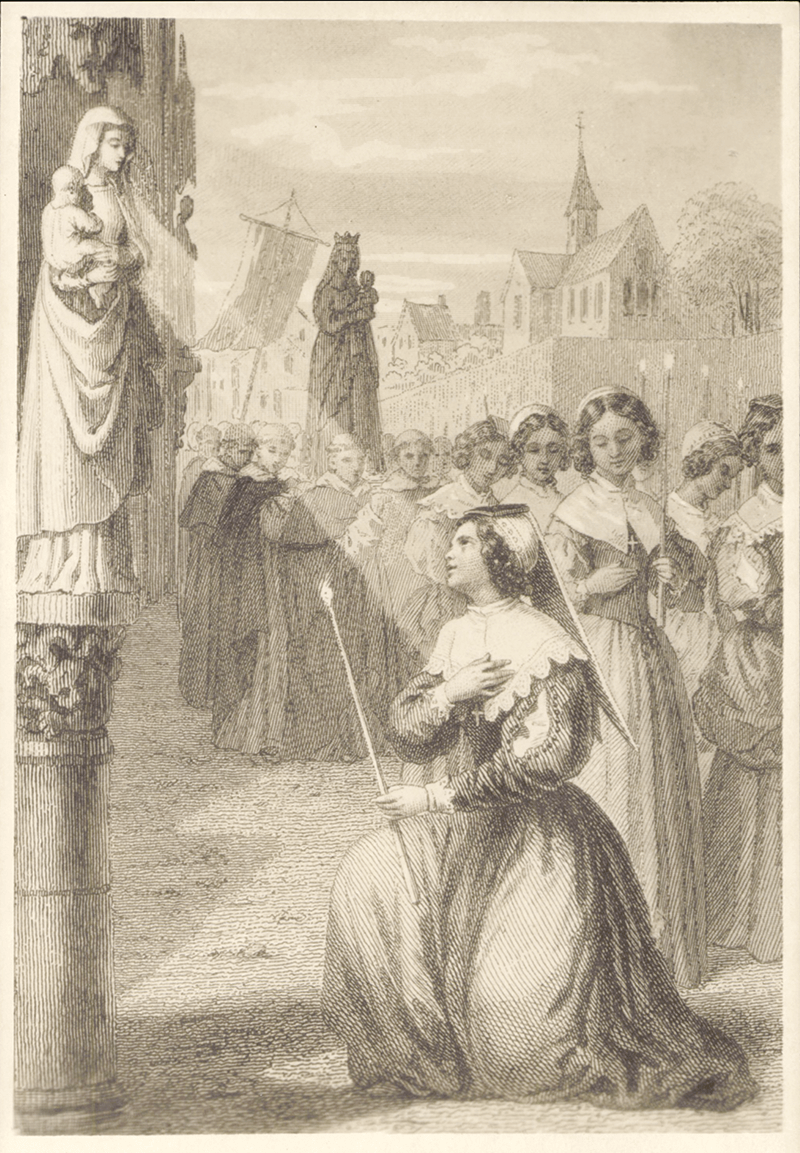 There have been many saints through the years who set off in one life direction only to find that God had plans for them in another.

Such was the case for St. Marguerite Bourgeoys; at the age of 20 she was convinced that she had a vocation as a cloistered nun, but when she was turned down by both the Carmelites and the Poor Clares, a wise priest told her that God apparently had something else in mind for her.

Marguerite Bourgeoys was born on Good Friday, 1620, in Troyes, France.  The sixth of 12 children, Marguerite assumed the care of her younger brothers and sisters at age 19 following the death of her mother.  Not long after, in 1640, she had a profound mystical experience involving a statue of the Virgin Mary at Notre-Dame Abbey in Troyes which transformed her life.  “I found myself so touched and so changed that I no longer knew myself,” she said.  “On my return to the house, everybody noticed the change.”

Although she could not gain admittance to a cloistered order, Marguerite nonetheless belonged to a non-cloistered branch of the Congregation of Notre-Dame at Troyes. These women trained as teachers, so when the governor of the French settlement in Canada came to visit his sister in the convent there, he asked Marguerite if she would be interested in coming to the New World to start a school.

She agreed, and in 1653, Marguerite found herself at Ville-Marie – present-day Montreal — a colony of some two hundred souls.  As it turned out, Marguerite would spend the rest of her life in Canada.

Marguerite’s initial work in the colony was not in a school but in the hospital that had been established there. In reality, many children did not survive to reach school age, so it wasn’t until 1658 that she was able to fulfill the mission for which she had been recruited. Her first school was begun in the only building available – an abandoned stone stable.

Marguerite would return to France three more times to both recruit new teachers and to work to found a new religious order dedicated to teaching and charity.  Although she received approval under civil law from King Louis XIV, the Church was reluctant to grant permission.  Until that time, women religious were only allowed to live in cloisters and were prohibited from leaving their convents; Marguerite, however, founded one of the first non-cloistered communities in the Catholic Church and the very first one in North America.  She took her inspiration from her early experience of the Blessed Virgin who, she often said, was “not cloistered” and “never refused to be where charity or necessity required help.”

In 1698, the Congregation of Notre Dame was officially recognized by the Catholic Church and Marguerite herself became known as the “Mother of the Colony.”

St. Marguerite Bourgeoys died in 1700 in Montreal and was canonized in 1982. She is the first female saint of Canada, and her feast is Jan. 12.