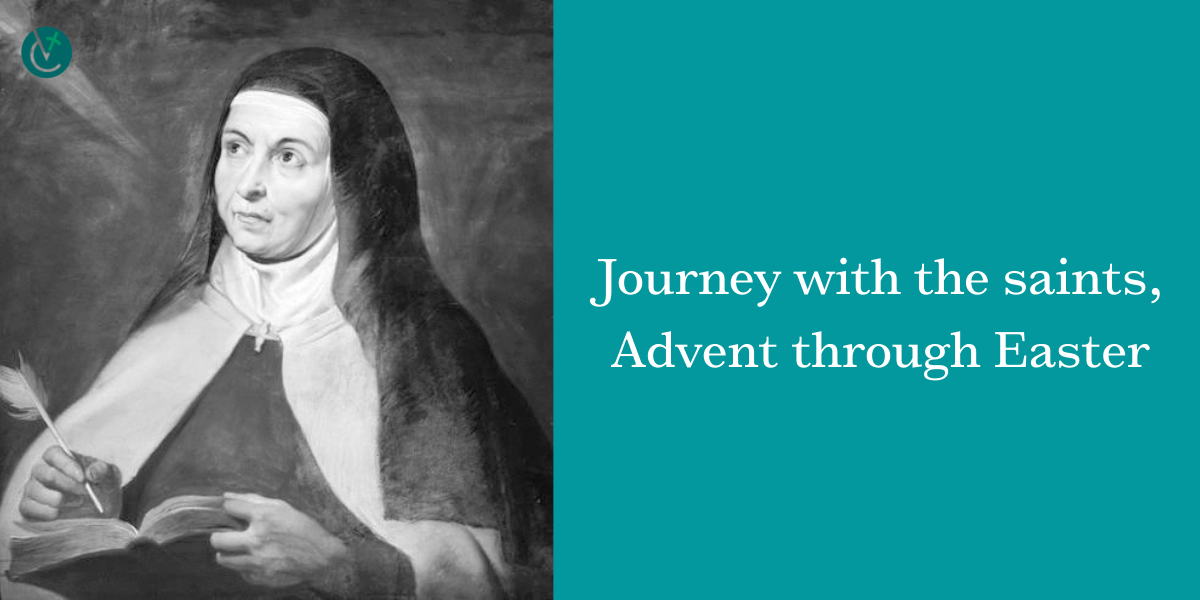 Journey with the saints Advent through Easter

As 2020 turns into 2021 — Advent to Easter — these saints provide timely food for thought.

In about the year 304, St. Lucia, a young Christian girl, was martyred for donating her dowry to the poor and secretly bringing food to the persecuted Christians in catacombs under Rome. She wore candles on her head to light her way so both her hands free to carry what she brought. Her feast is Dec. 13.

St. Teresa of Avila wrote a prayer of preparation for Advent: “O my God, Word of the Father, Word made flesh for love of us, you assumed a mortal body in order to suffer and be immolated for us. I wish to prepare for your coming with the burning desires of the prophets and the just who in the Old Testament sighed after you, the one saviour and redeemer. O Lord, send Him whom You are going to send. … As you have promised, come and deliver us.”

In her autobiography, “Story of a Soul,” St. Thérèse tells the story of a “miracle on a small scale” that was needed to give her strength of character all at once, and God worked this long-desired miracle on Christmas Day, 1886. “On that blessed night, the sweet Infant Jesus, scarce an hour old, filled the darkness of my soul with floods of light. By becoming weak and little, for love of me, he made me strong and brave; he put his own weapons into my hands, so that I went from victory to victory, beginning, if I may say so, ‘to run as a giant,’” she wrote.

St. John of the Cross

St. John of the Cross has been called the great mystic of Advent. He took on  the most menial jobs wherever he was. Before he entered religious life he worked in a hospital where he bathed diseased patients and sang songs to cheer them. Even when he was in high administrative posts he took the lowliest tasks.

The account of how this apostle reacted to news of the resurrection is recorded in the Gospel of John. Thomas said: “Unless I can see the holes that the nails made in his hands and can put my finger into the holes they made, and unless I can put my hand into his side, I refuse to believe.” He is known as “Doubting Thomas.”

He promoted devotion to Our Lady, Eucharistic adoration and care for the sick and poor.

During the 1920s, the Mexican government began persecuting the Church and outlawed religious services. Rather than obey the government, Father Rosales clandestinely carried on his ministry. Following Mass on Easter Monday, 1927, a parishioner betrayed him and he was tortured and starved. On April 21, federales marched him to a freshly dug grave. As they were about to fire upon him, one soldier refused, and though Padre Rosales begged for the man’s life, he was shot immediately after the priest’s execution.

A pope in the 4th century, little is known of him or his deeds; most accounts are fictional. One of the most popular legends has him slaying a dragon and resurrecting its victims, so he is often depicted with the dying beast. The Catholic Church celebrates the liturgical feast of St. Sylvester on Dec. 31, the day his remains were transferred to the Catacomb of Priscilla in Rome.

Otorhinolaryngology is one of the few medical specialties that has a patron saint — St. Blaise He was a doctor and bishop in Armenia. He was said to have the ability to protect people against throat infections, having cured a child who had choked on a fishbone. He was martyred under the rule of the Roman Emperor Licinio. The feast of St. Blaise is on Feb. 3.

Some people pray a 25-day novena from Nov. 30 (St. Andrew’s Feast Day) leading up to Christmas. St. Andrew was the first disciple Jesus called; thus he is sometimes known as “First-Called.” Andrew convinced his brother, Simon, to become Jesus’ disciple.