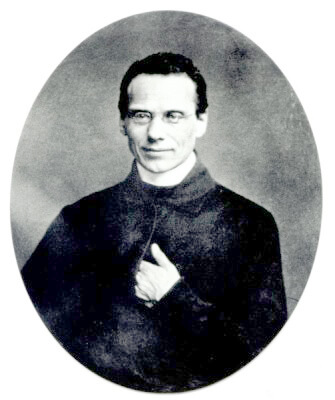 Named for the famous saint, Blessed Francis Xavier Seelos expressed a desire for the priesthood early in life, claiming that he would do all in his power to become another St. Francis Xavier.

Francis Xavier Seelos was one of 12 children born to Mang and Frances Seelos in Bavaria, Germany, in 1819.  He completed his basic education in his native country, attending the Institute of St. Stephen and the University of Munich, where he earned degrees in both philosophy and theology.  He entered St. Jerome Seminary in 1842.

It was there that he learned of the work of the Congregation of the Most Holy Redeemer, also known as the Redemptorists.  Their charism, which focused on work with the poor, the abandoned and immigrants, appealed very much to this young man.  He was attracted also to the work the order was doing among German immigrants in the United States and set sail for North America in 1843.  In 1844, he was ordained to the priesthood at the Redemptorist Church of St. James in Baltimore, Maryland.

His first assignment was in Pittsburgh at St. Philomena Parish, where he worked closely with St. John Neumann for six of the nine years he was there.  When he became the superior in the Redemptorist community, he began his work as a novice master.

Father Seelos was known for several things; he lived a simple life, preached a simple message which anyone could understand, and he was always available to those in need.  It didn’t matter to him whether the person was German, English or French, black or white, young or old.  He had a reputation as a compassionate confessor, and people came from neighboring towns for his comfort and counsel.

He was transferred to parish ministries in Maryland beginning in 1854, serving in Baltimore, Cumberland and Annapolis.  In 1860, he was proposed as bishop of Pittsburgh, but begged the pope, Pius IX, to be excused “from this act of God.”  The pope agreed to his request, and Father Seelos continued doing the work he loved.

With the outbreak of the Civil War, all men were obliged to make themselves available for active military duty.  As superior of the Redemptorist seminary, Father Seelos met personally with President Abraham Lincoln and appealed to him to exempt from the draft those students studying for the priesthood.  For the most part that happened, although some did end up serving.

At the end of his life, Father Seelos was assigned to work at St. Mary of the Assumption Church in New Orleans, Louisiana.  He approached his mission there with the same enthusiasm and compassion that he had shown throughout his priesthood.  It was while tending to yellow fever victims in New Orleans that he succumbed to the disease and died in 1867.  Although only 48 years old, his influence lasted well beyond his brief lifetime.

Father Seelos is the patron of immigrants to the United States; his feast is celebrated on Oct. 12.