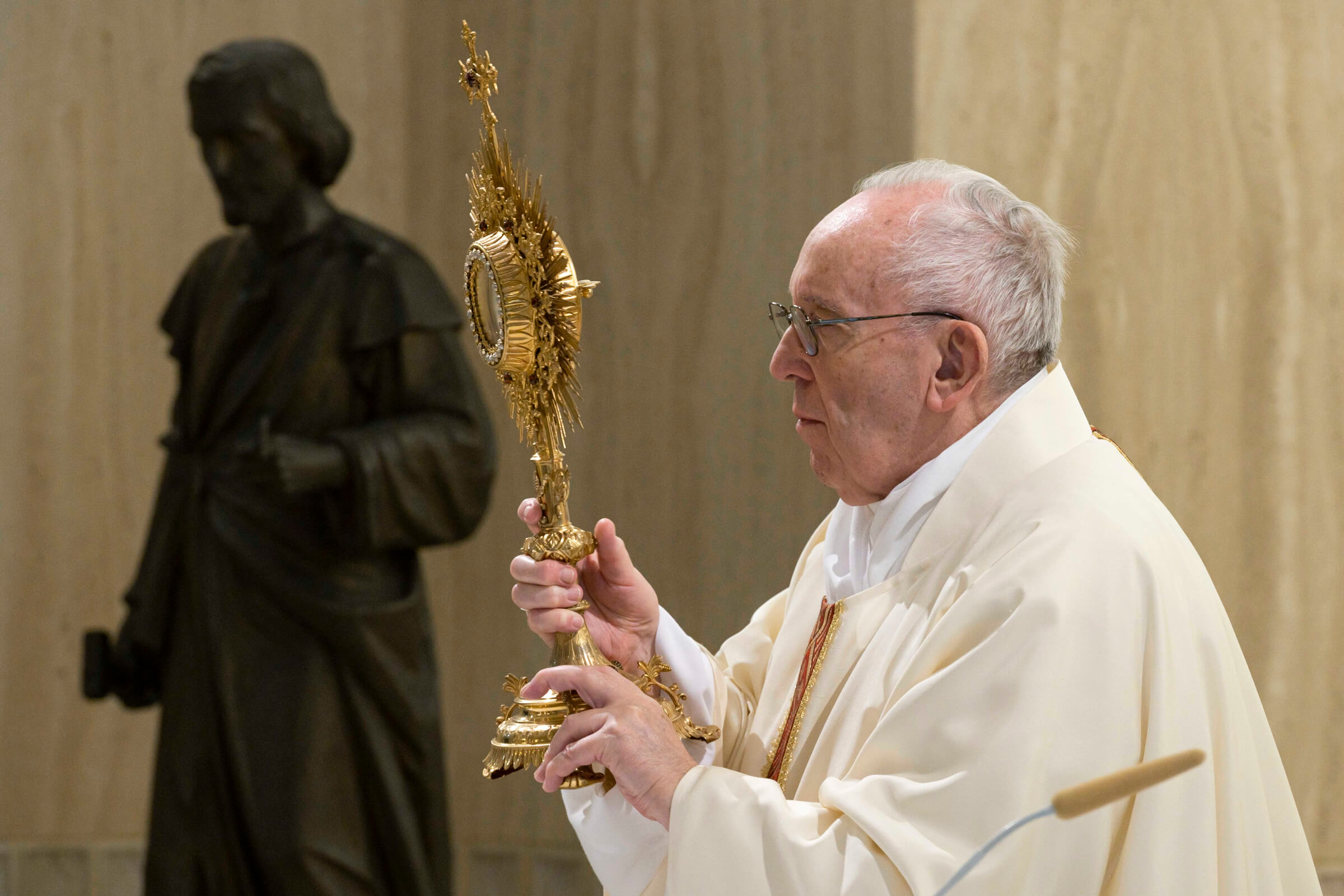 Photo Credit: CNS/Vatican Media - Pope Francis raises a monstrance during eucharistic benediction at the end of Mass May 1 in the chapel of his Vatican residence, the Domus Sanctae Marthae.

With a statue of St. Joseph, mallet in hand, placed near the altar, Pope Francis dedicated his morning Mass May 1 to workers, especially those paid unjustly or virtually enslaved.

“Today is the feast of St. Joseph the Worker,” celebrated also as International Workers Day and as Labor Day in many countries; “let us pray for all workers. All of them,” the pope said at the beginning of the Mass in the chapel of the Domus Sanctae Marthae.

He prayed that no one would be lacking a job and “that all would be paid justly and may enjoy the dignity of work and the beauty of rest.”

In his homily, focused on the creation story in the feast day’s first reading, Genesis 1:26-2:3, Pope Francis said it was “as if” God told the first human beings: “You must do this, care for this and that; you must work to create this world with me and keep it going.”

The work human beings do, he said, “is nothing other than the continuation of God’s work. Human work is the vocation received from God.”

“Work is what makes the person similar to God because with work one is a creator, is capable of creating, of creating many things, including creating a family to keep going,” the pope said. “And this gives dignity to the human person. The dignity that makes one resemble God. The dignity of labor.”

Unfortunately, he said, the dignity of labor is “often trampled on,” and not just by slavery in the past centuries, which everyone recognizes as “barbaric.”

“Even today there are many slaves, many men and women who are not free to work — they are forced to work to survive and nothing more,” he said. There are those who are forced to work for little or no pay, who are mistreated and even beaten, but have no escape, he added.

Pope Francis said he can imagine someone saying, “‘Yes, Father, it’s true, but because it happens so far away, it’s hard to understand. Because here …’ Yes, even here among us. I’m thinking of day laborers whom you make work for a pittance and not for eight, but for 12, 14 hours a day. This happens today, here.”

“Think about the domestic who is not paid justly, is not guaranteed social assistance, who cannot retire. This doesn’t happen just in Asia. Here,” he said.

“Every injustice done to a person who works is a trampling on human dignity, including on the dignity of the one who commits the injustice,” the pope said.

The vocation God gives, he said, “is so beautiful: to create, re-create, work. But this can be done only when the conditions are fair, and the dignity of the person is respected.”

Pope Francis ended his homily praying for all workers, for all who fight for justice for workers and for all employers who treat their workers fairly, even if it costs them some money.

And pointing to the statue of St. Joseph “with his work tools in hand,” Pope Francis prayed that the saint would “help us fight for the dignity of labor so that there is work for all and that it would be worthy labor, not slave labor. May this be our prayer today.”