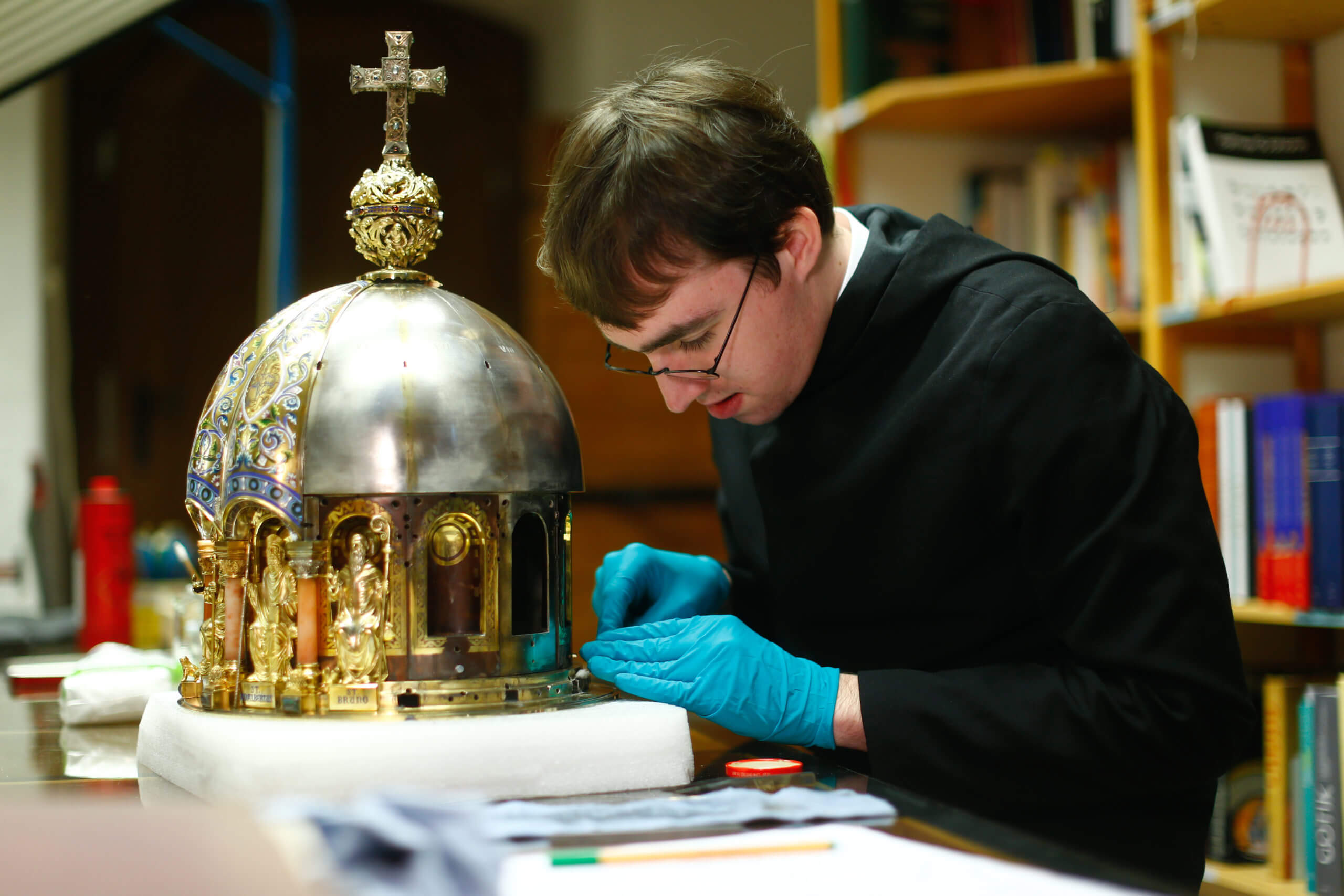 Photo Credit: CNS/Thilo Schmuelgen, Reuters - Restorer Luke Jonathan Koeppe cleans part of the shrine with the relics of St. Corona at the cathedral in Aachen, Germany, amid the coronavirus pandemic.

She had become nearly forgotten. Little is known about the young woman who was killed for her Christian faith, presumably in the second century A.D. But now, a pandemic is shedding light on her: St. Corona.

The German Catholic news agency KNA reports the Church’s martyr records put the year of her death at 177 A.D. It is not certain where she lived. A Greek account put it in Syria, while a Latin one said it was Marseilles, France, and Sicily. What is proven is that she began to be honored starting in the sixth century in northern and central Italy. All the rest is the stuff of legend — propagated above all by monks in the Alpine region.

“This has nothing to do with the real history of Corona, but instead with stories aimed at deepening the faith,” said Manfred Becker-Huberti, a German theologian known in the Rhineland as an expert on folklore and customs.

She is above all revered in Germany’s southern state of Bavaria and in Austria, KNA reports. A chapel is dedicated to her in Sauerlach, near Munich. In the Bavarian Diocese of Passau, two churches recall her name, while in the province of Lower Austria and outside of Vienna there are two towns named “Sankt Corona.” In the cathedral of Munster in northwestern Germany, there is a St. Corona statue, currently decorated with flowers placed at its base. Some relics of the martyr were taken to the Prague cathedral in the 14th century.

As early as the 10th century, under Holy Roman Emperor Otto III, St. Corona relics were taken to Aachen. In 1910, during excavation work at the cathedral there, archaeologists came across the relics, which were removed from a crypt and placed in a shrine. This three-foot-tall, 220-pound relic has, until recently, been kept in storage in the Aachen cathedral treasure vault. With the coronavirus pandemic, experts have taken it out to dust it off and conserve it.

St. Corona is not the namesake for the virus. The Latin word “corona” means “crown,” an indication that the young saint had achieved the “crown of eternal life” because of the steadfastness of her faith. The connection with the coronaviruses, named because of their crown-like structure, is just a coincidence.

Over the centuries, St. Corona was often prayed to by people seeking her help in times of trouble, be it heavy storms or livestock diseases.

People believed she had a positive influence regarding money matters, with “coronae” (crowns) being the name given to coins. As a result, treasure-hunters often invoked her name. In view of how COVID-19 has triggered an economic crisis, with many people fearful about money matters looming ahead, it might not be at all far-fetched for them to call on the saint for support.

In the Catholic Church’s calendar of saints, her holiday is May 14.