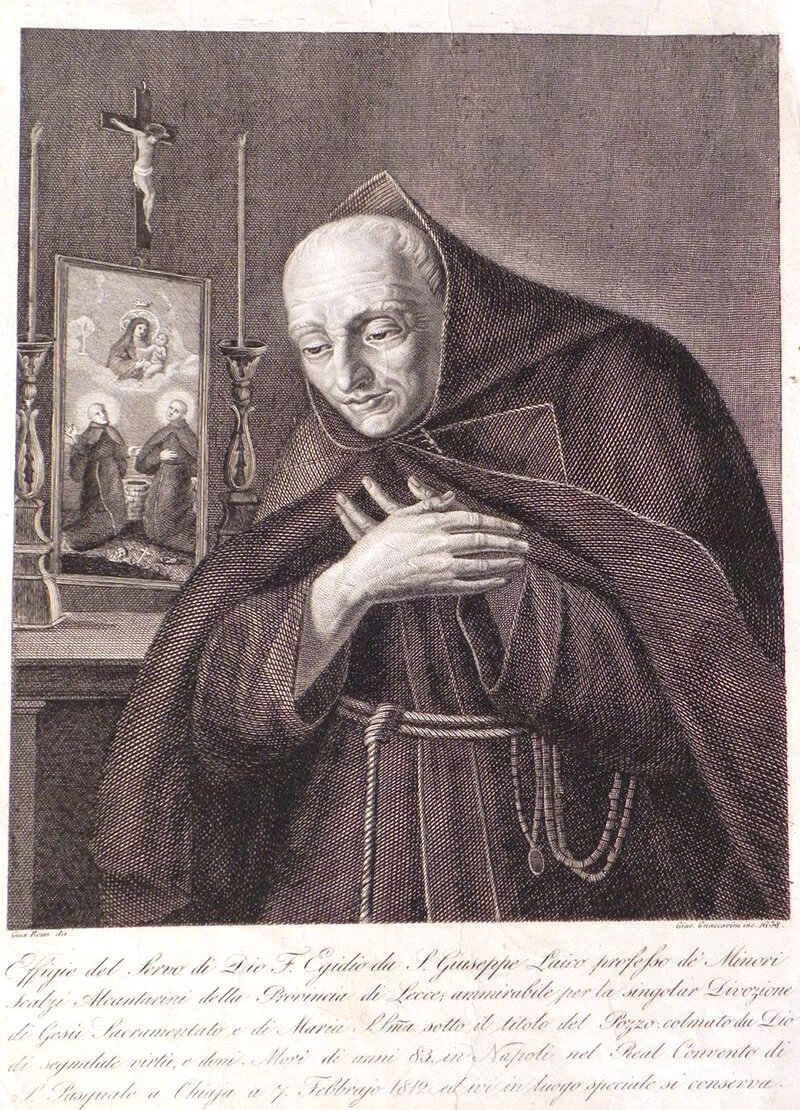 St. Giles Mary of St. Joseph is living proof of St. Mother Teresa’s famous quote:  “Not all of us can do great things. But we can do small things with great love.”

Giles’ given name was Francesco, born to very poor but pious parents in the town of Taranto, Italy, in 1729. While still quite young, Francesco learned the rope-making trade and was reportedly very good at it. It served him and his family well when his father died in 1747, leaving Francesco, at age 18, as the sole support of his mother and siblings.

Though he took up his responsibilities willingly, Francesco also felt the call to religious life. By the time he turned 25, he was able to secure his family’s financial future and subsequently applied to the Discalced Friars Minor in Naples. Though he wanted to become a priest, he lacked sufficient education and was received as a lay brother instead. For the next nearly six decades Francesco, now St. Giles Mary of St. Joseph, acted as the porter and gatekeeper at his monastery’s seminary.

It was in that position that he discovered his true vocation. As the brother who opened the door to everyone who rang the bell, Giles came into contact with some of the poorest and most wretched citizens of Naples – people who he had a special gift to help. He seemed to have a particular ministry to the sick, even going outside the city gates to tend to those suffering from leprosy, in addition to serving at St. Pascal’s Hospice in the city. He often carried with him an icon of the Blessed Virgin, called “Our Lady of the Well,” as he made his rounds.

Giles was himself in poor health much of the time. He suffered from sciatica, a condition that caused him severe leg pain and often forced him to walk with a cane.  He also struggled with asthma and, in his later years, dropsy. None of this, however, deterred him from carrying out the work that he felt God was calling him to do.

His community also gave him the task of distributing alms and food to the poor as well as begging for his fellow friar’s sustenance. Almost miraculously, no matter how much Giles distributed, there was always enough to meet everyone’s needs. He gave credit for this to St. Joseph, who, he said, always took such good care of Mary and Jesus. His devotion to Joseph remained strong throughout his religious life.

As he made his way through the streets of Naples, he would urge the people over and over again to “Love God, love God.”  The people whom he encountered even gave him a nickname – “Consoler of Naples.”

Finally, in 1812, at the age of 81 and after decades of humble service to all he came into contact with, Giles died. A “model of authentic evangelization,” Giles’ feast day is Feb. 13.