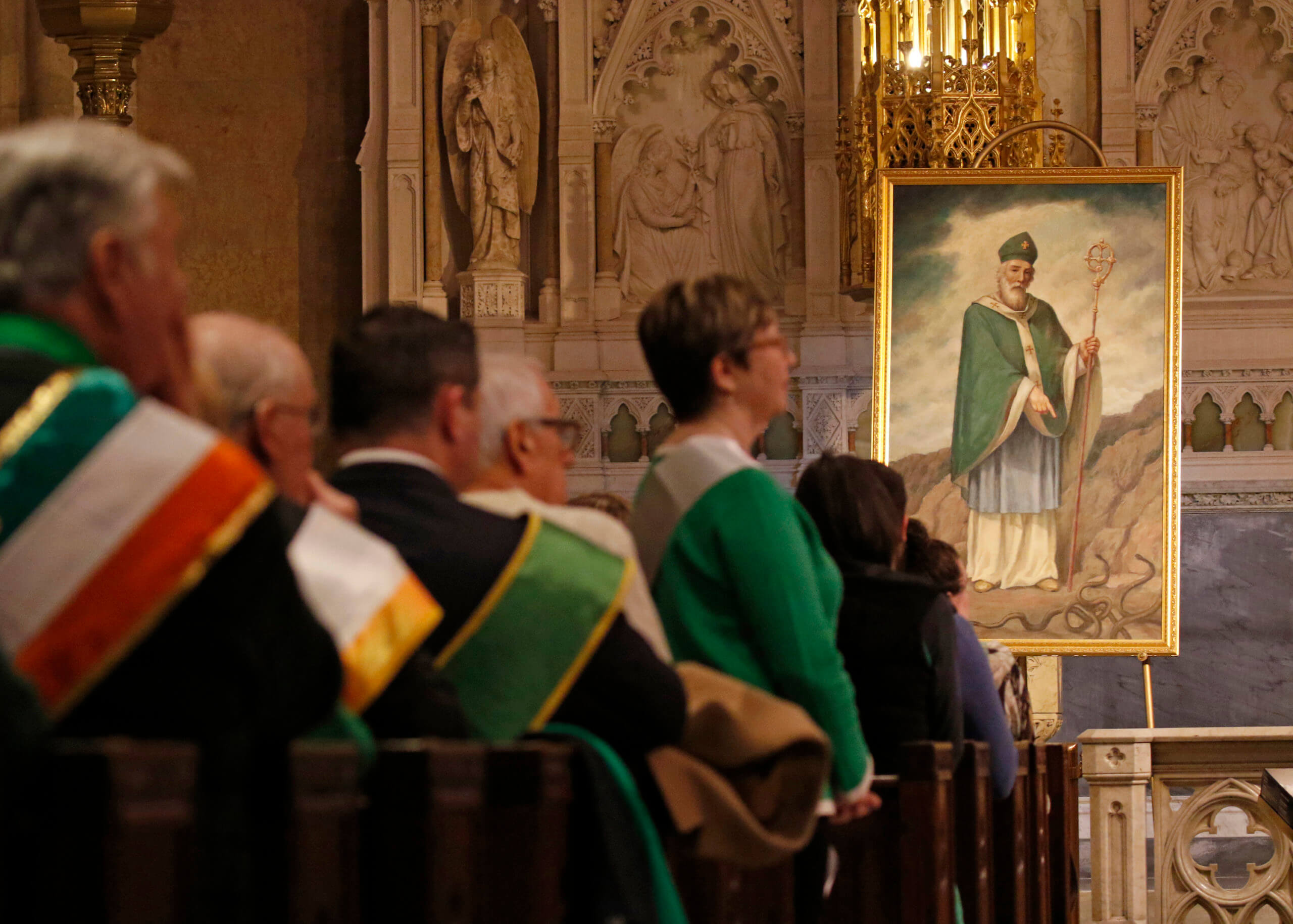 Photo Credit: CNS/Gregory A. Shemitz - A portrait of St. Patrick, patron of the Archdiocese of New York, is seen during the St. Patrick's Day Parade Mass at St. Patrick's Cathedral in New York City March 16, 2019.

Perhaps one of the most popular and well-known saints comes to us from Ireland. St. Patrick, whose feast day falls on March 17, is celebrated in the secular as well as the sacred world, often with robust fanfare.

The real St. Patrick, however, was not native to Ireland; he was likely from Britain and was brought across the Irish Sea at the age of 16 as a slave. Sold to a master who dealt in pigs and sheep, Patrick spent six long, lonely and di cult years as a shepherd, turning to God as his only comfort and thus reigniting his previously languishing faith.

When Patrick was finally able to escape his slave- master and return to Britain, the last thing he would have imagined was going back to the place where he had been dragged against his will. God apparently had other plans for the young man, because Patrick not only found himself returning to Ireland – this time as God’s servant rather than man’s slave – but he became the great saint of conversion among those he would one day consider to be the people of his heart.

Ordained a priest and then consecrated as a bishop, Patrick was in his forties when he landed again on Irish shores. He had no illusions about the difficulty of the work he was about to undertake; Ireland at the time was thoroughly pagan, and Patrick was not welcomed by the Druids, who saw him as a troublemaker.

But his years as a shepherd among these people were not wasted; because he understood them and their beliefs so well, he was able to take many pagan symbols and incorporate them into expressions of Christian faith, thus making it easier for the Irish to accept the truths he taught. The shamrock and Celtic cross are two examples still familiar to us today.

Patrick’s efforts were incredibly successful; within a relatively short time, it was Ireland that was sending missionaries to rekindle the Christian faith in the rest of Europe. Besides Ireland, Patrick is also the patron saint of engineers and Nigeria.

St. Patrick Church in Fairfield is part of one of the oldest parishes in Vermont. It was erected as a parish in 1858 by Burlington Bishop Louis deGoesbriand. In 1905, the church, rectory and barn burned during a Christmas Day fire. It was rebuilt and is home to a stained-glass window that bears Bishop deGoesbriand’s name as well as those of the two founding priests of the parish.  Throughout the church are St. Patrick statues, shamrocks adorning the altar and a relic of St. Patrick. Every year, the parish hosts a celebration on his feast day.