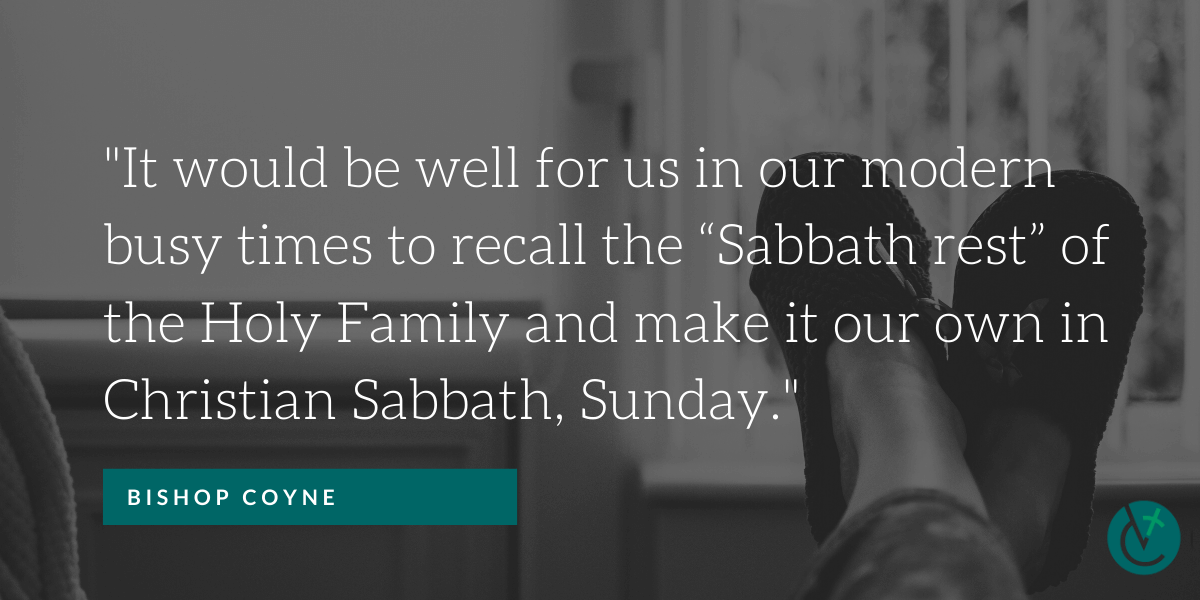 Do you think the Holy Family took vacations? Probably not, if we are talking about a vacation in the modern sense.

The idea of an extended leave from work to relax and unwind is a modern development made possible for the working class within the labor changes and turmoil of the industrial revolution.  So, probably no week on the shore of the Sea of Galilee for Mary, Joseph and Jesus.

That doesn’t mean they didn’t travel or ever leave Nazareth. In Luke’s Gospel, we’re told that the Holy Family traveled to Jerusalem every year for the Feast of Passover [Luke 2:41-52], a distance of about 90 miles, probably a 6-day journey.  That’s at least 12 travel days back and forth, usually in a large caravan or group, with another batch of days in the city for the celebration of Passover and the attractions of Jerusalem.

Additionally, within Judaism at the time of Jesus, there were at least three other “pilgrimage feasts” within the calendar, of lesser importance than Passover, but still well attended and, often, quite festive and lively.

So the Holy Family did not take vacations in the way we think of them, but they certainly got away from home at least once annually.

Still, life for the Holy Family was not without times of rest, and not just at night or a pause from the heat of the afternoon.  There was, of course, the Sabbath, a day of complete rest. One can well imagine Mary, Joseph and Jesus spending their time in prayer in the home or the synagogue and then just resting within the hours of the Sabbath. That weekly pause to rest in the fullness of God’s creation with no labor or even intercessory prayer — for the perfection of creation means no prayer directed toward the lacunae or imperfections of creation — is rooted in the story of Genesis 2:2: “On the seventh day God completed the work He had been doing; He rested on the seventh day from all the work He had undertaken.”

It would be well for us in our modern busy times to recall the “Sabbath rest” of the Holy Family and make it our own in Christian Sabbath, Sunday.

I have in my home a statue of the “Sleeping Joseph.” It is literally St. Joseph lying down and taking a nap. I bought it after I read about Pope Francis’ own devotion to the icon. “The Scriptures seldom speak of St. Joseph, but when they do, we often find him resting, as an angel reveals God’s will to him in his dreams,” Pope Francis said. “Joseph’s rest revealed God’s will to him. In this moment of rest in the Lord, as we pause from our many daily obligations and activities, God is also speaking to us.”

If the pope has a particular need or concern, he often will write it on a note and place it under the statue “so that St. Joseph can dream about it! In other words, I tell him: Pray for this problem!”

For me, there are days when I could put a pile of notes under my statue, but then again, if one does the best one can, one can also rest in Lord and leave the “rest” up to Him.