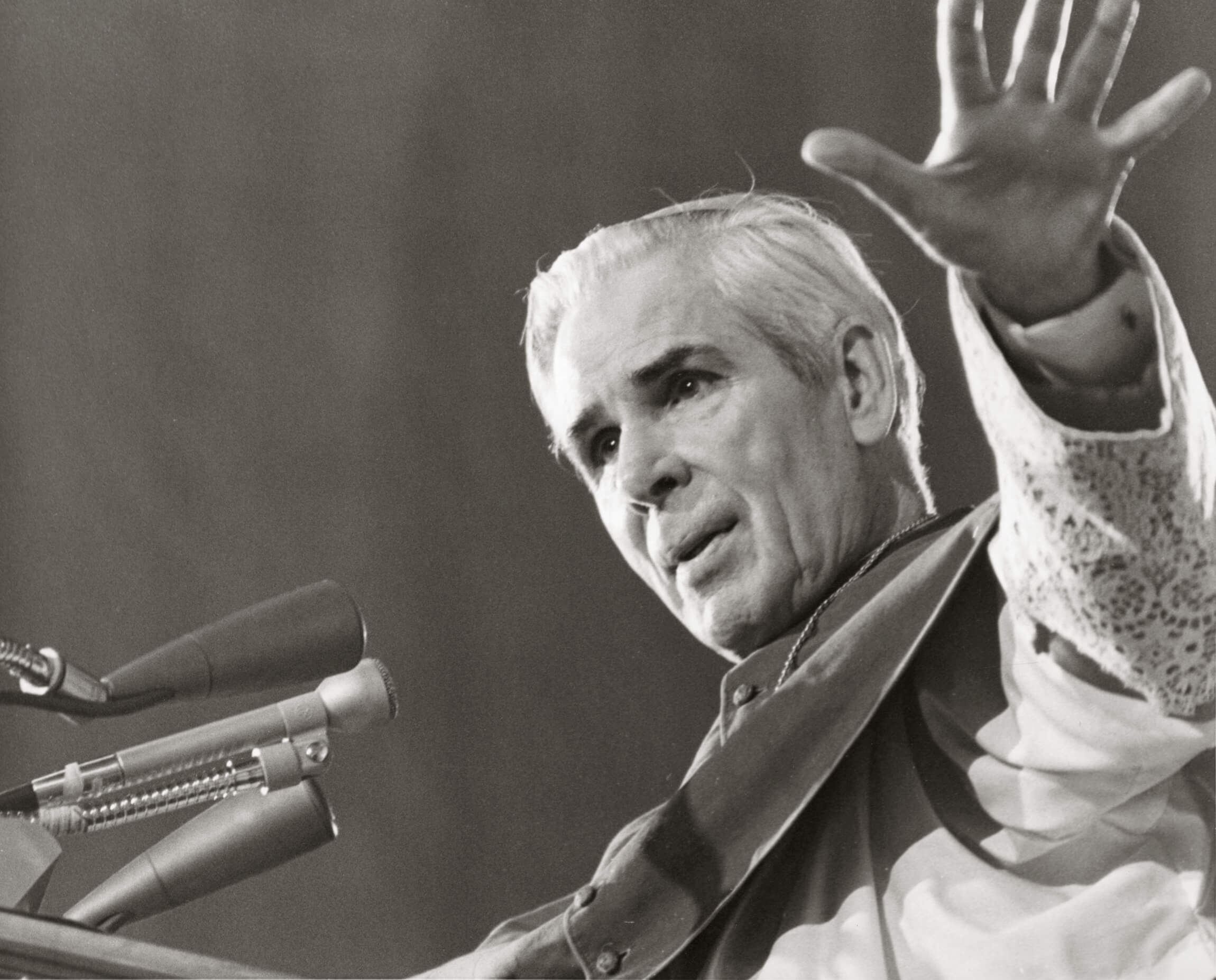 With miracle confirmed in Sheen cause, plans for beatification can begin

With “overwhelming joy,” Bishop Daniel Jenky of Peoria announced July 6 that Pope Francis had approved a miracle attributed to the intercession of Archbishop Fulton Sheen.

The pope authorized the Congregation for Saints’ Causes to promulgate the decree at an audience on July 5. In addition to affirming the miracle for Archbishop Sheen, Pope Francis recognized the heroic virtues of one woman and six men, and enrolled Blessed Bartholomew of the Martyrs in the catalog of saints, which is equivalent to canonization.

The miracle concerns the healing of James Fulton Engstrom of Washington, Illinois, who was considered stillborn when he was delivered during a planned home birth Sept. 16, 2010. His parents, Bonnie and Travis Engstrom, immediately invoked the prayers of Archbishop Sheen and would encourage others to seek his intercession after the baby was taken to OSF HealthCare St. Francis Medical Center in Peoria for emergency treatment.

Just as doctors were preparing to declare that he was dead, James Fulton’s tiny heart started to beat at a normal rate for a healthy newborn. He had been without a pulse for 61 minutes.

Despite dire prognoses for his future, including that he would probably be blind and never walk, talk or be able to feed himself, the child has thrived. Now a healthy 8-year-old, he likes chicken nuggets, “Star Wars” and riding his bicycle.

“It is truly amazing how God continues to work miracles,” Bishop Jenky said in the statement released by the Diocese of Peoria. “I am so grateful that the Vatican acted so quickly after last week’s transfer of Sheen’s remains from New York to the Cathedral of St. Mary of the Immaculate Conception in Peoria.”

Archbishop Sheen’s body had been placed in a crypt below the main altar of St. Patrick’s Cathedral in New York after his death Dec. 9, 1979. After protracted legal proceedings, his remains were brought to Peoria June 27 at the request of his niece, Joan Sheen Cunningham, and now rest in a new marble tomb in the Peoria cathedral.

In a recent interview with The Catholic Post, Peoria’s diocesan newspaper, Bonnie Engstrom said God had allowed the miracle to happen for His honor and glory.

Although the date of beatification is not known at this time, Bishop Jenky “hopes and prays” that it will be announced soon. The statement said he continues to be hopeful that it will take place during the 100th anniversary year of Archbishop Sheen’s ordination to the priesthood.

The El Paso, Illinois, native was ordained Sept. 20, 1919, at St. Mary Cathedral in Peoria and would go on to teach at The Catholic University of America in Washington and lead the Society of the Propagation of the Faith. Perhaps he is best remembered for his popular television show, “Life Is Worth Living.”

He died in 1979 at age 84. His sainthood cause was officially opened in 2003. The Church declared his heroic virtues and he was given the title “Venerable” in 2012 by Pope Benedict XVI.

In general, two miracles must be accepted by the Church as having occurred through the intercession of a prospective saint, one before beatification and the other before canonization.

News about the beatification and the life of Archbishop Sheen can be found at CelebrateSheen.com.

Share This Post
Saints, Evangelization and Catechesis, Archbishop Fulton Sheen
See More
Last Article
New manager of the Office of Safe Environment Programs
Next Article
For God’s children, it all begins with an invitation
Back to Vermont Catholic Magazine