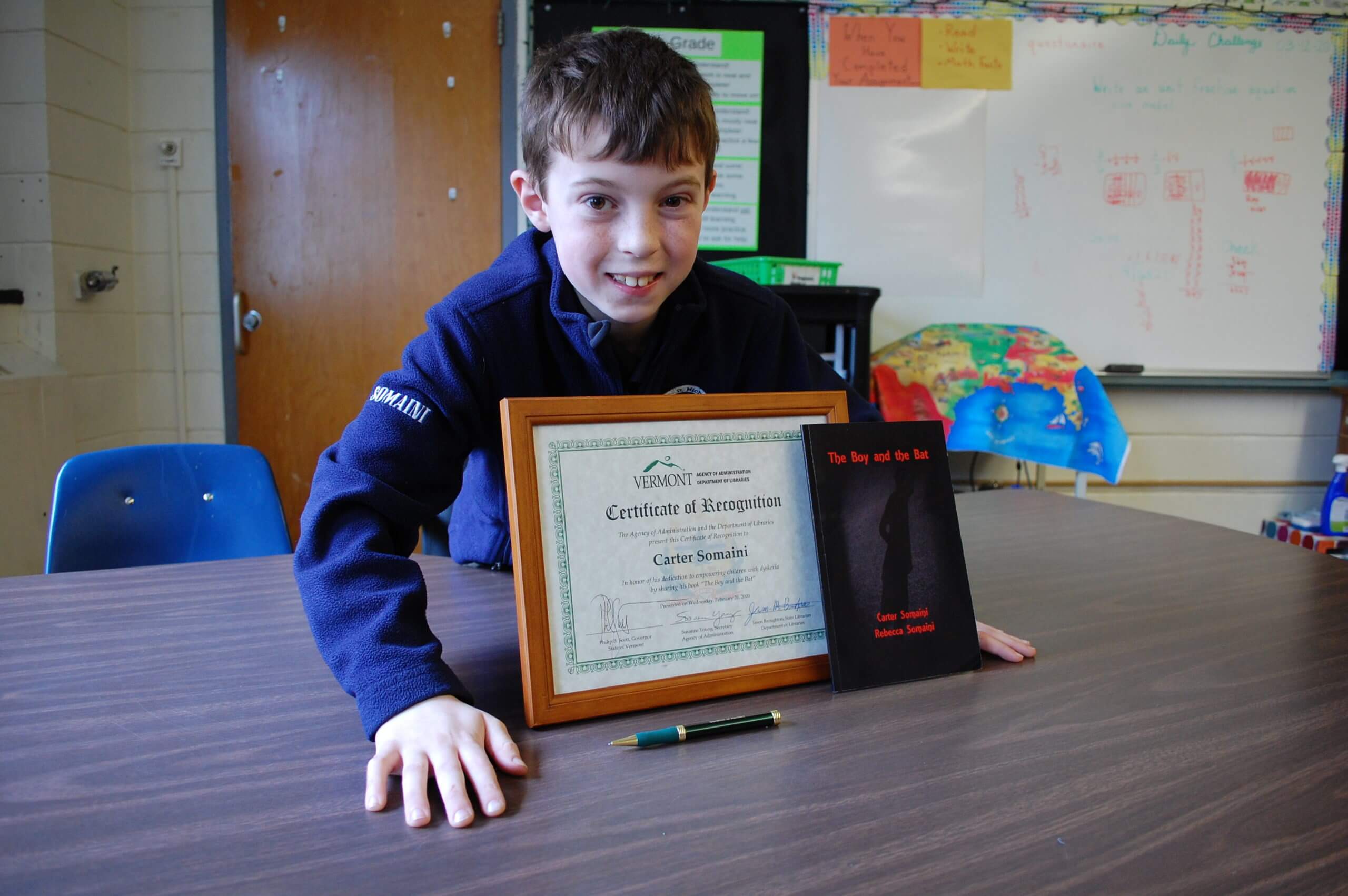 Photo Credit: Vermont Catholic/Cori Fugere Urban - Carter Somaini, 10, a student at St. Monica-St. Michael School in Barre, displays his book along with his certificate and pen from the governor.

Reading did not come easily to Carter Somaini; he was diagnosed with dyslexia in second grade.

Now in fourth grade at St. Monica-St. Michael School in Barre, he’s not only devouring the works of children’s author Dav Pilkey and the Marvin Redpost series by Louis Sachar, Carter smoothly reads the works of his own book, “The Boy and the Bat.”

It’s a book he and his mother, Rebecca, co-authored and published; they recently presented a copy to Vermont Gov. Phil Scott at the Statehouse in Montpelier.

Carter’s is a success story made possible by the efforts of his family, his teachers and principal at St. Monica-St. Michael’s.

“Everybody’s mind is wired differently. It doesn’t mean we can’t learn. Our brains are set up in different ways,” said Principal Brenda Buzzell.

Carter struggled with reading, and in second grade his teacher and principal asked his parents to refer him to the Stern Center for Language and Learning in Williston, where Buzzell once worked as Building Blocks for Literacy coordinator and national presenter.

With a detailed report of what Carter needed, school personnel and his family worked with Carter to help him improve his reading skills.

“He needed explicit teaching in order to associate the sounds of our language with the letters’ representation,” Buzzell explained. This explicit teaching entails helping the student make connections between sounds and letters and patterns of how words are read and written.

“We believe every child has the potential to learn to read and write, and we consistently look for ways to help them,” Buzzell said.

At St. Monica-St. Michael, Carter works with a reading interventionist and also with his teacher one-on-one and in small groups. And it helps that classroom teachers integrate literacy into all subject lessons.

The school uses “Fundations,” an explicit way of connecting sounds and letters and writing words correctly. On a recent school day, Carter sat on a classroom floor with other students working on a drill during which they repeated after the teacher, saying the letters she pointed to on a poster, saying a word with the sound and doing the accompanying hand gesture to represent it and then saying the sound.

It’s all helped Carter, and he dedicated his book to his teachers and family.

He dictated the self-published book to his mother who typed it. It’s about a boy with dyslexia who has a fear of reading in front of his class.  After a rough day at school, he meets a bat who teaches him that he is braver and stronger than he once thought.

Carter, who likes bats, got the idea to publish the book from his mother to help other children with dyslexia. An end note encourages readers not to be afraid to ask for help and never to give up.

In February Carter received a certificate of recognition and met the governor, secretary of education, representatives and others who were interested in learning about his book and journey with dyslexia. Later he testified in front of the House Committee on Education.

Scott later posted on Facebook: “Today I met with young author, Carter Somaini, a 4th grader from Barre whose book, ‘The Boy and the Bat,’ shows kids with dyslexia that they can do anything they set their mind to.”

For more information, go to sites.google.com/view/theboyandthebat/home.