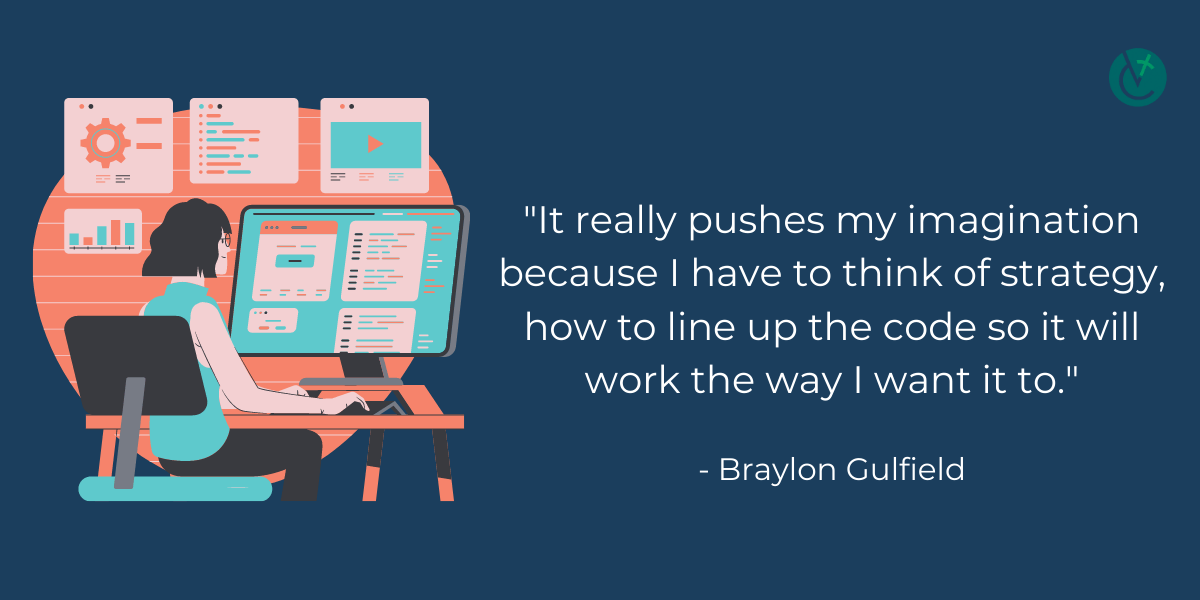 “Words you use matter. The more precise language is the easier it is to communicate with someone and have them understand you the first time,” said Amy Niggel, one of the staff members at Christ the King School in Burlington who teaches computer coding. “Computers are very good at following directions.”

But if the code is written incorrectly, the programmers won’t get the results they want. “Our world is more and more digital. Understanding how computers work helps [students] move through the world,” she said.

Christ the King School has a unique program among Catholic schools in the Diocese of Burlington, offering lessons in computer coding from a student’s earliest days there.

Niggel, for example, deliberately introduces preschoolers to concepts they will later use in coding: patterns and step-by-step thinking by, for example, following directions to move a toy on carpet squares.

Coding — how humans communicate with computers — involves the process of giving instructions to computers with the help of programming languages they understand.

Recently his seventh graders were working on a variety of projects, among them Braylon Gulfield who was writing code for a retro-style game. “It really pushes my imagination because I have to think of strategy, how to line up the code so it will work the way I want it to.”

According to Jeanne Gearon, superintendent of schools for the Diocese of Burlington, offering coding in school is a wonderful way to help students think creatively about technology: “It encourages curiosity about digital resources and can spark imaginative ideas. Coding can also be a means of supporting students in developing problem-solving skills and learning to be persistent when tackling challenges.”

Jackson Papp, a seventh grader, said coding fosters patience: ““You need a lot of patience [in coding, and that patience will help] to get through a lot of things” in life.”

Mary Beth Limanek, another coding teacher, contends that every student should have the opportunity to learn computer coding. “Coding helps nurture problem-solving skills, logic and creativity. By starting in early ed we hope to give the students a foundation for success in any 21st-century career path,” she said.

Many area high schools offer coding classes to their students, and Christ the King staff consider it important for their students to feel confident and capable in taking one of those classes when they move on from Christ the King. “Even fairly light exposure for a student can give them the confidence they might need to enter a technology-related area of study,” Limanek said.

Coding began slowly at the school, beginning with the Hour of Code offered by code.org in 2014. Laverty offered students a week of coding during technology time, and over eight years, the school has expanded the program using a number of sites and resources such as Scratch, Scratch Jr. and the CS Discoveries curriculum for middle school instruction.

“Technology is everywhere around us,” Limanek said. “Demystifying is a component of what we do. It is our hope that our students won’t think of their phones, computers or video games as something that just exists but were created by people’s imagination, creativity and hard work.”