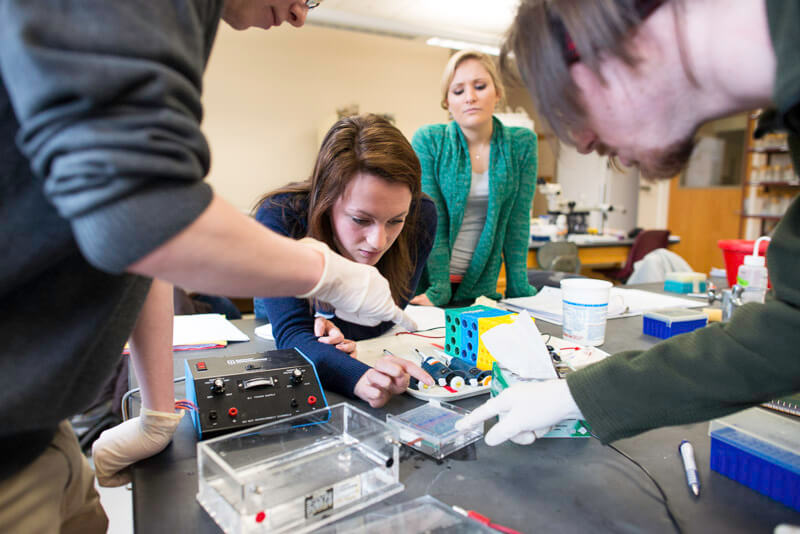 For St. Michael’s College in Colchester, where leaders hope students become properly trained to “do well and do good,” new majors in Health Science and Public Health approved by trustees in October present a practical recruiting strategy rooted in market demands and the college’s existing strengths, as well as a new way to advance the Vermont institution’s society-serving Catholic liberal arts mission.

St. Michael’s College President Lorraine Sterritt is a strong supporter of the creation of the new majors. She presented them to the Board of Trustees as “a win-win-win-win since they are rooted in rigorous study, they provide service to humanity, they lead to gainful employment, and they will help us to attract students.”

The Board of Trustees enthusiastically voted in favor of the new majors, and Board members immediately pledged a challenge gift of $1 million from their personal resources to help fund the endeavor. Sterritt and the Office of Institutional Advancement have already begun raising the matching $1 million in funding.

The number of American college students in health professions and related majors increased by more than 100 percent in the decade from about 2005 to 2015, according to the original proposal for the new St. Michael’s majors by Donna Bozzone of the college’s biology faculty.

That compares strikingly with an overall American college student population rise of just about 30 percent in a time when colleges are urgently pursuing strategies to attract more students in a keenly competitive market. Despite the past decade’s overall increase in sheer student numbers nationwide, demographic data of recent years show the pool of college-age potential applicants to be shrinking dramatically, especially in New England. A number of institutions already have folded under such pressures.

St. Michael’s has weathered this storm more successfully than many institutions, said Sterritt, and long has offered strong and popular majors in biology and other traditional “pre-med” sciences.

Yet, even with the college’s well-established record placing students in medical, dental, veterinary and other health care professional schools, as well as many of the nation’s top science graduate programs, St. Michael’s administrators say that creating these two more overtly career-focused majors — with a nearly ready-made strong faculty to deliver them — seemed a natural way to meet growing demands from applicants and their families for career-oriented studies within the liberal arts framework. The College’s Career Education coaches say that employers regularly express their preference for liberal arts graduates because such hires are typically better-rounded individuals and better problem-solvers than those from narrower professional programs, bringing to the job a deeper understanding of the world and society and making them better longer-term prospects to advance in leadership roles.

More than many colleges, St. Michael’s also hangs its hat on a culture of service to others as exemplified in its prominent fire and rescue squad and vibrant campus ministry service organization MOVE (Mobilization of Volunteer Efforts). This prevailing community ethos permeates academic programs too, and Sterritt has spoken more than once since starting her job on July 1 of the imperative she feels that graduates be well-positioned by their education to “do well and do good.”

Bozzone said both “Health Science” and “Public Health” majors, as offered at St. Michael’s, will be enhanced significantly by having valuable liberal arts courses among requirements and elective options — philosophy, religious studies, ethics, anthropology, economics, political science and languages— fields that would be less pronounced or missing from larger research-university offerings in the health care fields. She explained how the two new St. Michael’s majors differ in emphasis from one another:

“Public Health is a program that encourages people from across disciplines to work together to discover the causes of the world’s health problems and develop solutions,” she said, “while Health Science combines biomedical instruction with an understanding of how psychological and societal factors impact health.” Both majors also are significantly strengthened by the recent incorporation two years ago of new majors and faculty in Data and Statistics at St. Michael’s.

Internships will be a central component for these new majors, Bozzone said, with partnerships already in place with the American Cancer Society, Red Cross, Burlington and Boston hospitals, physical therapy practices, a juvenile rehabilitation facility and an agency advocating for the aging, to name a few. Original research projects will be stressed by advisers in the new majors too as part of the vastly expanded and well-funded St. Michael’s research culture.

While medical, dental or veterinary school will be the goal of many in the new majors, Bozzone said that entry-level positions are available with such a background at hospitals, community health centers, clinics, private practices, relief organizations, home health care agencies, rehabilitation centers, hospices, sports and fitness facilities, refugee and immigrant organizations and non-profits or nursing and residential care facilities.