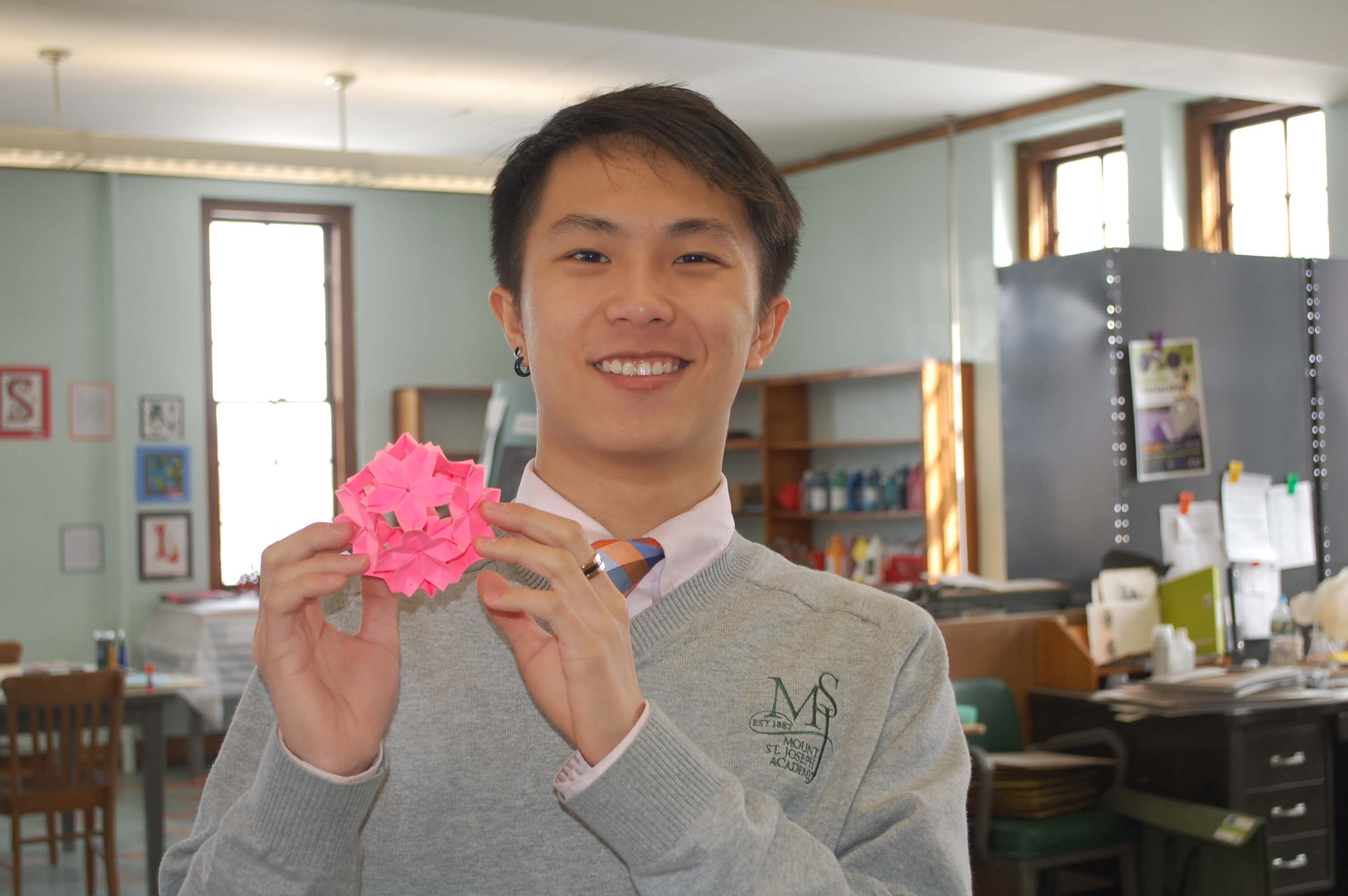 Origami: Creations of the heart

Rain He is blessed with patience.

The result of all this folding is a collection of artwork done in origami, the art of paper folding often associated with Japanese culture.

Rain, a friendly 19-year-old senior at Mount St. Joseph Academy in Rutland, is one of three students in teacher Sally Keefe’s Advanced Placement Art class. “He is very precise with his work,” she said, explaining that origami explores all of the elements that are associated with sculpture like form, mass, proportion and texture.

“One might not think of origami as sculpture, but it is an interesting combination of sculpture and math,” she added.

By calculating where folds should be made and how the forms should be shaped, a flat piece of paper — sometimes many pieces of paper — become spheres or receptacles or movable objects. “That’s the fascination — to take a one-dimensional piece of paper and have it take form,” Keefe said.

Butterflies are one of the projects that take the least amount of time — about two hours. The multicolored penholder with its 400 pieces of folded paper took Rain about 20 hours to make.

Once he gets into the rhythm of the repetitive folds, he can take his mind off the folding and do it while watching a movie, one of his favorite pastimes.

“It’s your heart working” to create something beautiful, he said.

Rain is from Nanning, Guangxi, China, the only child of a businessman and a telecommunications worker. He came to Mount St. Joseph Academy as a freshman, living with a host family and returning home in the summers.

Now he is planning to attend college in the United States or Canada to study to be a physician or psychologist.

“Art is my personal hobby,” he said in nearly proficient English. “I like it.”

Though not a sports enthusiast, he has participated in indoor track and cross-country, is a member of the MSJ chorus and plays the drums in the school band.

Rain became interested in origami in preschool when he saw a friend making things out of folded paper, then he had origami lessons in elementary school art class, always the first to understand the task and the first to finish.

But because in China there is a greater focus on grades than hobbies, Rain’s origami hobby was on hiatus as he got to middle school. “Academics are very competitive in China, so there is not a lot of time for hobbies,” he said.

But during his sophomore year at Mount St. Joseph, his interest in the paper-folding hobby was reignited as he thought about Chinese spring festivals. He remembered how much he had enjoyed origami, something that reminded him of his family and his home.

He enhanced his skills by watching YouTube videos about origami. “I never saw origami as hard. You just need patience,” he said. “Everyone can do it. I was just lucky to be more patient and more interested than other people.”

And because people appreciate his art (though friends sometimes like to play with some of the origami objects he makes), Rain said he is bringing honor to his school.