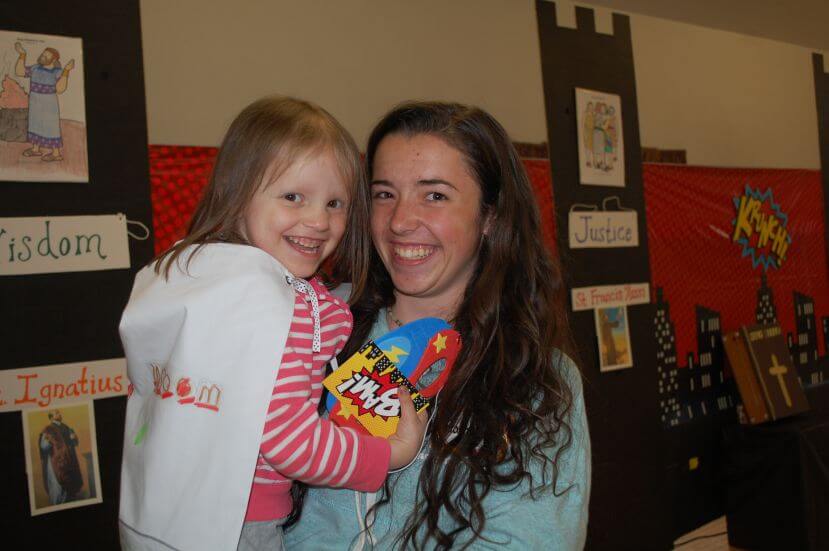 Vermont Catholic
Schools
0 Comments
These students from Rice Memorial High School in South Burlington could have spent the first week of their summer vacation catching up on sleep, working, spending time with family and friends or going to the beach, but they chose to travel to the Canadian border town of Derby Line to assist with a vacation Bible school for children and visit residents of an elder care home.

“They chose to spend this time helping others…and entered into it with a spirit of love,” commented Father Scott Gratton, head chaplain at Rice and one of the chaperones.

In addition to helping at the Mater Dei Parish vacation Bible school at St. Edward Church and visiting residents of Michaud Manor, the high school students shared morning and night prayer and attended daily Mass during their June 12-16 service trip.

About 30 children age 3 to 11 and 10 parish middle and high school student helpers — part of the Mater Dei Young Apostles youth group — participated in the afternoon classes at which the Rice students served as volunteers and mentors as well as acting in skits about virtues, preparing snacks, cleaning/setting up crafts and leading games.

“It’s important for the younger children to see such vibrant teens,” said Steve Gonyaw, co-director of the Vacation Bible School with his wife, Ann, who added, “The Rice students make the parish youth (helpers) feel part of a bigger team.”

At Michaud Manor – one of the elder care homes run by Vermont Catholic Charities Inc. – the Rice students visited with residents, played games, helped garden and played music. Resident Tom Day liked playing catch with a plastic ball in the lobby and said the teens were all “nice guys, nice girls.”

Resident Georgette Routhier liked having the students visit, saying it was a good change in the routine to have a visit from such pleasant young people.

“It was wonderful” having them visit each of the five days of their service trip, said Michaud Manor Administrator Anne Steinberg. “It’s been good social interaction. They all had fun. It was uplifting for everybody.”

Ann Gonyaw praised the Rice students for their enthusiasm and their willingness to participate in the Masses.

“It’s fun to watch the kids be so excited about religious things,” said Rice rising senior Jordan Finkelstein. “And it’s cool to learn about the lives of the” elders at Michaud Manor.

Richard McClintock, a rising senior at Rice from St. Catherine of Siena Church in Shelburne, appreciated the children’s energy: “It brings my energy up.”

Molly Altadonna, a rising senior at Rice from St. Pius X Church in Essex Center, said, “It’s fun to be excited with the kids about their faith.”

Eight-year-old Ben Thompson of Mater Dei Parish liked having the Rice students at the vacation Bible school. “They are very nice, and all of them like me,” he said. “And they all like God.”

Elisabetta Anelli, Rice campus minister, said the service trip to Derby Line – for which some students received community service credit – was an opportunity for them to put others before themselves and make a sacrifice to serve others. “Their presence is meaningful in both places” they served, she added.

“We want to show them energetic, engaged people who are passionate about the faith at our age,” said Leo Capone, a rising sophomore from St. Patrick Church in Fairfield.