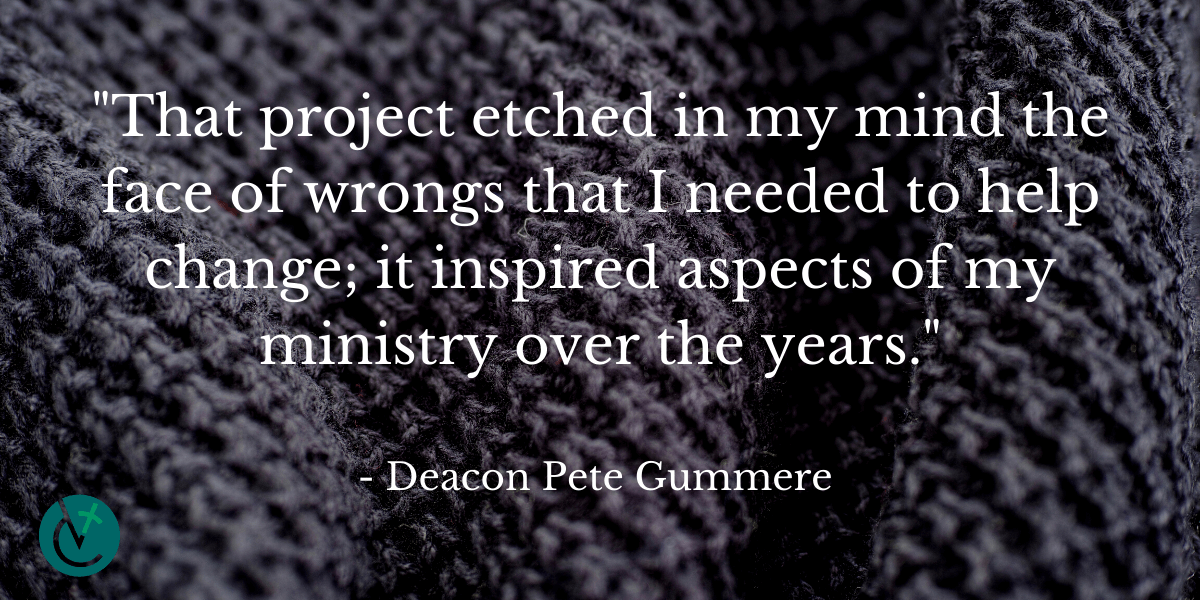 Christmas of 1964 is one I shall never forget, not because of any gifts I received or any special moment at a Christmas party I attended, but because of an authentic encounter with the poor in my midst.

I attended a private Jesuit high school in inner city Philadelphia. Living in an all-white neighborhood, I had limited direct contact with non-white persons. At the time, my attitude on racial matters paralleled that of my parents: a curious blend of absolute respect toward all, but with an imagined economic threat from the black community.

My first serious discussion about poverty and race relations came in religion class in my sophomore year. The teacher, Father John, a Jesuit,  articulated a position that was foreign to me. He pointed to grave injustice toward the non-white population, perpetuated even in the North. I had thought that injustice may have existed in the South, but I was not even certain of that.

Father John challenged us to open our eyes to issues with which we had no experience. He challenged the class to adopt one family in the immediate neighborhood of the school at Christmas. He knew of a specific impoverished family consisting of a mother with five children. He would introduce representatives of the class to the family so we could hear how best to help them.

I was one of the class representatives to visit the family.

The walk to the family’s home was just a few blocks, but the early December wind and cold were unforgettable. We entered a brownstone townhouse. From the exterior it seemed a little shabby. The five doorbells signaled that it was a multi-family dwelling. Entering the vestibule was another world. The interior was far shabbier than the exterior. The hallway was dreary with inadequate lighting. We hiked up three flights of stairs that showed the heavy wear of decades of footsteps. Bits of graffiti and peeling paint were evident on the dirty walls of the hallway.

Entering the apartment, I felt like an intruder. The family’s poverty was blatant. The furniture was well worn. The sofa and the easy chair sagged from many years of sitting and were covered with tattered drapes, not real slip covers.

Four sophomores stood awkwardly copying down information about the children’s needs. I quickly realized that the mother was asking for clothing for her children. One needed a “good warm sweater.” What size? What color? “Any color, but red is his favorite.”

How about toys? “Oh, the three boys and the older girl would love it if they could get a basketball. It could be shared.” How about the little girl? “Maybe a doll. Probably any doll. She’s not fussy.”

We reported back to the class. We scheduled a collection from classmates, a shopping trip and a delivery. The final delivery to the family was done, including everything on the list and a couple of things for the mother, too, all in time for Christmas.

In the following weeks the reality of racial discrimination and poverty became personal for me. That project etched in my mind the face of wrongs that I needed to help change; it inspired aspects of my ministry over the years.

My questions for all of us are: Do we see the impoverished in our own town? Do we teach our children to see them? Do we act to alleviate the suffering?

—Deacon Pete Gummere is a bioethicist and diaconate director. He serves at Corpus Christi Parish in St. Johnsbury.