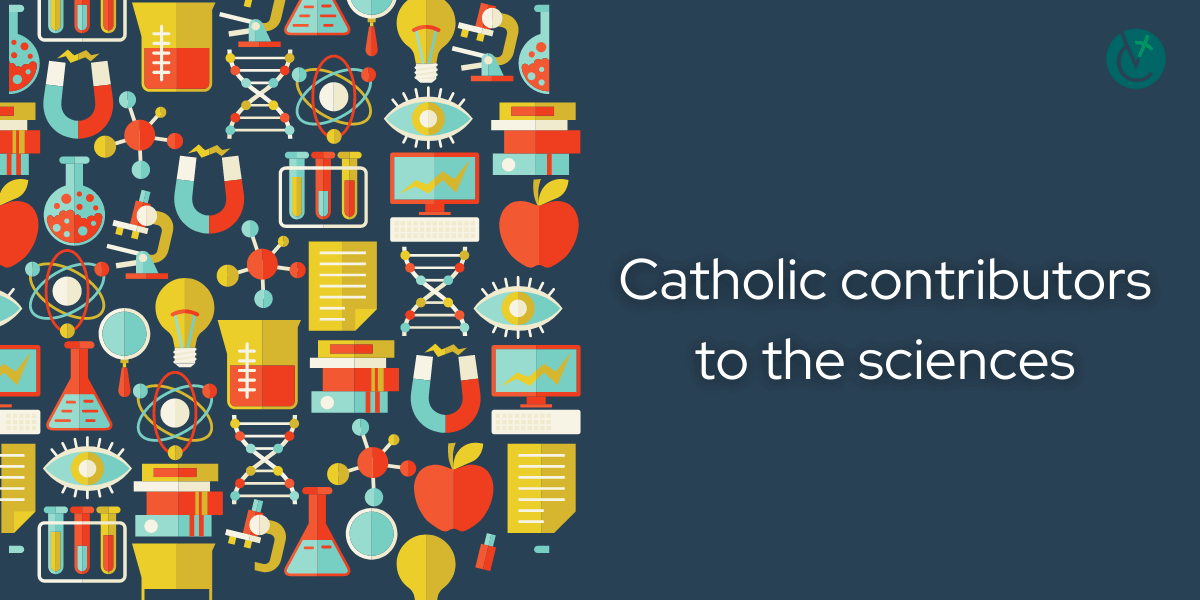 Catholic contributors to the sciences

Throughout the centuries, Catholics have been important contributors to the fields of science. Their efforts in such areas as medicine, technology, physics, chemistry and mathematics have advanced the amazing knowledge that makes the world what it is today. Here is a sampling of some of those members of the Church who have enhanced the world of the sciences and improved the understanding of God’s creation and the lives of those whom their work touched.

Guglielmo Marconi (1874–1937) – The father of wireless technology and radio transmission, this Italian inventor and developed, demonstrated and marketed the first successful long-distance wireless telegraph. In 1901 he broadcast the first transatlantic radio signal.

Father Gregor Mendel (1822-1884) — He is known as the “father of modern genetics.” The monk’s work research informed the work of several noted geneticists, botanists and biologists conducting research on heredity.

Jesuit Father Giovanni Battista Riccioli (1598-1671) — Known for his experiments with pendulums and falling bodies, he also wrote a book defending the doctrine of the Immaculate Conception of Mary.

Jesuit Father George Coyne (1933-2020) — An astrophysicist, he served as director of the Vatican Observatory for nearly 30 years. His career was dedicated to the reconciliation of theology and science, and he studied the life and death of stars.

Gerty Cori (1896–1957) — She was an Austro-Hungarian-American biochemist who was the third woman to win a Nobel Prize in science and the first woman to be awarded the Nobel Prize in Physiology or Medicine. She did research on how the body uses chemical reactions to break some carbohydrates such as glycogen in muscle tissue into lactic acid and synthesizes others.

Sister of Mercy Mary Celine Fasenmyer (1906-1996) — This mathematician was the founder of Sister Celine’s polynomials. She is most noted for her ground-breaking work on hypergeometric functions and linear algebra. Her work was used in computer automation.

Karl Kehrle (1898-1996) — A Benedictine Monk of Buckfast Abbey, England, he was a beekeeper and world authority on bee breeding. His bee cross-breeding resulted in the legendary “BuckfastSuperbee,” which many authorities say is the hardiest and most prolific honey producer ever bred.

John Montgomery (1858-1911) – His gliding experiments of the 1880s are considered by some historians and organizations to have been the first controlled flights of a heavier-than-air flying machine in America. He was a physicist and inventor of gliders and aerodynamics.

Blaise Pascal(1623-1662) – French mathematician, physicist and religious philosopher, he laid the foundation for the modern theory of probabilities. He invented the Pascaline, an early calculator.

Vladimir Prelog(1906-1998) – This Croatian-Swiss organic chemist was the winner of the 1975 Nobel Prize for chemistry. He did research on the connection between the structures of organic molecules and how they react.

Sister Miriam Michael Stimson (1913-2002) – An American Adrian Dominican Sister and  chemist, she was the second woman to lecture at the Sorbonne. She contributed to the understanding DNA and was  listed in several editions of “American Men of Science.” She taught and did research at Keuka College in New York.

Evangelista Torricelli (1608-1647) – The inventor of the barometer, he was the first man to create a sustained vacuum. He also contributed to the development of the calculus.

Jadwiga Szeptycka (1883-1939) —A Polish archeologist and ethnographer, writer and social activist, she published a booklet explaining the Greek Catholic liturgy to the followers of the Latin rite.

Santiago Ramón y Cajal (1852-1934) – A neuroscientist, pathologist and histologist specializing in neuroanatomy and the central nervous system, he was awarded the Nobel Prize for his contributions to neuroscience.

Stephanie Kwolek (1923-2014) – She was an American chemist who developed Kevlar, a lightweight, heat-resistant, strong material used in bullet-proof vests. The Royal Society of Chemistry grants a biennial Stephanie L. Kwolek Award to recognize exceptional contributions to the area of materials chemistry from a scientist working outside the United Kingdom.

Mary Kenneth Keller (c.1914-1985) – A Sister of Charity, she was the first American woman to earn a doctorate in computer science. She helped develop BASIC, a family of general-purpose, high-level programming languages.

Fibonacci (c.1170-c.1250) – He popularized Hindu-Arabic numerals in Europe and discovered the Fibonacci sequence: each number is the sum of the two preceding ones, starting from 0 and 1. Applications of Fibonacci numbers include computer algorithms, data structure and graphs.

Louis Braille (1809–1852) – He invented the Braille reading and writing system, used by the blind or visually impaired and adapted for use in many languages.

Karl Landsteiner (1868–1943) – This Austrian biologist, physician, immunologist and Nobel Prize winner identified and classified the human blood types. He also studied the chemistry of antigens, antibodies and other immunological factors that occur in the blood.

Blessed Guadalupe Ortiz(1916-1975) — One of the first female members of Opus Dei, this Spanish-born woman earned a doctorate in chemistry and established a mobile medical clinic for the poor in Mexico.