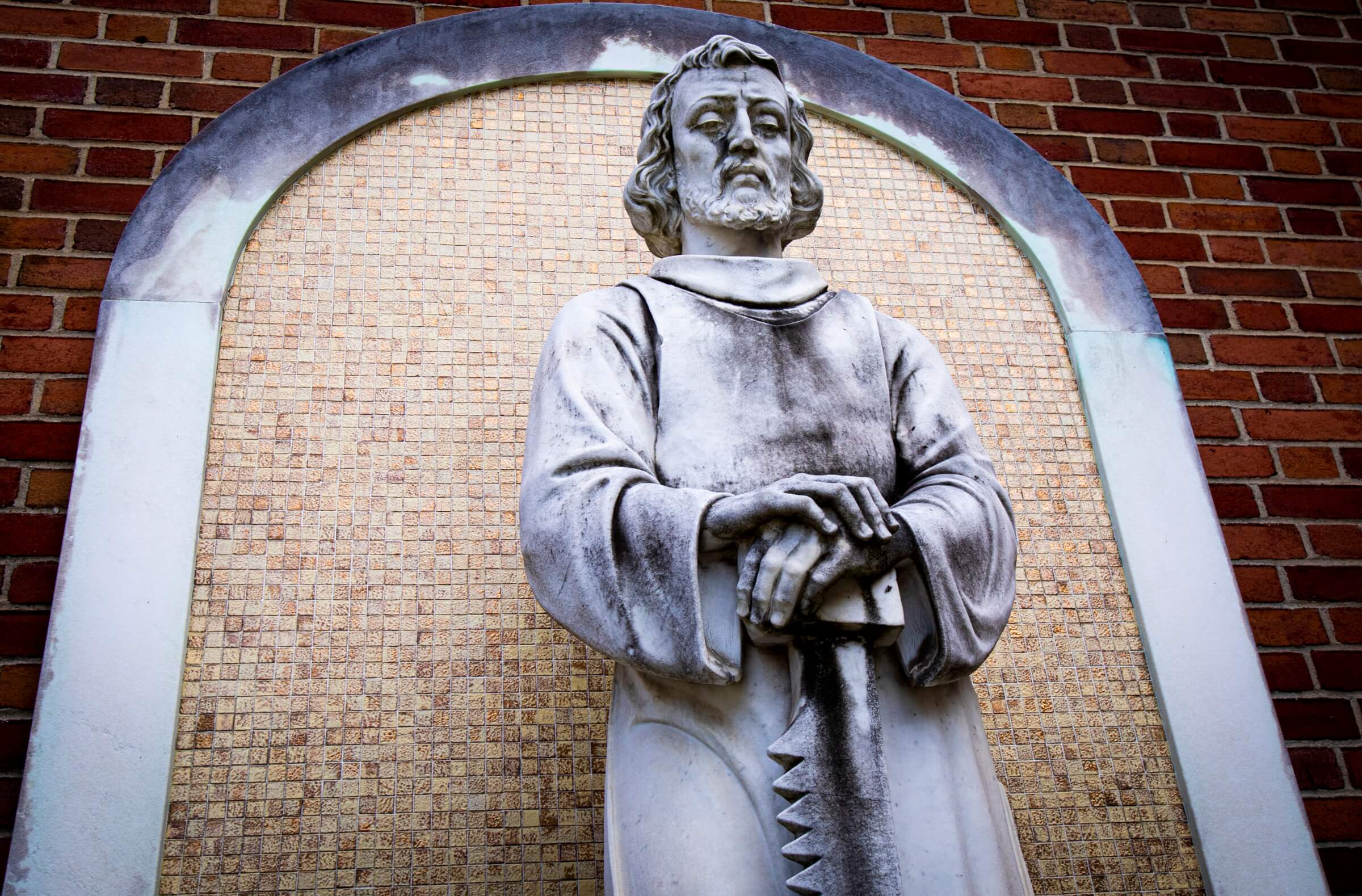 Photo Credit: CNS/Chaz Muth - The afternoon sun shines on a statue of St. Joseph in front of the St. John Vianney Regional School in Allentown, Pennsylvania, in 2019. The feast of St. Joseph, patron of the universal Church, is March 19.

‘Creative courage’ for the new year

Thank God we’ve finally left 2020 behind! We’ve entered a new year with great hopes for better times, along with a little trepidation. For many of us, V-day – when we roll up our sleeves and get vaccinated – will likely be the biggest event of 2021.

In 2020 we learned to embrace “the adventure of living one day at a time” rather than counting on ‘best-laid plans.’ We maintained constant vigilance and drafted policies and procedures for every likely scenario – even as circumstances changed every day.

The irony is that our frail seniors are teaching us how to face the fear and uncertainty of each day with patience and humor. The elderly have surrendered nearly all of their independence, personal autonomy and direct contact with loved ones, in exchange for safety, unguaranteed though it may be.

Their patience, resilience and perspective are stunning. A researcher on healthy aging has termed these qualities “crisis competence” and the elderly are experts at it, even when they need assistance to meet basic daily needs.

I have found solace in the basics of our Catholic faith, even when the sacraments have been out of reach. Resting with Jesus, Mary and Joseph at the manger during the Christmas season – even as we were forced to go back into lockdown – helped me to find meaning in the midst of our trials.

On Dec. 8, 2020, Pope Francis announced a “Year of St. Joseph” to celebrate the 150th anniversary of the declaration of Joseph as patron of the universal Church. The focus on St. Joseph is timely.

With his customary realism, Pope Francis reflects on Joseph’s acceptance and courage in the face of inexplicable circumstances. “Only the Lord can give us the strength needed to accept life as it is,” he writes, “even when we fail to understand it completely.”

The pope suggests that God chose Joseph to guide the beginnings of Christ’s earthly life because of his “creative courage.” The carpenter of Nazareth “was able to turn a problem into a possibility by trusting always in divine providence.”

Likewise, when God seems not to help us – and for some that is how it seems like the pandemic death toll rises – this does not mean that we have been abandoned, says Francis, “but instead are being trusted to plan, to be creative, and to find solutions ourselves” like Joseph did.

During the first days of this new year, I’ve turned to another figure as well – that of Mary, under the title of Our Lady of Hope. January 17, 2021 marks the 150th anniversary of a Marian apparition in the small French village of Pontmain.

For over 30 years the pastor of this village of 500 inhabitants taught his parishioners to pray to Mary with confidence and perseverance under the title of Our Lady of Hope in all their needs.

But in January 1871, France was losing miserably in a war they had started against the German states. With the Prussian army within 50 miles of Pontmain, the villagers feared annihilation. As they gathered with their pastor for Sunday afternoon devotions on Jan. 15, they voiced their desperation: “What is the use of praying? God no longer hears our prayers!”

Yet just two days later Our Lady appeared over Pontmain, writing a message in capital letters across a starry night sky: “But pray my children. God will answer your prayers very soon.”

That same night the Prussian forces turned back, reporting an invisible Madonna in the sky barring their advance. All of Brittany was spared; an armistice was signed just 11 days later and all 38 of the young men from Pontmain who had been conscripted into the army returned home unscathed.

The apparition of Pontmain, though little known in the United States, teaches us to pray with confidence and perseverance because Jesus and His Mother really do hear our prayers, even when we feel they are not listening.

This winter let’s pray to Our Lady of Hope with confidence and perseverance, asking her to deliver us from this 21st-century plague. And let’s look to St. Joseph as an example of creative courage and effective action, so that we will envision and employ every means within our reach to keep ourselves and those who depend on us safe and healthy in 2021.