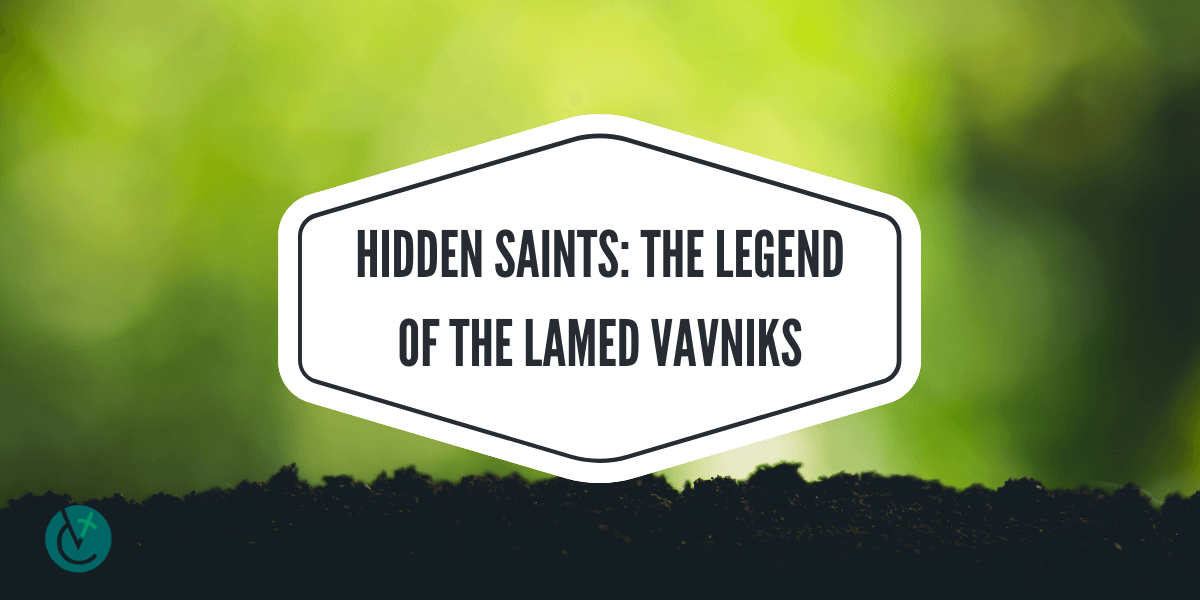 Hidden saints: The legend of the lamed vavniks

One of the things I love about my home is the small library created for me by my husband, a gifted carpenter. Whitewashed shelves and crown molding wrap around three walls, giving me a lovely place to house my oversized and often-unwieldy collection of books.

Over the years, I’ve developed a habit of writing notes, poems and prayers and saving them in one of my favorite books. Recently, as I was reorganizing, a small piece of paper fell from between the pages of a long-untouched volume.

Unfolding the paper, I saw a circle within which were two letters of the Hebrew alphabet – lamed and vav. I have no recollection of why I wrote them, unless it was one of my rushed attempts to simply practice the alphabet when reading Hebrew was a requirement of my graduate degree.

Curious, I decided to Google the letters to find out what they meant and soon discovered the Jewish “legend of the lamed vavniks.”

The heart of this legend is meaningful for people of all faiths and is reflective of the lives of so many saints — men and women — who lived with a knowledge of God’s presence, humble servants of all God’s children with a desire to be God’s love for a wounded world and wounded people.

To understand the legend one has to first know a bit about Hebrew numerology, where each letter has a numerical value – lamed is 30 and vav is six. Together, the two letters equal 36 – the number, so the legend goes, of the righteous in every generation whose virtue keeps the world from destruction.

If the concept sounds familiar it’s because the legend is based, in part, on the story of Abraham who beseeched God to save Sodom and Gomorrah for the sake of a small group of righteous people. God replied to Abraham, “I will spare the whole place for their sake.”

So, what is the work of the lamed vavniks? They are fonts of lovingkindness, pouring compassion on the world and using the gifts and talents they were given by God to raise up those around them.

“Without their acts of lovingkindness,” writes Rabbi Rami Shapiro, “life on this planet would implode under the weight of human selfishness, anger, ignorance and greed.”

In his book, “The Sacred Art of Lovingkindness,” Rabbi Shapiro explains that cultivating the sacred art of lovingkindness is enrolling one’s self in the ranks of the lamed vavniks.

Rabbi Shapiro calls us to a similar mission and offers some sage advice. He writes, “Once you realize that the whole world depends on you for its very survival, you will not lack in opportunities to serve. Just remember that you are a hidden saint. While it is fine to invite others to join with you, make sure you don’t advertise your own saintliness. While being a lamed-vavnik may be good for your soul, it doesn’t belong on a resume.”

For Catholics, Pope Francis reminds us that sainthood is a vocation for which we should all strive. In his Apostolic Exhortation, “Gaudete et Exsultate: On the Call to Holiness in Today’s World,” the Holy Father writes of the saints “next door,” those members of our families and communities whose often- unrecognized holiness plays a part in our salvation as members of the People of God.

He writes, “Let us be spurred on by the signs of holiness that the Lord shows us through the humblest members of that people which shares also in Christ’s prophetic office, spreading abroad a living witness to him, especially by means of a life of faith and charity.”

Pope Francis reminds us that real history is made up by so many of them, quoting St. Teresa Benedicta of the Cross: “The greatest figures of prophecy and sanctity step forth out of the darkest night. But for the most part, the formative stream of the mystical life remains invisible. Certainly the most decisive turning points in world history are substantially co-determined by souls whom no history book ever mentions. And we will only find out about those souls to whom we owe the decisive turning points in our personal lives on the day when all that is hidden is revealed.”