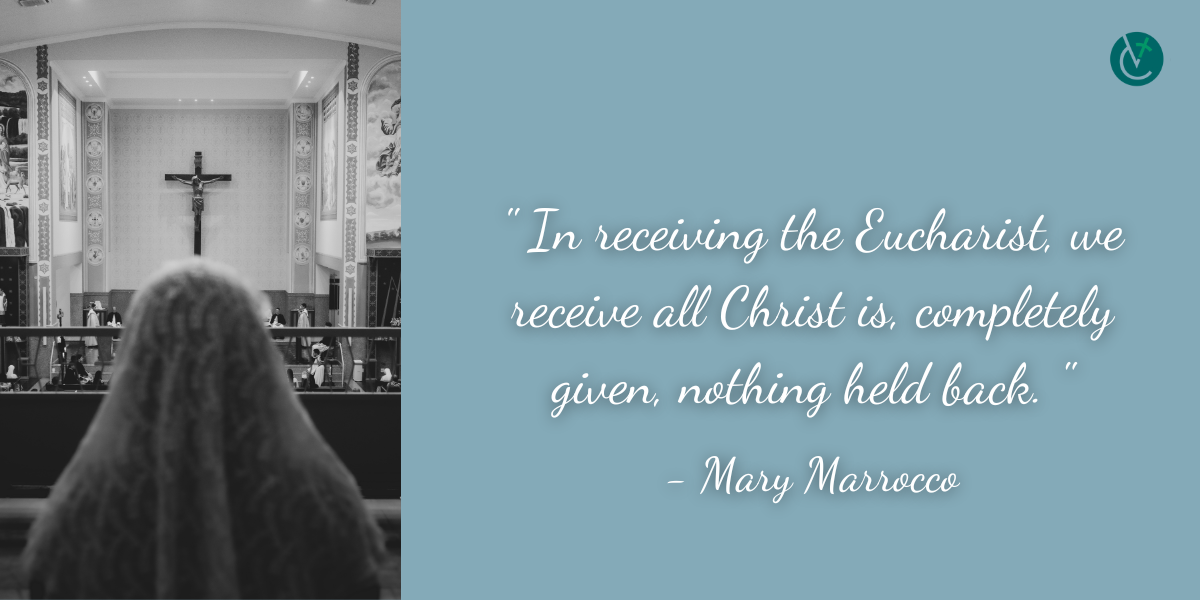 In the face of division, turn to the Eucharist

It can be difficult these days not to become crabby, bitter and divisive. Every day, we receive so much that frightens or angers us and seems to threaten our very being.

Recently, I encountered a woman named Joanna. She was wondering what to do about a spate of messages that were written and posted about her in big bold letters, calling her mean and nasty.

Joanna, seeing such messages with her name on them, could have become what she received: nasty, mean and cowardly. But how could she avoid passing it on to others?

St. Augustine of Hippo observed that humans become what we receive. He had great respect for the power of habit to influence and change us, for the worse or for the better. He saw the goodness and beauty at the core of every person and the ugliness we are capable of and are frequently marred by.

The fundamental antidote, for him, was always the same: Receive the sacraments. Receive the Eucharist. Become what you receive. He saw that communion is not something we do, make or are capable of; it’s something we receive and become. And that “something” is godly.

So what changes when we receive communion? We do. We are changed in the twinkling of an eye (1 Cor 15:52) and we are changed little by little, not into something else, but to our true selves. “Be what you see; receive what you are” (Sermon 272 of St. Augustine).

This is communion. This is what we are made for: communion with God and one another. Nevertheless, we have trouble getting there — even when we try — and more trouble still when we stop trying or head the other way.

This is our real work: communion. The secret is, it is not a work but a gift. We can work against it, of course, like the writer of the false messages about Joanna. We will not be able to destroy it, but we can harm ourselves.

Fortunately, even when we inflict self-harm, God remains imbued in it all, urging us from within. As Augustine observed, we have hope because God is not changeable, but we are. “We will all be changed” (1 Cor 15:51).

If Eve, when offered the fruit, had dug deep and found her anger toward the serpent for urging it on her, she might have had the energy to say, “No thank you,” or “Get behind me, adversary (Satan).” Perhaps she and Adam would have gotten along better and the whole human race after them. If we are able to focus our anger on the real adversary, we might learn to find one another instead of harm each other.

But how? Another secret: We can’t, but Christ can. And because Christ can, therefore we can. In receiving the Eucharist, we receive all Christ is, completely given, nothing held back. We become what we long to be, though we might be only dimly aware of our longing.

Joanna too had a secret, which I happened to know by fortuitous accident. Just the week before the mean messages were posted, I heard a homily reminding us how good it is to be together at Eucharist, taking in the beauty and joy and gift of God. But that means we don’t go home and leave it all “at church;” we must bring it with us, into the world. That is “Mass,” being “sent.”

Hearing this homily, I recalled that as I’d arrived at church that morning, Joanna was arriving too. She stopped and told me her concern about a man down the street who asked her for food. “I see him often, but he doesn’t usually ask for breakfast on Sunday morning,” she explained.

She immediately went, got him breakfast, and came back into church just as liturgy was beginning. Yes, the same Joanna who later had the nasty messages posted about her.

Who are we becoming? Let us receive the gift of God himself. Let us become what we receive.