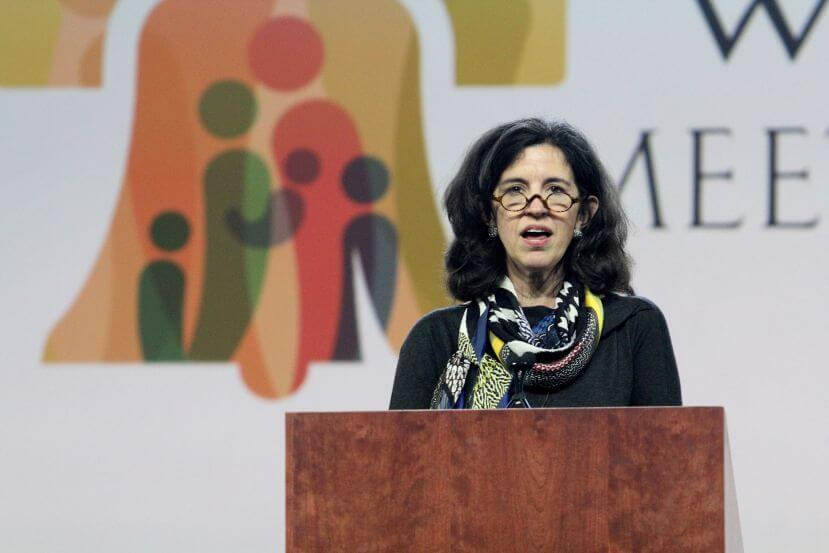 Helen Alvare speaks Sept. 24 at the World Meeting of Families in Philadelphia. Alvare, a law professor at George Mason University in Arlington, Va., who spoke on the topic "Creating the Future: the Fertility of Christian Love," is an expert on marriage and life issues.

A little-known fact about the women’s movement is that it did not begin with the pro-abortion agenda that characterizes it today. Suffragettes of the early 20th century were concerned primarily with obtaining the right to vote, not the right to abort their children.

According to Marjorie Dannenfelser, president of the pro-life Susan B. Anthony List, “Early leaders of the women’s suffrage movement in the U.S. believed that the rights of mother and child are inextricably linked and that the right to life and the right to vote are rooted in the inherent dignity of each human person.”

Nearly 100 years after women won the right to vote, the movement has transformed from its early focus to one which effectively places women in competition with their children and at odds with their fertility. Modern feminist ideology promotes the dangerous notion that women “need” abortion and contraception as solutions to such problems as poverty, hunger, domestic abuse and single parenthood. Pro-life advocates who work to prioritize the protection of the unborn are sometimes accused of ignoring the social and economic causes that lead women to seek abortions.

In fact, to be “pro-life” has always been to be pro- “all life.” Whereas there are some such as Charles Camosy (“Beyond the Abortion Wars”) who describe the unborn as “innocent aggressors,” whose right to life is subordinate to that of their mothers, Catholic moral teaching views the lives of mothers and their unborn children of equal dignity and worth and supports a “both-and” approach to solving the problems that lead to abortion. That is, we work both to protect the unborn and to solve economic and social problems that threaten families.

A nationwide movement known as Women Speak for Themselves has emerged whose mission is to challenge the prevailing notion that women “need” access to abortion and contraception, focusing specifically on “how women are disadvantaged respecting dating and marriage, particularly because of contraception and abortion, and about how to reconnect sex with marriage and children for the good of all people.”

Inspired by Women Speak for Themselves founder Helen Alvare, who is a nationally known speaker, writer and attorney Joanna Bisceglio of Waterbury was moved to organize a chapter in Vermont. “As a Vermont professional, mother, wife, athlete and a Catholic, I am amazed at the abuse women often put themselves through by not standing up for ourselves and each other in this throwaway culture that devalues women constantly,” Bisceglio explained.  “We women often don’t support each other enough and stand up for how we were made to be treated, in God’s divine image.”

She said her goal is to bring women together around topics of mutual concern with the hope that even on those issues about which there is disagreement, they can work toward greater understanding and respect. “I truly believe that what unites us is greater than that which divides us,” she said.

The emergence of groups like Women Speak for Themselves is evidence that the false dichotomy underpinning the modern women’s movement is increasingly giving way to a more authentic “both-and” approach to women’s issues that recognizes pro-life and pro-woman goals as mutually supportive, not mutually exclusive. As Catholics, we are called to throw the full weight of our creative and moral energy behind policies and reforms that uphold the dignity of all, born and unborn.

— Carrie Handy is the respect life coordinator for the Diocese of Burlington.