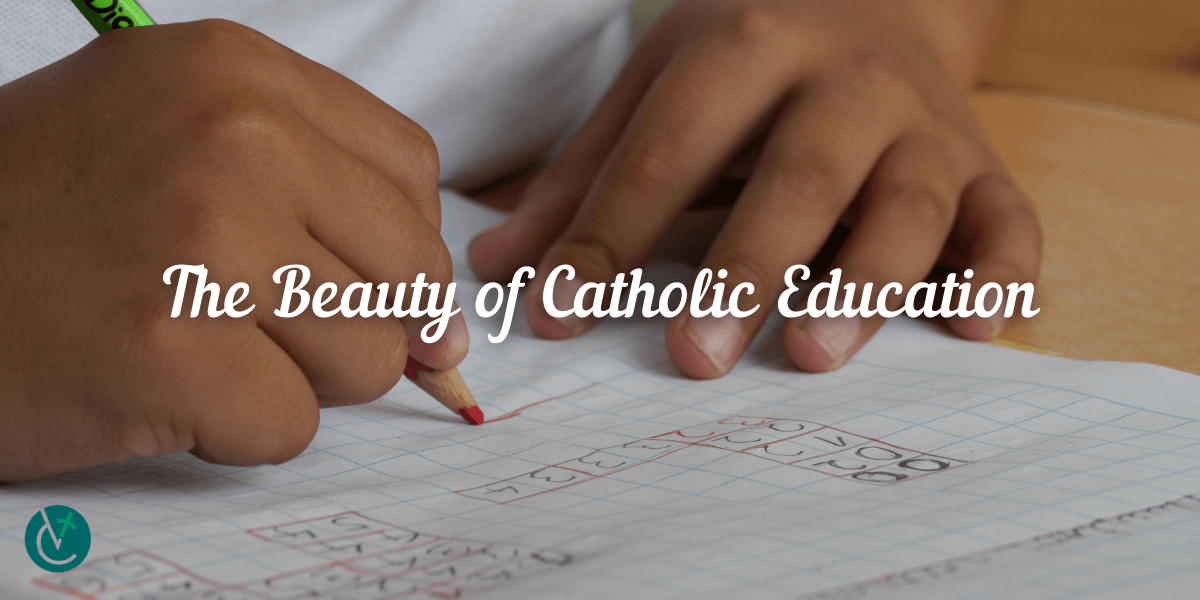 The beauty of Catholic education

When I first got to a Catholic school, I realized that my education was in some sense “empty,” that something important had been missing. For the most part, the public schools I attended did a good job teaching me skills —reading, writing and arithmetic — and about the world. Yet it lacked the power to connect me deeply to that world and myself. Who was I? How do I become excellent? And what does it all mean? Those answers were hidden by a veil that public education by definition maintained.

It took me a little longer to see that there was a liability in my church experience as well. Without a doubt, my parish connected me to that which is most important in life: truth, beauty and goodness. Yet it was so other-worldly that those ideals couldn’t really be found or exercised in the world. So, while it lifted the veil to see behind it, the veil remained. If my schools exiled God from the world, it sometimes felt that my church exiled the world from God.

Catholic education began to break down that veil. Not that Mount St. Mary’s University had all the answers — no institution or perspective does. Rather, the Mount provided clear signposts that guided study of the world and connected you to all that is: the human person, the common good and the New Heaven and New Earth. Faith became not a place to escape to but a key that both transforms you and unlocks the world around you, allowing you to see that the veil is fundamentally an illusion.

There are lots of different ways to think about why this is the case in Catholic education, but to me the best way is the witness of St. Thomas Aquinas (1225-1274). Up until then, the old Manichaein tendency — to see the material world as inherently evil and something to be escaped — waxed and waned through the centuries and kept us on either side of the “empty” coin. If something is evil, why try to understand it and work within it? Or if you can’t see the material world as evil, you may find yourself drifting out of a community that says it is.

When St. Thomas’ discovered Aristotle, he found a way to talk about the world in the right way: not eternal or god-like, not depraved, but created good that we seek to understand in the light of Christ. In the time of St. Thomas — and even today — this move was something akin to the elusive “theory of everything” that quantum physicists search for these days. His insight was not, however, an innovation, but a return to the logic of the Incarnation. In the words of G.K. Chesterton, St. Thomas “reaffirmed the Incarnation, by bringing God back to Earth.”

The enchanted world that St. Thomas describes works together like a sunset. The sun illuminates the clouds and makes the sunset possible. No one laments the clouds as something to be escaped as they magnify the glory of the sun. The final point is the easiest to miss: There is no separation between you and the sunset, for the same light that fires the cloud reaches you and allows you to see. The sunset, like Catholic education should be, is one seamless event unified by light — beauty.

We have to be secure enough to acknowledge that Catholic education, like any other kind of education, can sometimes fall short of its goals. And in the last 50 years, we have lost a lot of Catholic schools and struggle to re-invent those that remain.

A lot of challenges remain, but renewal is happening. More and more schools are anchoring themselves in the mystery of the Incarnation and the power of St. Thomas’ enchanted world, deeply connecting our children to themselves, God and all that is around them. When it’s done correctly, there’s beauty in Catholic education.

And it’s still there, waiting to be found.

—Damian Costello is a member of St. Augustine Parish in Montpelier and the author of “Black Elk: Colonialism and Lakota Catholicism.”

—Originally publishes in the Fall 2020 issue of Vermont Catholic magazine.