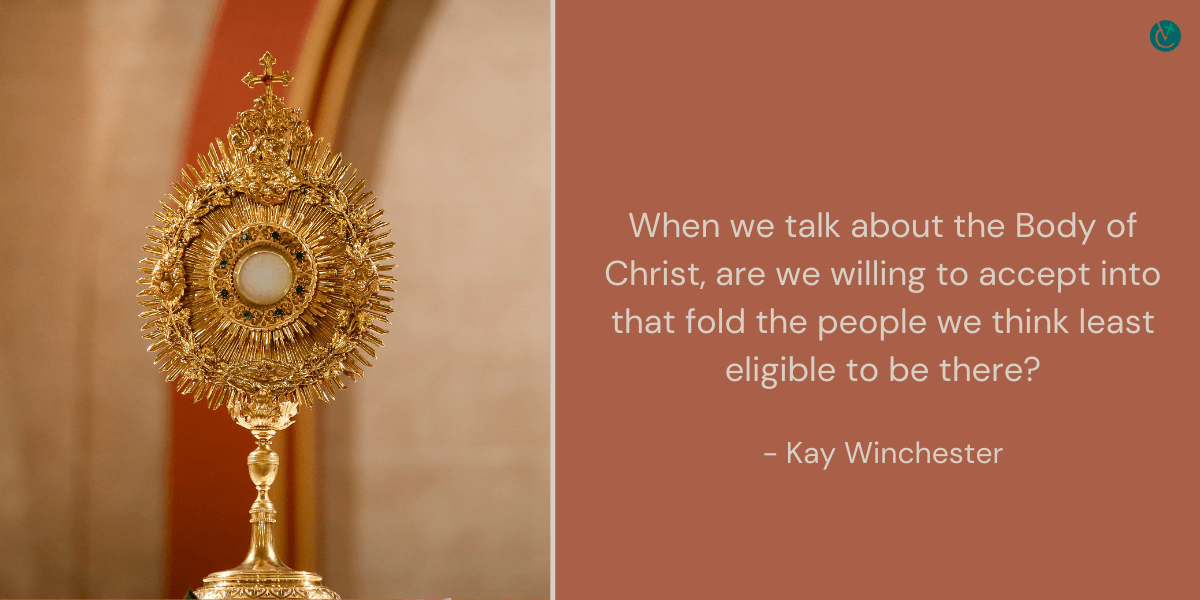 The Body of Christ

Several years ago, I attended a retreat for religious educators that attracted participants from many different states.  It was held over a 3-day period and culminated with a Mass celebrated just before we all left to go to our respective homes.

I got to the chapel early that morning and, because there was no one else in the building when I arrived, I decided to sit in the front pew.  Given the crowd that would be there, I wanted to have the best vantage point to see and hear everything.

That plan worked out quite nicely, but it wasn’t until the time came for communion that I fully understood the message I would carry away that day.  As each participant came forward, I could hear, very clearly and distinctly, the priest’s words, “The Body of Christ,” pronounced over and over again.

It was at about the tenth person that something clicked with me in a way that it never had before – yes, we were all receiving the Body of Christ, but, more than that, we all were the Body of Christ.  With each “Amen” that reality became clearer and clearer.  All of us — men and women, young and old, from all different places — were united in something much larger than each of us individually.  We were – and are — Christ’s body in the world, and that is no small thing.

That was the mountaintop moment.  However, like Peter, James and John, no one can stay on the mountain forever — at least not on this side of heaven — and it’s what we do in the valley that really counts.

In his book, “The Screwtape Letters,” C.S. Lewis speaks to this precise issue.  Given the premise of the book – letters from a senior tempter (re: devil) to a junior one — Lewis approaches things, not from the top of the mountain, but from the lowest valley imaginable. The “patient,” as the senior tempter puts it, has just discovered Christianity and it is up to the junior tempter to dissuade him from any further incursions into the faith; he points out that the concrete nature of those fellow Christians provides the most useful fodder for doing so. “When he gets to his pew and looks around him,” the senior tempter advises, “he sees just that selection of his neighbors whom he has hitherto avoided. Lean pretty heavily on those neighbors. Make his mind flit to and fro between an expression like ‘the body of Christ’ and the actual faces in the pew.”

When Jesus answered the lawyer’s question about “Who is my neighbor?” He made a point of choosing a Samaritan, someone hated and reviled by the observant Jews of His time.  When we talk about the Body of Christ, are we willing to accept into that fold the people we think least eligible to be there?  Is our table long and our tent big?  Can we bring what we saw on the mountain into the reality of all our valleys?

Throughout his life, Justin Hollingshead had momentary encounters with Catholicism that led him to [...]