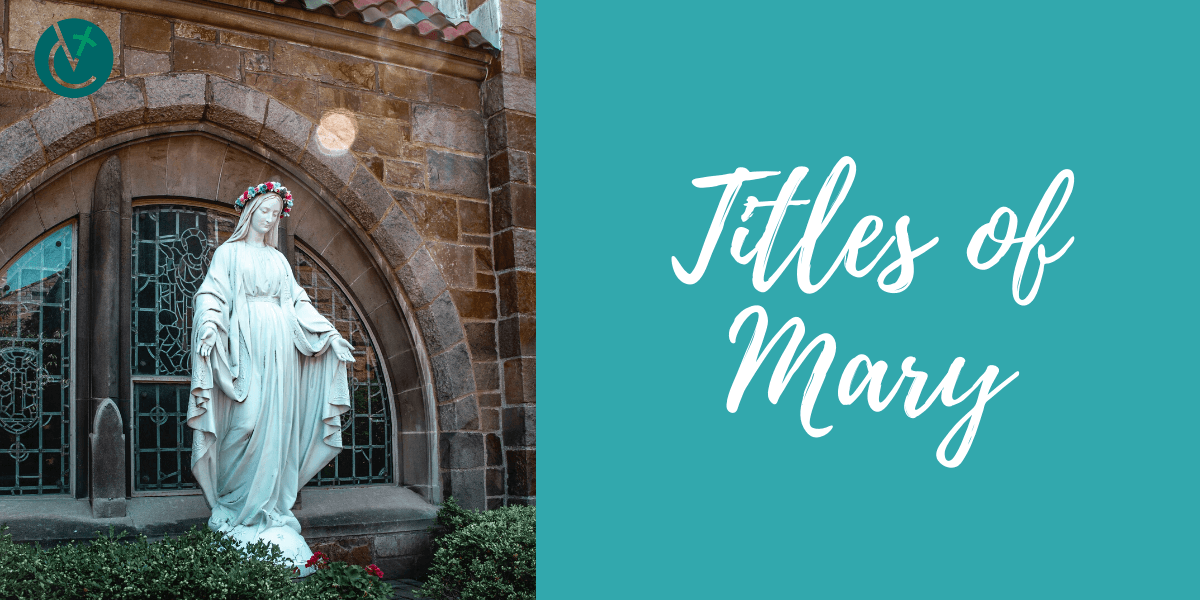 No saint has as many titles as Mary. That is perhaps because, unlike any other saint, she is so very many things to so very many people. Each name we know her by, whether it is related to her role in salvation history, such as Mother of God, or a place in which she has appeared, such as Our Lady of Lourdes, or a way in which she has been present to us, such as Our Lady, Refuge of Sinners, she shines like a jewel possessed of endless facets.

The Church recognizes six “formal” titles for her, which corresponds to Church teaching and dogmas concerning her: Blessed Virgin Mary, Mother of God, Our Lady, Queen of Heaven, Immaculate Conception and Assumption. Three of these are namesakes of parishes in the Diocese of Burlington, but there are others which celebrate a different aspect of who she is. Let’s take a look at some of them.

Our Lady of Perpetual Help, also known as Our Lady of Perpetual Succor, is based on an icon, painted on wood, that depicts the Mother of God holding the Divine Child while the Archangels Michael and Gabriel are on either side of them, presenting Jesus with the instruments of His Passion. Thought to have been painted in the 13th century, it was brought to Rome in the 15th. Eventually placed under the care of the Redemptorists in 1866, many graces and miracles are credited to devotion to Our Lady under this title. Interestingly, in this icon Mary is not gazing at Jesus, but at us, as if to offer

comfort and solace in our sufferings. The feast of Our Lady of Perpetual Help is June 27.

Our Lady of Mount Carmel is related to both a place and a religious order. Since the 12th century, hermits on Mount Carmel, located in northern Israel, have had a chapel dedicated to her, and they eventually became known as the Brothers of Our Lady of Mount Carmel. In 1726, devotion to Our Lady under this title became a celebration in the universal Church. Carmelite saints have had a special devotion to her: Saint Teresa of Avila, St. John of the Cross and St. Theresa of the Child Jesus. The scapular, still worn by many, was said to have been given to St. Simon Stock as a sign of devotion to Mary under this title and a reminder to all to persevere in both prayer and penance. This feast day is celebrated on July 16.

The Assumption of Mary, as a dogma of the Church, is relatively recent. On Nov. 1, 1950, Pope Pius XII solemnized what had been a common belief in the Catholic Church since at least the sixth century. “We pronounce, declare and define it to be a divinely revealed dogma that the immaculate Mother of God, the ever-Virgin Mary, having completed the course of her earthly life, was assumed body and soul to heavenly glory,” he said.  A holy day of obligation, the Assumption, is celebrated on Aug. 15.

The Queenship of Mary, which is celebrated on Aug. 22, also is a fairly recent commemoration on the Church calendar. Pope Pius XII established this feast in 1954, placing it on the octave day of the Assumption; we are perhaps reminded of it most often when we pray the prayer “Hail Holy Queen.”  The Coronation of Mary as Queen of Heaven is also the fifth Glorious Mystery of the rosary.

Our Lady of Grace does not have an “official” feast day on the Church calendar, but it is often commemorated on July 2. This title can be understood in a couple of ways; as Jesus’ mother, it was Mary who brought Divine Grace into the world. It is also through her powerful intercession that we, too, are granted a multitude of graces. Thus, Mary appears as a loving mother who obtains all that people need for eternal salvation.

Our Lady Queen of Peace, who is also known as Mother of Peace and Our Lady of Peace, actually has two feast days. The universal Church celebrates her on July 9, but in Hawaii and certain other states, she is commemorated on Jan. 24 and is often represented holding a dove and an olive branch. In 1917, during World War I, Pope Benedict XV asked people to pray to Mary under this title for an end to the devastation that was occurring on battlefields throughout the world.

The Immaculate Heart of Mary, whose feast is celebrated on Aug. 22, is closely related to the Sacred Heart. In honoring Jesus’ Sacred Heart, we acknowledge His incredible and boundless love for all people, a love which is often ignored or spurned. The heart of Mary, however, is turned instead toward her Son, and is a sign of her love and devotion to God. St. John Eudes (whose feast day is Aug. 19) is particularly known for his devotion to the Sacred Hearts of both Jesus and Mary.

Our Lady of the Angels comes to us from Costa Rica and began with the discovery of a statue only three inches high. A mestizo woman came upon this tiny depiction of Mary along a footpath on the Feast of the Holy Angels, Aug. 2, 1635. She took the image home, but it soon disappeared only to reappear in the place where she originally found it.  When the same thing happened five more times, it was determined that Our Lady wanted a shrine built on that spot. In 1935 Pope Pius XI declared the shrine of the Queen of Angels a basilica, and miracles have occurred there ever since.

We have many titles through which we love and honor Mary. Several years ago, however, I heard a homily in which the priest spoke of the greatest title of all, bestowed on her by her beloved Son. It encompasses in one word everything we ever need to know about her.

That title is “Mom.”

—Originally published in the Summer 2020 issue of Vermont Catholic magazine