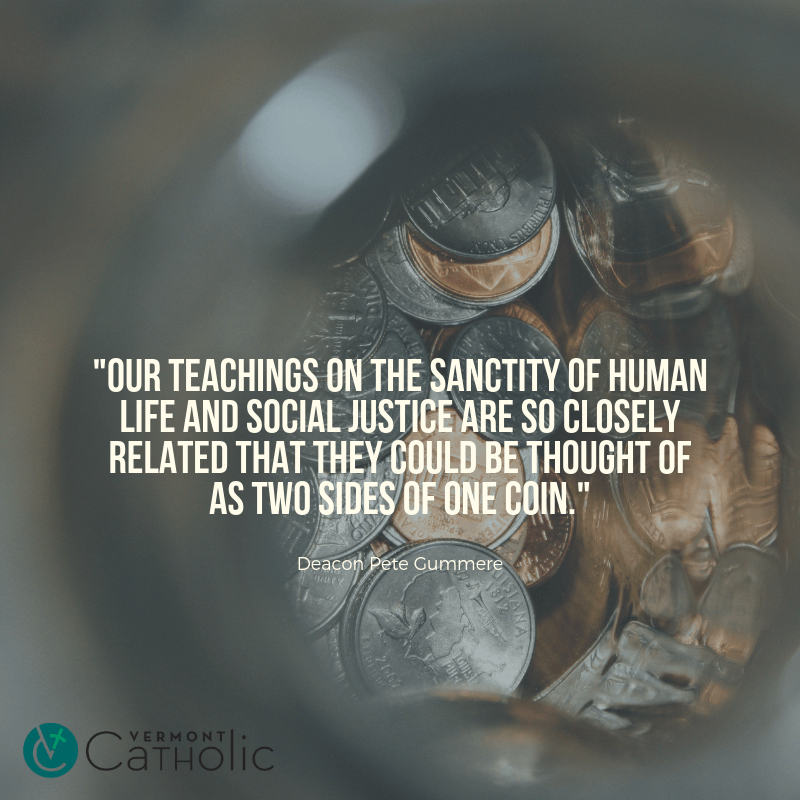 Two sides of one coin

A few years ago, I bumped into an old friend. He is one of the many Catholics who have left the Church, disagreeing with one or more teachings. One of his issues is the Catholic Church’s stance on abortion. “You know, if the Church proclaimed its own teachings on social justice with the same vigor that it teaches on abortion, there would be more Catholics. They preach on abortion about 10 times more than on social justice,” he asserted.

His speculation was not consistent with my own experience. Our teachings on the sanctity of human life and social justice are so closely related that they could be thought of as two sides of one coin, both revolving around the inherent dignity of the human person.

When the Church teaches on a matter of social justice, the starting point is the dignity of the human person, created in the image and likeness of God. Hence, all humans are equal in their inherent dignity. This is based in the Second Commandment to love our neighbor as we love ourselves.

Consequently, it is wrong to demean such an image and likeness of God – our neighbor. Acts of violence against others are likewise wrong, and except for legitimate acts of defense, are forbidden by the Fifth Commandment.

Aside from murder and overt violence, the most egregious forms of abuse of another are slavery and physical and sexual violence. Each represents extreme degradation of another human being. Likewise, emotional abuse constitutes serious injury to another’s wellbeing.

Acts of economic exploitation such as paying wages that provide less-than-reasonable support for the worker along with discrimination in employment decisions, oppressive working conditions and other acts of discrimination in economic or social matters likewise demean a human person and violate the laws of justice.

It is a serious offense against God to mistreat any part of creation with contempt or lack of respect. Environ-mental pollution by chemicals resulting from inadequate controls can have serious health consequences. Frequently, such pollution impacts the poor to a disproportionate degree. One need not look beyond current problems in Lake Champlain or perfluooctanoic acid (PFOA) contamination of the groundwater in the North Bennington area to have some sense of the harm that can be done. Such pollution disrupts the balance of the world created by God.

Tolerating unsafe working conditions results in workers being harmed. Outrageous medical practices such as occurred in the Vermont Eugenics Project or the notorious Tuskegee Project reveal a calloused attitude toward other human beings. Such practices violate the precepts of justice and human dignity.

The common theme in these situations involves a bigger, stronger, physically, socially or economically more powerful person exercising unjust and unfettered control over another, thereby inflicting suffering and violating the precepts of justice. The same dynamics of a bigger, stronger, more powerful person causing harm to others also surface in such areas as embryonic and fetal experimentation and illicit repro-ductive technologies. Many Catholic advocates for social justice are motivated by the mandate in Matthew’s Gospel: “Whatever you do for the least of these my brothers and sisters, you do unto me” (Mt 25: 40). The unborn, the terminally ill and the elderly are clearly among the most vulnerable and the “least of my brothers and sisters.”

Absolute respect for all human life and treating all persons with profound dignity are two sides of the same coin: Respecting human dignity in all its particulars!

— Deacon Pete Gummere is a bioethicist and adjunct faculty at Pontifical College Josephinum and Theology Instructor at St. Therese Digital Academy. He serves at Corpus Christi Parish in the St. Johnsbury area.