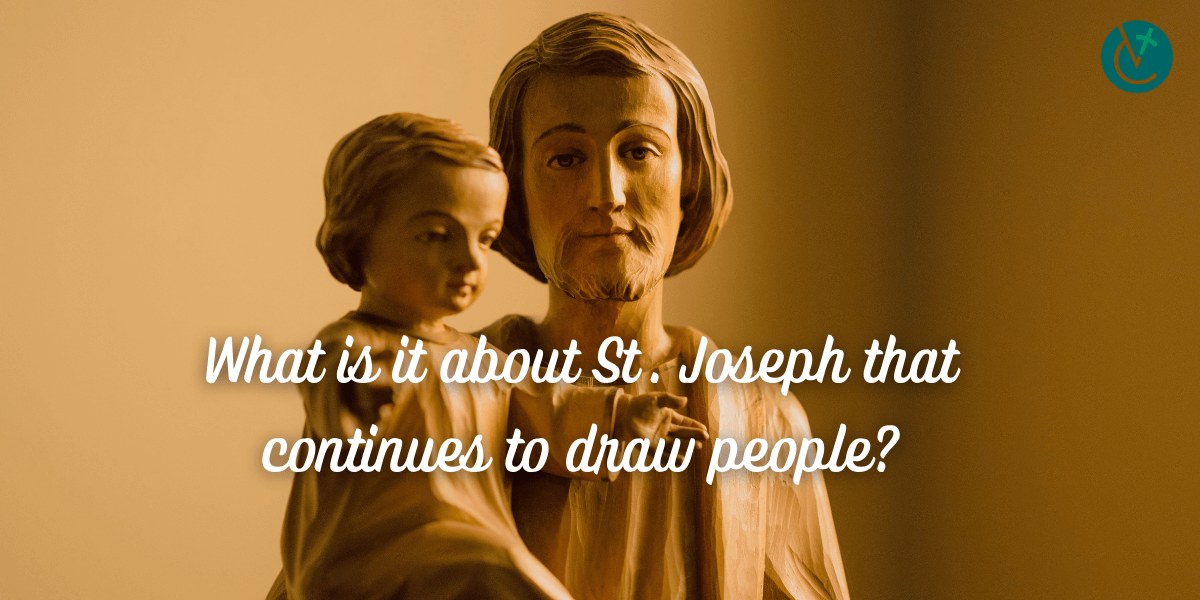 What is it about St. Joseph that continues to draw people?

John (names changed for privacy) called me the other day asking for a favor.  A colleague of his, Lisa, had reached out to him after receiving a dire medical diagnosis.  John does not hide his Catholic faith even though he struggles to follow it as well as he’d like.  When he met with Lisa, she was drawn to his St. Joseph medal that he proudly keeps with him.  Seeing her need and her interest, he gave it to her.  Lisa was not raised with any religion, and during the conversation she asked about being baptized.  John was calling me to set up a time he could bring her to me to talk and was hopeful that I would bless a new St. Joseph medal for him.

What is it about St. Joseph that continues to draw people?  Nary a word of his is recorded in Scripture, and yet he was an essential part of the story of salvation.  We do not know when or how he died, and yet he continues to be present to the world.  We can hear St. Andre Bessette’s continuous mantra to all who shared their troubles with him, “Go to Joseph.”

In times of trial and struggle we inevitably look for models.  We look for similar situations to provide context for what we are enduring.  We seek out examples of those who not only endured challenges but overcame them.  We look for signs of hope.  In this we can go to Joseph.  And that’s what Pope Francis invites us to do as he offers us the unexpected gift of a year dedicated to St. Joseph, in which he hopes “to increase our love for this great saint … implore his intercession and to imitate his virtues and his zeal.”

In light of this, I’d like to offer two traits of St. Joseph, particularly relevant for our time, which we can seek to emulate: his steadiness and what Pope Francis calls his “creative courage.”

Included in the Litany of St. Joseph is the title “Pillar of Families.”  Joseph was a pillar of steadiness for the Holy Family.  There was certainly much to be unsettled about in his time and in their life.  And yet he was a steady pillar.

I don’t expect St. Joseph was consumed with the latest machinations of Caesar or the Roman Senate.  I don’t expect he daily (or even hour by hour) checked for updates on Herod’s health — although he certainly would have had motivation to do so living as a refugee in Egypt!  I don’t imagine Joseph eagerly gobbled up the latest pronouncements from the Pharisees or engaged in many conversations as to who would be appointed the next chief rabbi at the temple.  St. Joseph, as we hear in the Gospels, simply did what he was supposed to do: serve the Lord and take care of Mary and Jesus.

Joseph certainly would have had much to be concerned about.  Fleeing to a foreign country; securing work, providing food and shelter for his young family; not to mention the mystery of what was to become of his son; the anxieties that every parent faces.  And yet, as Pope Francis notes of Joseph, “In him, we never see frustration but only trust.” He knew the Lord was in control. He knew that he simply had to fulfill the role entrusted to him.  Joseph trusted.  And because he trusted, there would have been a steadiness about him.  He would not have been blown like swaying reeds but steadily rooted on the rock of God.  And no doubt others would have seen that in Joseph.  And among those who saw that would certainly have been the one he raised, Jesus.

In our times of uncertainty, when so much information is at our disposal that further feeds that uncertainty, we can look to Joseph’s example and in imitation of him plant ourselves firmly on the rock of trusting in the Lord.

In Pope Francis’ document “Patris Corde” announcing the Year of St. Joseph, he referred to the “creative courage” of Joseph.  He notes that “Joseph is not passively resigned, but courageously and firmly proactive” and that “God acted by trusting in Joseph’s creative courage.” We read in the Gospels how often Joseph “did what was commanded of him,” but rarely did those directives come with a detailed guide!  Joseph wasn’t given an itinerary for when they fled to Egypt.  He wasn’t told beforehand where to find work.  He wasn’t told how long they would be there.  He wasn’t given instructions for how to raise the Son of God.  And he wasn’t forewarned that Jesus would go missing for three days at age 12.  And yet, with creativity, courage and ultimately faith, Joseph did what was asked of him.

How does this fit with evangelization?  When everyone is losing their heads, who do people turn too?  The one who is steady.  The one who is calm and collected.  When there seems to be no way forward, who stands out?  The one who is willing to proactively and creatively work to solve the problem.  St. Joseph was both of those things.  And what was the result?  In responding to what the Lord asked of Him, he took care of his family and no doubt pointed people to Christ.  In our examples of steady faithfulness to the Lord — pillars in our own families and our own opportunities to display “creative courage” no matter what the difficulty — we can model an example of faith to those around us.

—Deacon Phil Lawson is the executive director of evangelization, catechesis, divine worship, marriage and family, and respect life for the Diocese of Burlington.  He can be reached at plawson@vermontcatholic.org.