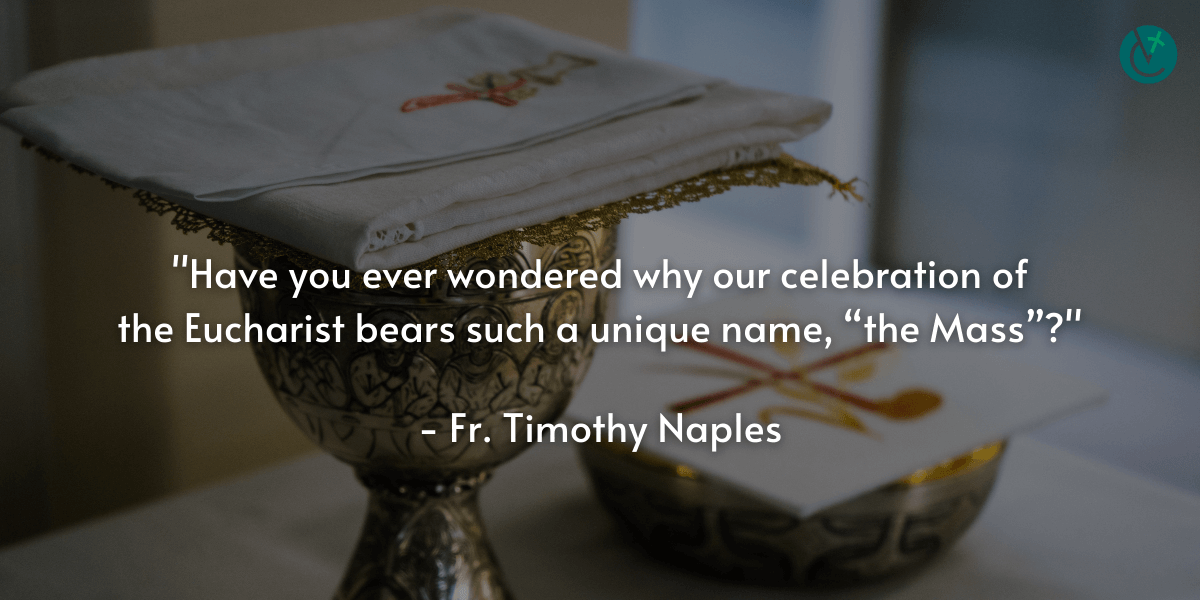 Have you ever wondered why our celebration of the Eucharist bears such a unique name, “the Mass”? The Catechism of the Catholic Curch reminds us “Mass… concludes with the sending forth (missio) of the faithful.” At the end of “Mass,” we are told to go forth glorifying God, doing His will.

The catechism alludes to the Latin dismissal, “Ite missa est.” “Ite” means go forth. “Missa” is from the Latin word “mittere,” a verb that changes in various contexts, for example when it gave rise to our English word “mission.” “Missio” means sending. Does Mass mean the same? Does it mean our “co-mission-ing”?

It is true we are commissioned at Mass. We could here call to mind the “new evangelization” as preached by St. John Paul II. We might think of Pope Francis’s call to be not only disciples but “missionary” disciples. Yet, there is a meaning that goes much deeper for the term “Mass.”

In my seminary introductory classes, we were presented directly with a small, unsolved puzzle. It was shown to us that “ite, missa est” cannot be translated as “go now, you all are sent.” It does not contain the proper Latin form of “mittere.”

Our liturgy instructor pointed out “missa est” translates “IT has been sent,” yet he did not know the word which, historically, would be the subject of the sending. Is the word “sacrifice”? We understand the Eucharist to be a true sacrifice of praise, “a holy and living sacrifice” (Eucharistic Prayer III). But the verb form of “missa est” did not match “sacrificium” (i.e. sacrifice). “Missa est” must have been associated historically with another word.

Some years ago I stumbled upon a clear answer, not surprisingly through St. Thomas Aquinas. In his great work, the “Summa Theologica,” he remarked, as in passing, “from this [previous consideration] the Mass derives its name.” Voila! What consideration was it? St. Thomas then reiterated “…because Christ is the victim sent [missa] to us” (Summa, III, 84, 4, ad9). The word here was “hostia.” The answer to the puzzle seemed clearly to be solved by the phrase “hostia missa est” (literally, “the victim has been sent”).

In the 12th century the name “Mass” was already in use, and it referred theologically to Jesus as the “victim” of the sacrifice. Our Eucharistic prayers still refer to Jesus, hidden under the appearances of bread and wine, as a “sacrificial Victim.” Yes, Christ is the Victim who died for our salvation. But first, as St. Thomas reminds us, “Christ is the victim sent to us” in the Incarnation.

I like the way that Eucharistic Prayer IV alludes to this, although it does not use the word “victim.” Eucharistic Prayer IV recalls the sacrifice of Abraham, saying “Look, O Lord [Heavenly Father], upon the sacrifice which you yourself have provided for your Church.” The biblical allusion is clear. The first time that “God provided” the victim for a sacrifice was on Mount Moriah (See Genesis 22:1-14). Abraham, thinking he must sacrifice his son Isaac, yet wishing to hide the fact from his son, said cryptically and prophetically, “God Himself will provide the lamb for the sacrifice.”

In the subsequent episode for Abraham, God provided a ram to be the victim in place of Isaac. In the rest of the Bible, we know God Himself provided the victim, when Christ came as “the Lamb of God who takes away the sins of the world.” Abraham’s words were a promise of the Incarnation. Jesus is the Lamb of God for us. He is the victim in the perfect sacrifice, by voluntarily going to His own death, brining about our salvation. “Hostia Missa Est!”

Christ now offers Himself for us each day in the miracle of transubstantiation of “the Mass.” On the altar He is a living victim, never dying again! In the Eucharist, Christ takes all our repentance, our adoration, our thanks and our petitions, bringing them to the Father in heaven. Then He fills us with “every grace and heavenly blessing” when we receive him worthily (Eucharistic Prayer I). Then He commissions us with His graces and with the gifts of the Holy Spirit to be “the salt of the Earth” and “the light of the world.”

At the end of each Mass we might say “our living Victim, sent for us, has sent our offering to the Father; go now! You all are sent.