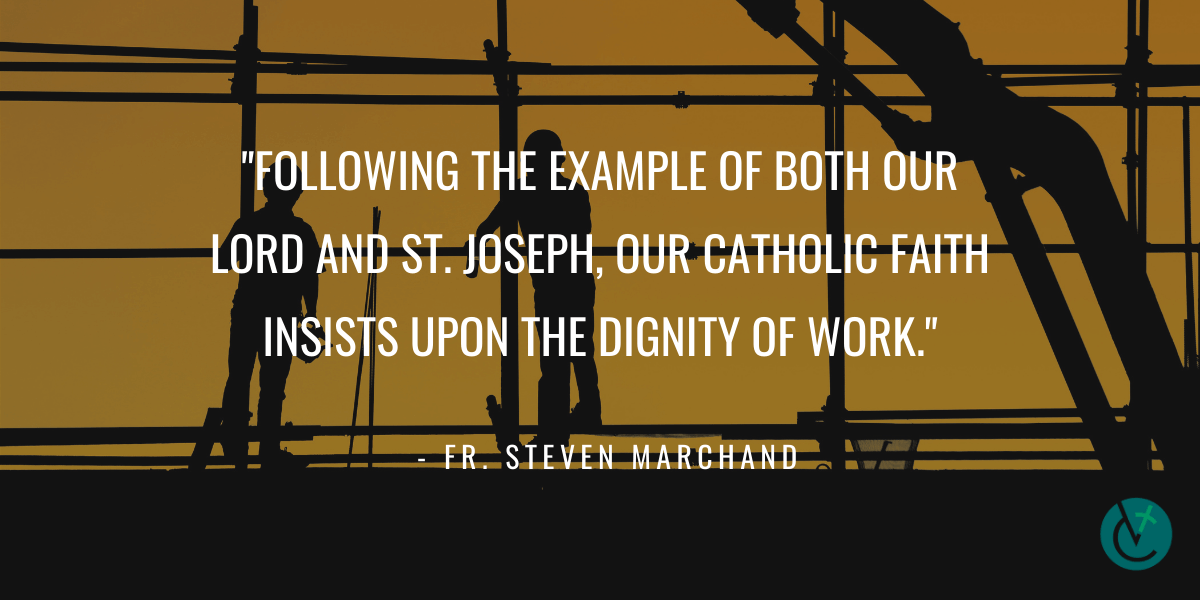 Work as a ‘positive good’

St. Joseph rightly could be considered the original “quiet man.” He is famous for having no speaking part in the scriptures. Yet let us not forget that oftentimes in the Gospels, the most profound statements are the briefest.

St. Matthew gives us a one-sentence biography of Joseph: “Joseph was a just man.” Nothing trivial, that. For St. Matthew and his original audience, to call someone “just” meant that this is a person who is in right relationship with God, someone who keeps all the commandments relating to God and man.

In fact, we read that because Joseph was decent, he decided to quietly divorce Mary after she was found with child by the Holy Spirit, being unwilling to expose her to shame. Being just, however, is much more than just being decent.

Just a few lines later, we read that “when Joseph woke from sleep, he did as the angel of the Lord commanded him.”

Joseph lives in total obedience to God’s will.

We also know from scripture that Joseph was a laborer, commonly accepted to be a carpenter. He supported the Holy Family of Mary and Jesus by the sweat of his brow and the cunning of his hands. Ponder a moment how greatly work has been sanctified by the example of St. Joseph and Jesus in that workshop in Nazareth. It is part of Christ’s work of redemption that the very things imposed upon us at The Fall as a punishment should be transformed into something good and meritorious. For example, death is an effect of the fall. And yet in Christ, we are told that if we unite our death to His we may merit eternal life.

So also with work. Following the example of both Our Lord and St. Joseph, our Catholic faith insists upon the dignity of work. The Church also insists on the rights of people to hold private property and receive a just wage for their work. By the work of their choosing, people become diligent and have the opportunity to foster their God-given talents.

Indeed, Pope Pius XII instituted the Feast of St. Joseph the Worker in 1956. It falls on May 1; this date is not accidental. May 1 is May Day, a Communist legal holiday to honor the radical workers who had participated in the Soviet revolution.

There are two principal ideas in our culture today that disparage work. The first is the threat of the communist mentality seen so clearly by Pope Pius XII. Despite its protests to be for the worker, this system sees work only as a necessary evil, something so odious that all must share the burden of it equally. The individual and all his unique talents and skills are crushed to make the collective wine of the state. Rather than receiving the just merits of his work, he receives the same as everyone else.

The second is the threat of labor exploitation. This, too, sees work only as a necessary evil, and wants the individual to be free to break out of that evil by unjustly exploiting the labor of others so that he need not work himself. Again, the laborer does not receive his just wage, and work is demeaned as fundamentally undesirable.

And yet, the feast of St. Joseph the Worker reminds us that for all of us, exercising our skills and labor quietly for the good of ourselves, our families and our communities is a positive good. It is something this great saint of the Church did not disdain to do. It is something his charge, Jesus Christ, did not disdain to do. It is a way in which we praise God and reflect His goodness in the world.

Share This Post
Saints, Evangelization and Catechesis, Father Steven Marchand, St. Joseph
See More
Last Article
HIS Pantry serves people from Bennington and beyond
Next Article
What is the Paschal Triduum?
Back to Vermont Catholic Magazine