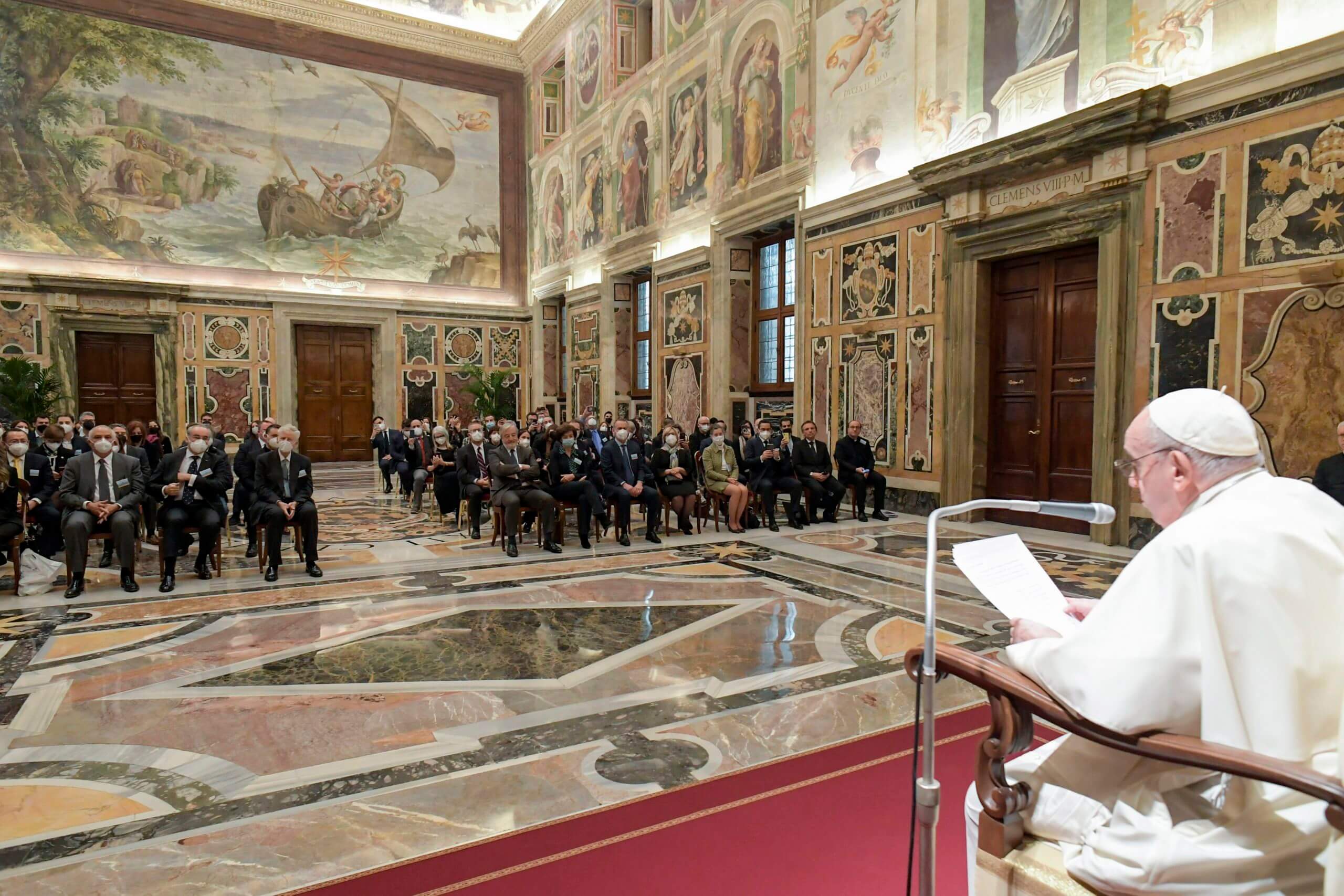 Photo Credit: CNS/Vatican Media - Pope Francis speaks during an audience with participants attending a meeting of the International Catholic Media Consortium on Covid-19 Vaccines, in the Clementine Hall at the Vatican Jan. 28.

Catholic communicators must help provide correct and truthful information about Covid-19 and its vaccines and do so in a way that avoids oversimplification and creating conflict, Pope Francis said.

“Fake news has to be refuted, but individual persons must always be respected, for they believe it often without full awareness or responsibility,” he said.

“To be properly informed, to be helped to understand situations based on scientific data and not fake news, is a human right. Correct information must be ensured above all to those who are less equipped, to the weakest and to those who are most vulnerable,” he added.

The pope held a private audience in the Apostolic Palace Jan. 28 with people attending a meeting organized by the “International Catholic Media Consortium on Covid-19 Vaccines.”

The consortium is headed by the Catholic media outlet, Aleteia, in collaboration with the Spain-based Verificat and French I.Media. Other founding media organizations include: Our Sunday Visitor, SanFrancesco.org and Religión Digital. It includes a scientific committee of researchers, medical experts, scientists, theologians and bioethicists, with the aim of collecting and making available fact-checked, unbiased information for Catholic media in multiple languages.

The “Catholic fact-checking” project was one of a dozen projects chosen in January 2021 to receive funding from the Google News Initiative’s “open fund” for projects promoting factual information about the pandemic and vaccines.

The pope thanked the group for coming together for an initiative that “seeks to be together for the truth,” underlining the importance of people cooperating and sharing their skills and knowledge to provide correct information.

The current spread of misinformation, he said, represents “a distortion of reality based on fear, which in our global society leads to an explosion of commentary on falsified, if not invented, news.”

“Contributing, often unwittingly, to this climate is the sheer volume of allegedly ‘scientific’ information, comments and opinions, which ends up causing confusion for the reader or listener,” he said.

“Accordingly, to be properly informed, to be helped to understand situations based on scientific data and not fake news, is a human right,” he said.

Christian communicators need to do more than just fight against “injustices and lies,” they also always need to promote the human person, he said. “The fundamental distinction between information and people must never be overlooked.”

As people seek to “combat disinformation, to refute fake news and the manipulation of more impressionable minds,” Pope Francis told them, they always must respect individuals and “be evangelical in style, a builder of bridges, a promoter of peace, also and above all, in the search for truth.”

Seeking the truth means tirelessly verifying data and presenting them in a suitable way that helps people in their own search for truth, he said.

This quest must not succumb to commercial interests, “to the interests of the powerful, to the great economic interests,” he said. It requires “seeking an antidote to algorithms projected to maximize commercial profit; it means working to promote an informed, just, sound and sustainable society.”

“Without an ethical corrective, those instruments generate pockets of extremism and lead individuals to dangerous forms of radicalization — and this is what conflict is,” Pope Francis said.

The approach of a Christian communicator “is not one of conflict, it is not marked by an attitude of superiority, and it does not simplify reality,” especially in a way that does not understand the limitations of science, turning into “a kind of ‘fideism,'” he said.

The pope encouraged people to engage in “dialogue with those who have doubts.”

“Reality is always more complex than we think, and we must respect the doubts, the concerns and the questions that people raise, seeking to accompany them without ever dismissing them” and to provide answers “in a serene and reasonable way to questions and objections,” the pope said.

“We should work to help provide correct and truthful information about Covid-19 and vaccines, without digging trenches or creating ghettos,” he said. “The pandemic invites us to open our eyes to what is essential, what is truly important, and the need for us to be saved together.”

“Never let a crisis turn into a conflict,” the pope said. Promote dialogue, collaborate and “let us seek to emerge from it together.”