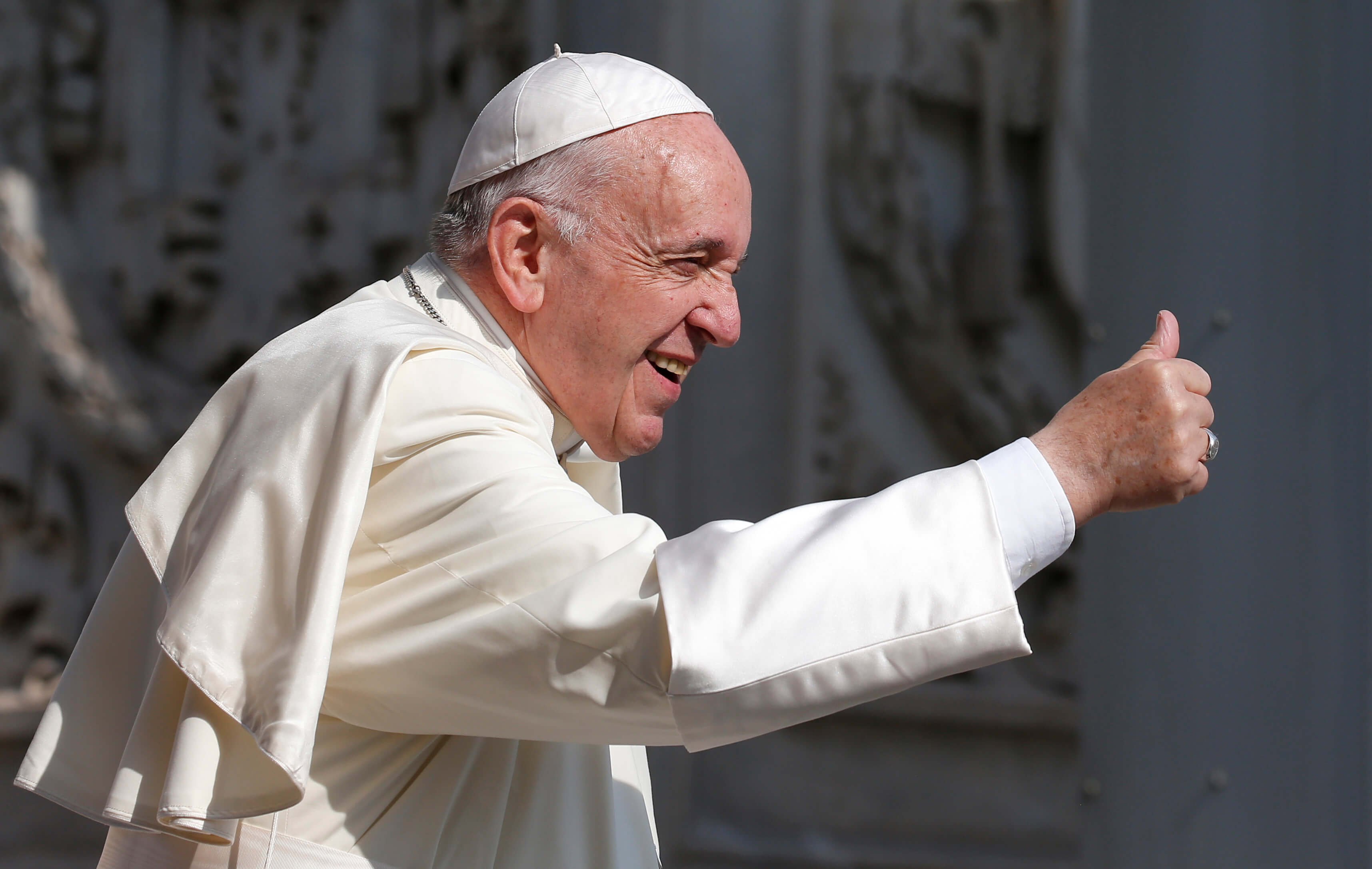 Photo Credit: CNS/Paul Haring - Pope Francis gives a thumbs up as he greets the crowd during his general audience in St. Peter's Square at the Vatican June 5.

Individualism and consumerism undermine the most basic rules of coexistence and challenge the principles of cooperation and mutual understanding promoted by Catholic education, Pope Francis said.

“The culture of indifference, which envelops relations between individuals and peoples, as well as the care of the common home, also corrodes the sense of humanism,” the pope said in a June 8 video message to participants at a three-day conference sponsored by the International Office for Catholic Education.

A “synergy of the various educational realities” is needed to confront this challenge, the pope said, and particularly requires working with families where one “learns to come out of one’s self and place oneself in front of the other, to listen, to share, to support, to respect, to help, to coexist.”

The international congress focused heavily on Pope Francis’ encyclical “Laudato Si'” and “on the contribution of the Catholic schools of the world to educate to solidarity, humanism and the safeguarding” of creation.

Catholic educational institutions, Pope Francis said in his message, are called to build a humanism that “proposes a vision of society centered on the human person and his or her inalienable rights” and capable “of instilling a soul in the same economic progress so that it may be aimed at the promotion of every man and woman in their entirety.”

“This humanistic perspective today cannot fail to include ecological education, which promotes a covenant between humanity and the environment, at the different levels of ecological balance: the interior one with one’s self, the one in solidarity with others, the natural one with all living beings and the spiritual one with God,” the pope said.

Applauding the conference participant’s efforts to develop a humanistic approach to education, the pope said that it was a difficult challenge, “which certainly cannot be tackled alone and in isolation” but must be confronted through “a work of discernment” as well as by “drawing from the great testimonies of the saints and holy educators, whose example is a beacon that can illuminate your service.”

Pope Francis said that Catholic educators are called to collaborate in “the growth process of humanity” through their professionalism and the consistent witness of their lives “to help young people become active builders of a more fraternal and peaceful world.”

“In a particular way,” he said, “Catholic educational institutions have the mission of offering horizons that are open to transcendence so that Catholic education can make a difference by cultivating spiritual values in young people.”