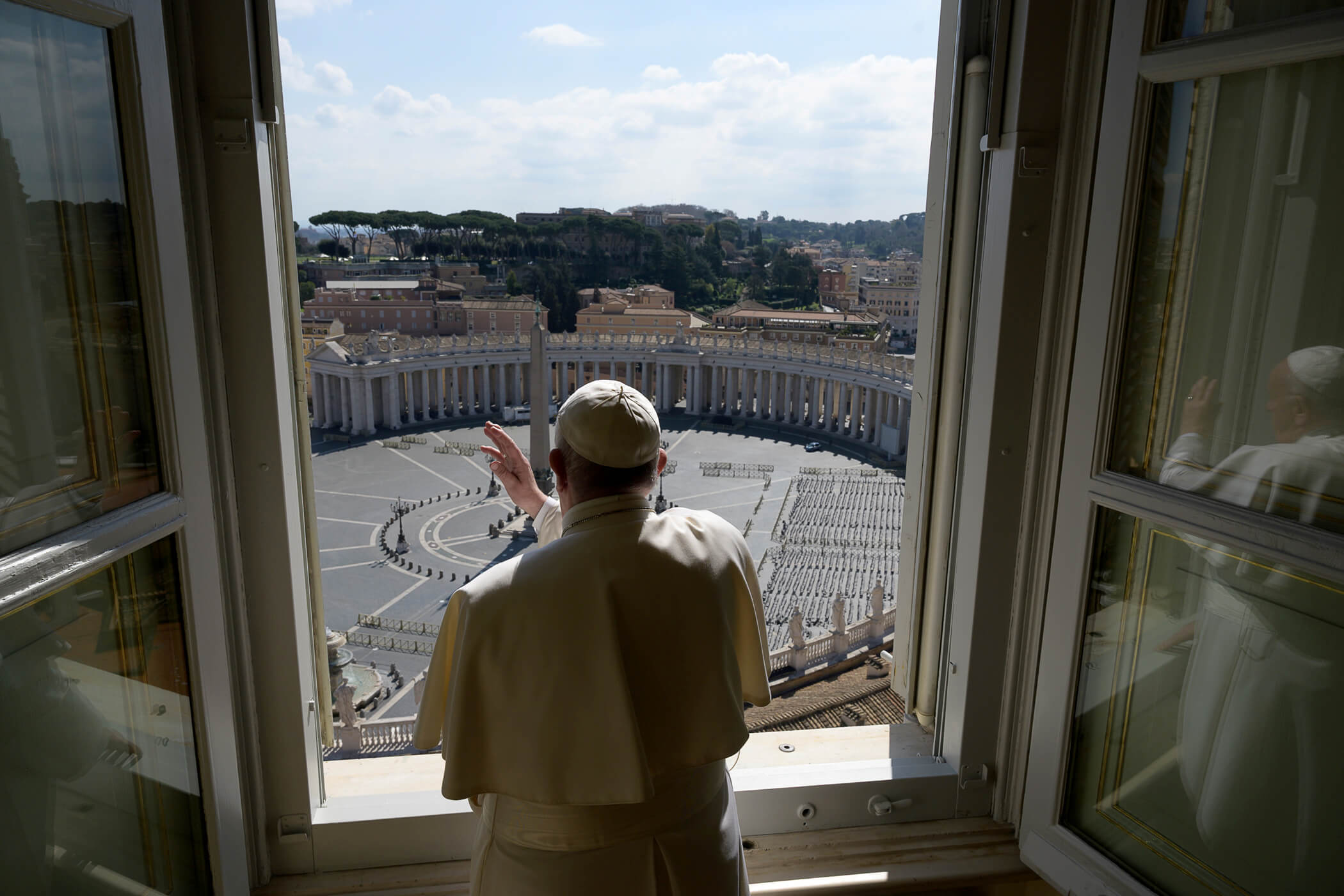 Photo Credit: CNS/Vatican Media via Reuters - Standing in the window of the library of the Apostolic Palace overlooking an empty St. Peter's Square, Pope Francis blesses the city of Rome March 15, still under lockdown to prevent the spread of the coronavirus.

Mercy, which is at the heart of the Christian life, is not a one-dimensional virtue but instead is the acceptance of God’s love and the giving of that love to others, Pope Francis said.

“There is no Christianity without mercy,” the pope said March 18 during a live broadcast of his weekly general audience from the library of the Apostolic Palace.

“If our Christianity does not lead us to mercy, we have taken the wrong path because mercy is the only true goal of every spiritual journey. It is one of the most beautiful fruits of charity,” he said.

At the end of the audience, Pope Francis urged people to join the Italian bishops’ request that Catholics pray the luminous mysteries of the rosary together March 19, the feast of St. Joseph.

“In life, in work, in family, in joy and sorrow,” the pope said, St. Joseph “always looked for and loved the Lord, earning the praise Scripture offers of being a just and wise man. Always invoke him, especially in difficult times, and entrust your lives to this great saint.”

In his main talk, the pope continued his series on the Eight Beatitudes by reflecting on the fifth beatitude, “Blessed are the merciful, for they will be shown mercy.”

In his talk, the pope said that Jesus’ formulation of mercy as something reciprocal makes it the only beatitude “in which the cause and the fruit of happiness coincide.”

However, he said, it is not the only time that Christ speaks about “the reciprocity of forgiveness.” It is found several times in the Gospels, particularly in the Lord’s Prayer which says, “Forgive us our trespasses as we forgive those who trespass against us.”

“There are two things that cannot be separated,” the pope explained. “The forgiveness given and the forgiveness received. But many people find it difficult; they cannot forgive. So many times, the evil received is so great that being able to forgive seems like climbing a very high mountain. It’s an enormous effort. Some may think, ‘This is impossible. I can’t do this.'”

Forgiveness, he continued, cannot be achieved alone, and Christians must ask for the grace to forgive and be forgiven, because if “the fifth beatitude promises that we will find mercy and in the ‘Our Father’ we ask for our debts to be forgiven, that means that we are essentially debtors and we need to find mercy.”

“We are all in debt: to God, who is so generous, and to our brothers and sisters,” he said. “Every person knows that they are not the father or mother they should be, the husband or wife, the brother or sister they should be. We know that even if we have not done evil, there is always something missing from the good we should have done.”

Pope Francis said that in welcoming God’s forgiveness, Christians can turn their misery and lack of justice into an opportunity to open themselves “to the kingdom of heaven, to a greater measure, the measure of God, which is mercy.”

“God’s mercy is our liberation and our happiness,” the pope said. “We live by mercy and we cannot afford to be without mercy. We are too poor to set the conditions, we need to forgive, because we need to be forgiven.”