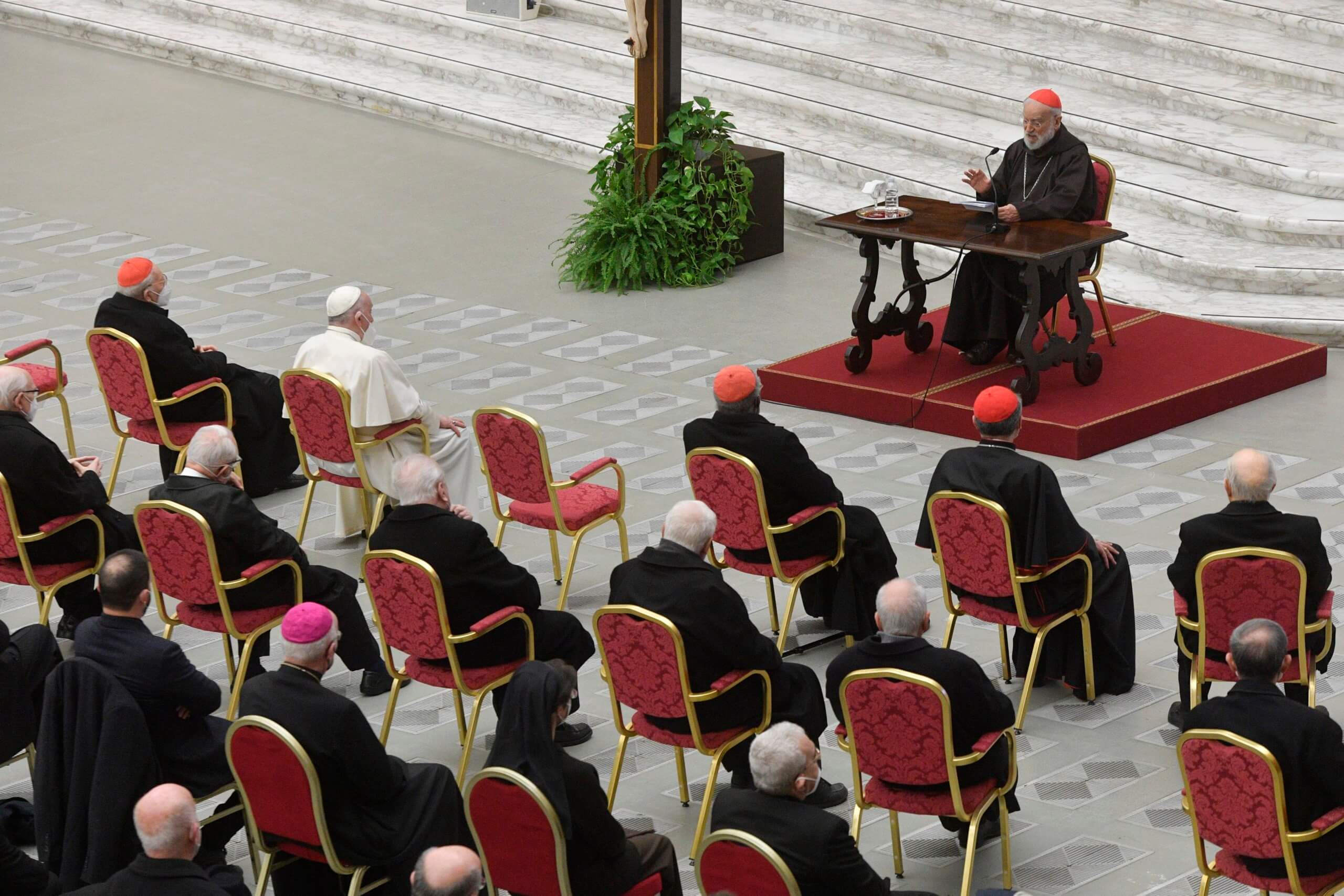 Photo Credit: CNS/Vatican Media - Cardinal Raniero Cantalamessa, preacher of the papal household, offers a Lenten meditation to Pope Francis and members of the Roman Curia in the Paul VI hall at the Vatican. The meditation was on the Eucharist.

‘Do this in memory of me’ includes serving others, cardinal says

At the Last Supper, Jesus instituted the Eucharist and commanded his disciples to serve others, said the preacher of the papal household.

“Jesus gave us the example of a life spent for others, a life made ‘bread broken for the world,'” Cardinal Raniero Cantalamessa said April 8 as he presented his final Friday Lenten meditation of 2022 to Pope Francis and members of the Roman Curia.

Washing His disciples’ feet and then commanding them to do the same for others, “Jesus therefore institutes the ‘diakonía,’ that is, service, elevating it to a fundamental law, or, better, to a lifestyle and model of all relationships in the church,” the cardinal said.

It was “as if He were saying about the washing of the feet what He said in instituting the Eucharist: ‘Do this in memory of me!'”

Cardinal Cantalamessa had dedicated his Friday morning talks to the Eucharist and particularly to the real presence of Jesus in the Eucharist.

Reflecting on the Last Supper and St. John’s account of Jesus washing his disciples’ feet, the cardinal took the opportunity to express his admiration and gratitude “to the many anonymous servants of the church who work in the Roman Curia, in diocesan chanceries and in the nunciatures” around the world.

Every gift God gives to a Christian, he said, is given for the common good and, therefore, must be placed at the service of others.

“The two things — charisma and ministry, charisma and service — always appear vitally connected to each other,” he said. “The church is charismatic to serve!”

The difference between a shopkeeper serving clients and a Christian serving others “lies in the reason for the service and in the inner attitude with which it is carried out,” he said. It must be freely offered and done with humility.

Cardinal Cantalamessa asked the pope and Curia officials to use his meditation as an opportunity for an examination of conscience about “our lives — our habits, position, schedule, distribution and use of our time — to see if it is really a service and if love and humility are part of it.”

“The important thing to know,” he said, “is whether we are serving our brothers and sisters or whether, instead, they are serving our purposes” or need for admiration or accolades.

At the same time, Cardinal Cantalamessa insisted that service to God must always be a Christian’s priority.

“It can all too easily be taken for granted that all service to humanity is God’s service,” he said. But “those, like priests, who are called by vocation to a ‘spiritual’ service, do not serve their brothers and sisters by doing all sorts of things for them and then neglecting the only thing they rightfully expect from them and which only they can render.”