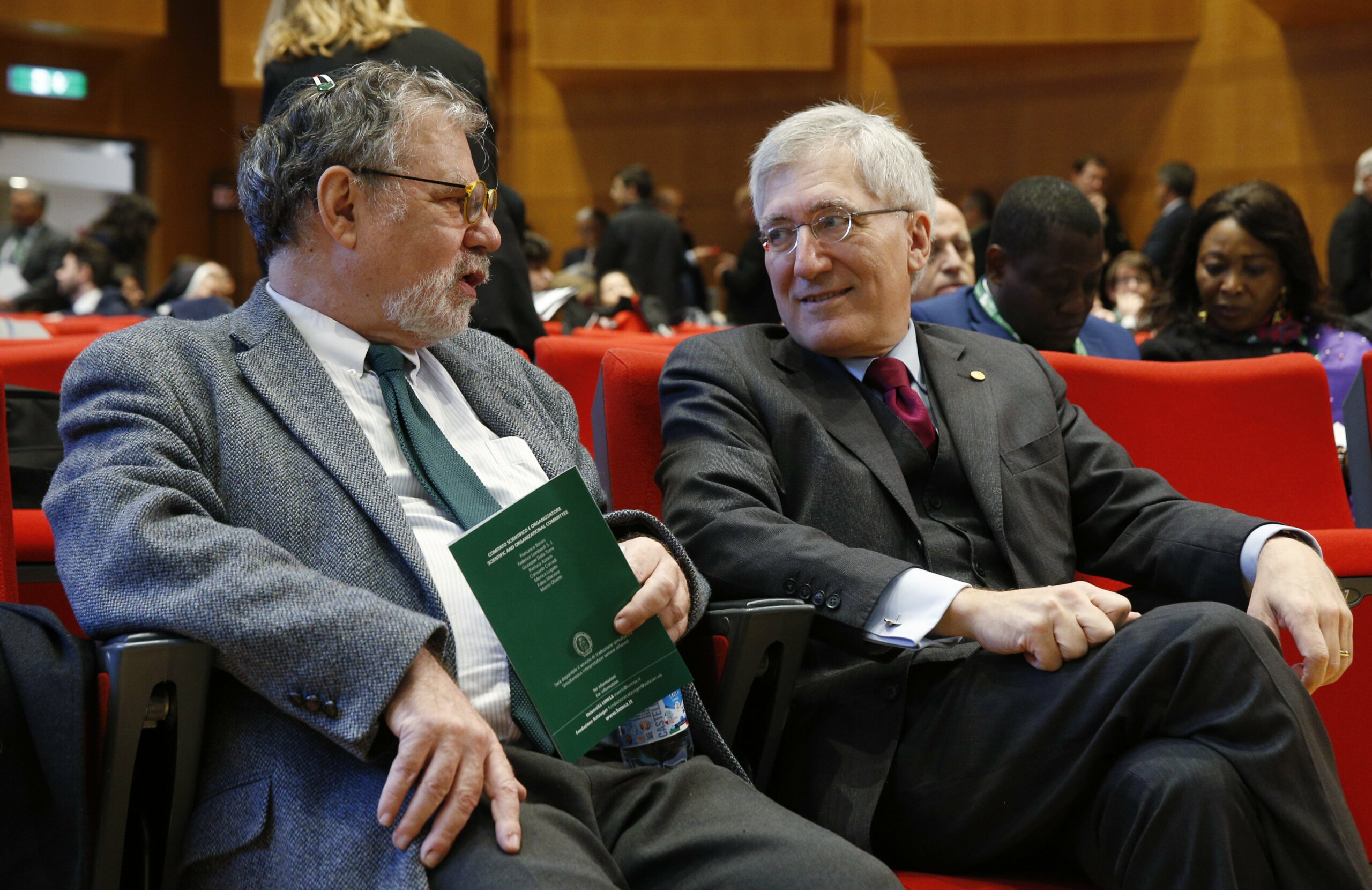 Photo Credit: CNS/Paul Haring - Joseph Halevi H. Weiler, a professor of law at New York University School of Law, talks with Robert George, a professor at Princeton University in New Jersey, during a conference on the Universal Declaration of Human Rights in Rome in this Nov. 15, 2018, file photo. Pope Francis has selected Weiler as one of two winners of the 2022 Ratzinger prize. The award honors scholars for their scientific research in the field of theology.

Pope Francis has selected a French Jesuit theologian and a Jewish law professor as winners of the Ratzinger Prize.

— Jesuit Father Michel Fédou, professor of dogmatic theology and patristics at the Centre Sèvres of Paris and dean of the faculty of theology. He is a member of several theological organizations and commissions involved in ecumenical dialogue with Lutherans and Orthodox Christians.

— Joseph H. H. Weiler, a professor of law at New York University School of Law where he also serves as European Union Jean Monnet Chair and co-director of the Jean Monnet Center for International and Regional Economic Law and Justice. He is also a senior fellow of the Minda de Gunzburg Center for European Studies at Harvard Law School.

Born in South Africa, he has dual U.S. and Italian citizenship. He served as president of the European University Institute of Florence, Italy, from 2013 to 2016 and received an honorary doctorate in theology from The Catholic University of America, Washington, D.C.

The Jewish expert in constitutional, international and European law and human rights sought to defend “pluralism” by defending Italy’s right to display the crucifix in public school classrooms in the case, Lautsi v. Italy, at the Grand Chamber of the European Court of Human Rights in 2010.

The court ruled in 2011 that nations are free to regulate religious symbols as they deem fit as long as state authorities are not seeking to indoctrinate or violate basic rights with their decisions.

Weiler also helped draft the European Parliament’s Declaration of Human Rights and Freedoms and is a founding editor of the European Journal of International Law, the European Law Journal and the World Trade Review.

The Ratzinger Prize, a sort of “Nobel Prize in Theology,” is given to two scholars each year who stand out for their scientific research in the field of theology, regardless of their religious faith.

Pope Francis was scheduled to confer the award to the winners at the Vatican Dec. 1.

The pope approves of the winners from among a short list of candidates recommended by a papally appointed five-person committee of the Joseph Ratzinger-Benedict XVI Foundation, which was established in 2010 to support theological research and to promote studies on the theology and teaching of the retired pope.

The committee seeks to include experts who are not strictly theologians or specialists in sacred Scripture, but who still enrich theological studies through their work as artists, scientists or philosophers.