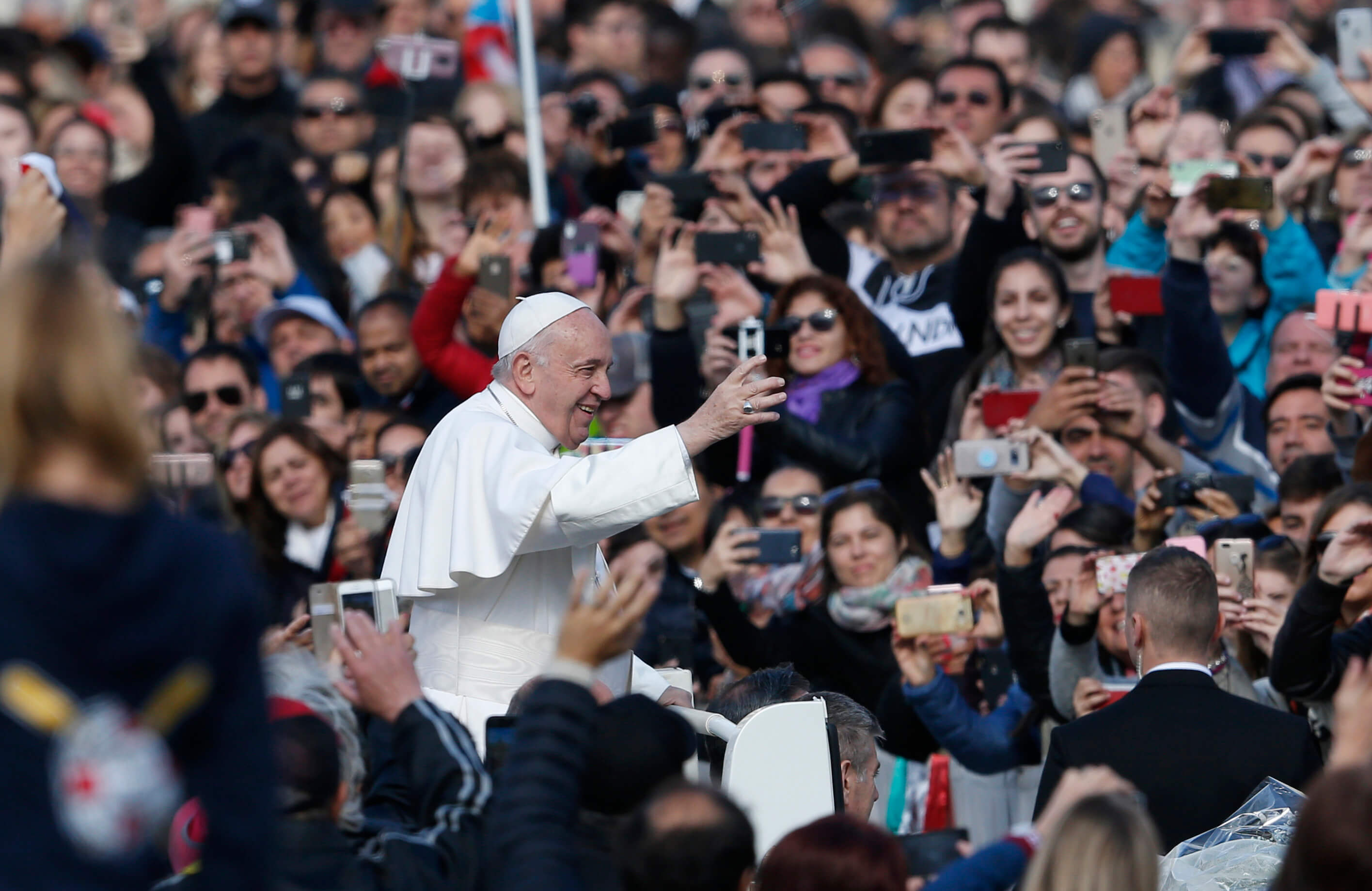 Photo Credit: CNS/Paul Haring - Pope Francis greets the crowd during his general audience in St. Peter's Square at the Vatican May 1.

God is with his people every step of the way — during times of joy and sadness, triumph and tribulation — and he always helps lead people away from the devil and his temptations, the pope said during his weekly general audience in St. Peter’s Square May 1, the feast of St. Joseph the Worker.

Marking the feast day, the pope prayed that the saint, a carpenter and Jesus’ guardian, would support people sacrificing so much to do good in the world and intercede on behalf of all those who have lost their job or cannot find employment.

Unemployment “is a global tragedy today,” he said at the end of his audience.

In his main audience talk, the pope continued his catechesis on the Lord’s Prayer, looking at the next to last invocation, “Lead us not into temptation.”

Modern translations from the original Greek expression “are a bit shaky” and do not give a precise rendering of the real meaning, he said. But recent Vatican-approved translations in some languages, like French, Italian and Spanish, include equivalents such as “Do not abandon us to temptation” or “Do not let us enter” or “fall into temptation.”

Pope Francis already highlighted the translation issue as part of a television series on the Lord’s Prayer in 2017 when he said some translations of the “Our Father” can give believers the wrong impression that God can and does lead people into temptation.

“I’m the one who falls. But it’s not (God) who pushes me into temptation to see how I fall. No, a father does not do this. A father helps us up immediately,” he had said in the interview.

The pope reiterated the same point at his general audience, saying that despite the various translations, one thing is undisputed: “We must exclude God as the source of the temptations that impede humanity in its journey as if God Himself were on the prowl, setting snares and traps for His children.”

In the Gospels, Jesus has revealed the true image of God as a loving, protective father, he said.

“Christians don’t have anything to do with a jealous God who is competing with humanity or who enjoys testing them. These are images of many pagan divinities,” the pope said.

God the father is not the source of evil, he said. Rather, when evil appears in people’s lives, God is the one “fighting at their side so that they may be freed. (He is) a God who always fights for us, not against us.”

Evil and temptation come from the devil, who even targeted Jesus in the desert before his public ministry began, Pope Francis said.

“So many people say, ‘Oh, why do you talk about the devil when it is so old-fashioned? The devil doesn’t exist.’ Well, look at what the Gospel teaches. Jesus faced the devil and was tempted by Satan,” he said.

But Jesus rejects every temptation and is victorious in His battle against evil no matter the difficulties and anguish it causes, the pope said.

During his moment of great agony in the Garden of Gethsemane, Jesus asked his friends to stay and “keep watch” with him, he said. Instead, they fell asleep.

But “during the worst moments in life, the most insufferable, the most distressing, God keeps watch with us, God fights with us, he is always near,” the pope said. “Why? Because he is a father” who never abandons his children.

The pope concluded by praying that God would “drive away from us” times of “trial and temptation.”

“But when this moment comes for us, show us that we are not alone, that Christ has already taken upon Himself the weight of that cross and he calls us to carry it with Him,” in faithful, trusting abandon to God’s love, Pope Francis prayed.