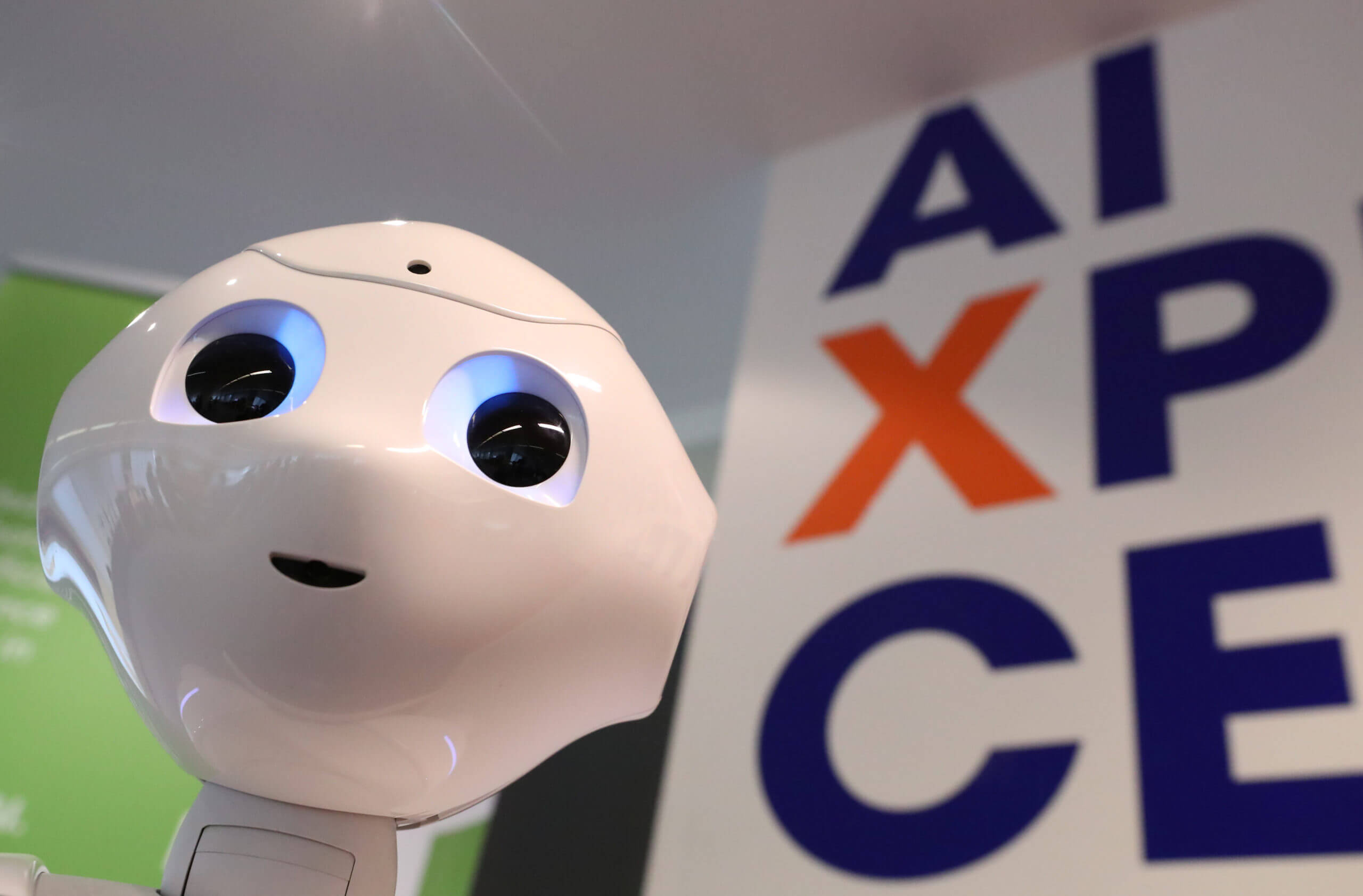 Photo Credit: CNS/Yves Herman, Reuters - A robot equipped with artificial intelligence is seen at the AI Xperience Center at the Vrije Universiteit Brussel in Brussels earlier this month. The use of artificial intelligence in science and medicine must be guided by ethical standards that place humanity and the pursuit of the common good first, Pope Francis said Feb. 28 in a message to participants in the general assembly of the Pontifical Academy for Life at the Vatican.

Humanity, ethics must be at center of AI technology, pope says

The use of artificial intelligence in science and medicine must be guided by ethical standards that place humanity and the pursuit of the common good first, Pope Francis said.

“The ethical development of algorithms — ‘algor-ethics’ — can be a bridge enabling those principles to enter concretely into digital technologies through an effective cross-disciplinary dialogue,” the pope said Feb. 28 in a message to participants in the general assembly of the Pontifical Academy for Life.

Moreover, he said, “human rights represent an important point of convergence in the search for common ground.”

The Pontifical Academy for Life sponsored a major workshop on “Robo-ethics: Humans, Machines and Health” at the Vatican Feb. 25-26 that focused on the use of robots and artificial intelligence, specifically in medicine and health care.

The event was followed by the papal academy’s general assembly Feb. 26-28, which was dedicated to studying the impact, challenges and safeguards needed for the use of artificial intelligence, and implications that AI raises in the areas of ethics, legal rights and health care.

On the assembly’s final day, the leaders of Microsoft and IBM — two of the world’s leading developers of AI software — as well as representatives of the European Parliament and the United Nations’ Food and Agriculture Organization, signed a charter calling for an ethical framework and guidelines for the field of artificial intelligence.

In his address, the pope thanked the participants of the general assembly for addressing the impact of artificial intelligence in medicine, economy and society where important decisions already are “now the result of human will and a series of algorithmic inputs.”

“A personal act is now the point of convergence between an input that is truly human and an automatic calculus, with the result that it becomes increasingly complicated to understand its object, foresee its effects and define the contribution of each factor,” he said.

Learning to adapt to the benefits and potential pitfalls of new technology is nothing new, he said, pointing to innovations such as the steam engine, electricity or the invention of the printing press, which revolutionized the way humanity stores and shares information.

Yet, the pope added, while today’s advances in science and medicine continue to “instill a sense of unlimited possibilities,” it has also led to “blurring boundaries that hitherto were considered clearly distinguishable: for example, between inorganic and organic matter, between the real and the virtual, between stable identities and events in constant interconnection.”

Dangers such as algorithms used to “extract data that enable mental and relational habits to be controlled,” however, should “not detract from the immense potential that new technologies offer. We find ourselves before a gift from God, a resource that can bear good fruits,” the pope said.

Pope Francis also expressed concern about increasing use of artificial intelligence in biological sciences and warned that the “correlation and integration between life that is ‘lived’ and life that is ‘experienced’ cannot be dismissed in favor of a simple ideological calculation of functional performance and sustainable costs.”

“The ethical problems that emerge from the ways that these new devices can regulate the birth and destiny of individuals call for a renewed commitment to preserve the human quality of our shared history,” the pope said.

He also said that the social teaching of the Catholic Church can make “a critical contribution” to the goal of developing ethical standards that protect “the dignity of the person, justice, subsidiarity and solidarity.”

“These are expressions of our commitment to be at the service of every individual in his or her integrity and of all people, without discrimination or exclusion,” the pope said. “The complexity of the technological world demands of us an increasingly clear ethical framework, so as to make this commitment truly effective.”