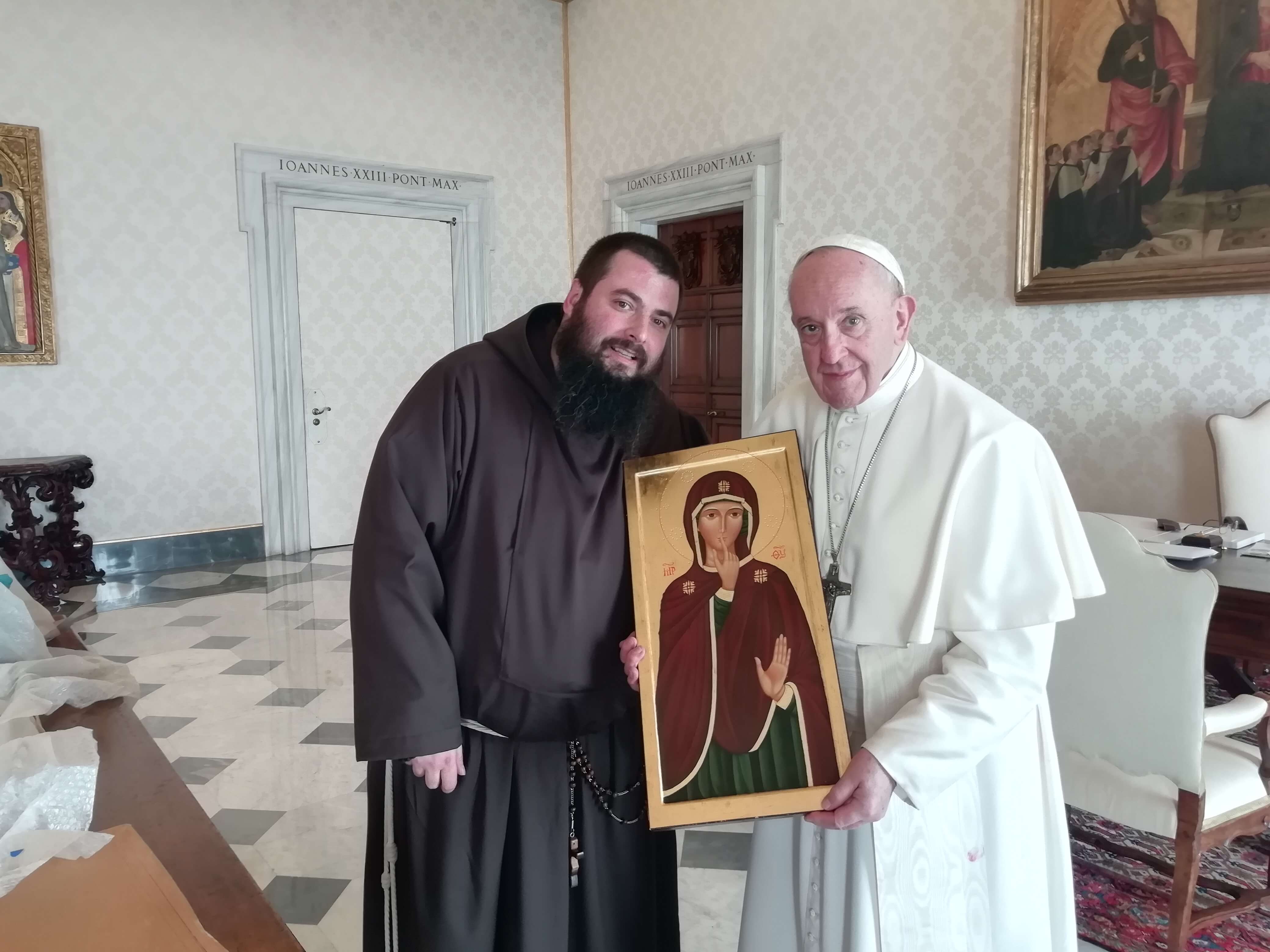 Hush hour: Spirituality of silence is a journey toward God, priest says

Pope Francis hung a bright red sign on his home-office door two summers ago that reads, “No Complaining Allowed.”

It was a succinct reminder to guests at his residence of one of his favorite invitations: drop the “sourpuss” scowl and radiate the true joy that comes from being loved by God.

Even his more formal visitors get a similar, more subtle, message as they enter the apostolic palace where the pope receives bishops and heads of state and holds other important gatherings.

Near the elevators people take to reach the papal study or meeting halls, the pope hung a copy of the icon of Our Lady of Silence — an image of Mary with her index finger poised gently in front of her closed lips.

“Just think how many Marian icons he gets (as gifts) and he decides to put this one there” as well as a smaller copy of one on his desk, said Capuchin Father Emiliano Antenucci, who commissioned the icon and gave a copy to the pope.

The preferential treatment, the priest told Catholic News Service, shows the pope’s deep understanding of the importance of holy and humble silence.

Father Antenucci has spent the past 10 years developing and offering special courses on silence, which is an important part of Christian spirituality and mental wellbeing, but, he said, is increasingly scarce in a busy, noisy, media-saturated world.

Together with a number of books he has authored, Father Antenucci’s three-day weekend retreats teach people how to carve out a moment each day of inner peace and outer quiet in order to better perceive and embrace God’s presence.

“Silence is a revolution,” he said. Silence “is the womb where words that are true are born.”

While his books and courses are currently available only in Italian and Spanish, he said he has been getting the materials translated into English and finding a publisher for North America.

Father Antenucci said Pope Francis was quite moved when he saw the icon of Our Lady of Silence the priest had first brought with him to be blessed in 2016.

The pope even wrote on the back of the wooden panel in gold pen, “Do not bad-mouth others!” which ended up being the title and cover picture of Father Antenucci’s most recent booklet, which the Vatican newspaper reviewed in late July.

The booklet is not a scolding lecture, he said, but explains what drives people to cut others down and offers techniques for “a conversion of heart.” It lists pertinent quotes from the pope and suggests a 12-step remedial program for kicking the habit of gossip, “a sport practiced all over the world,” the priest said.

The pope’s appeal for people to stop, think and not “drop bombs with their tongues” reflects the Christian understanding that people are created by God in his image, Father Antenucci said, so smearing a person’s reputation also “sullies the face of God” and makes the world a more polluted place.

Father Antenucci explained that silence asks people to suspend their judgment and be more merciful, “because we don’t know what is going on with the other person, what wounds they carry,” and that ignorance can lead to criticism.

However, not every critique or accusation is calumny or a hit job and biting one’s tongue is not an absolute rule of thumb.

Silence, like words, can be weaponized, Father Antenucci said, like the Mafia’s restrictive code of “omerta'” or the corrosive, manipulative silence among families, friends and coworkers, when needs, problems or concerns are shunned, denied or ignored.

Speaking up and out against injustice, illegality and sin comes from “Christ the liberator,” said the priest who ministers to Mafiosi in maximum security prisons and encourages young adults to fight against such evil.

Another tip comes from Socrates, he said, who advised “If what you want to say is neither true, nor good or kind, nor useful or necessary, please don’t say anything at all.”

Backstabbing, envy and slander are all rooted in the same philosophy: “Mors tua vita mea,” (“Your death, my life”) which means, “we want to put down the other in order to glorify ourselves,” he said.

That is why speaking up about something to someone requires “it not be about judgment but be about correction,” he said.

“If we judge the person, we abandon them. Whoever corrects, loves. You do it together, saying, ‘I will support you. I am here.’ This is mercy. This is the Christian way,” said the priest, who served as a papal Missionary of Mercy during the Year of Mercy.

“Condemn the sin, save the sinner,” he added.

Father Antenucci said, “in a world bombarded by noise,” everyone should experience at least 30 minutes of silence each day. “It’s good for your head, clearing your mind, and purifies your heart.”

“Christian silence” is not about seeking a sense of emptiness or nothingness, but “is about presence. It is an encounter with Jesus,” he said.

The spirituality of silence, Father Antenucci added, can be summed up best by “a very wise girl,” appropriately named Sofia, who told her mother, “who then told me, ‘If Our Lady asks us to be quiet, it’s because her son has something to tell us.'”