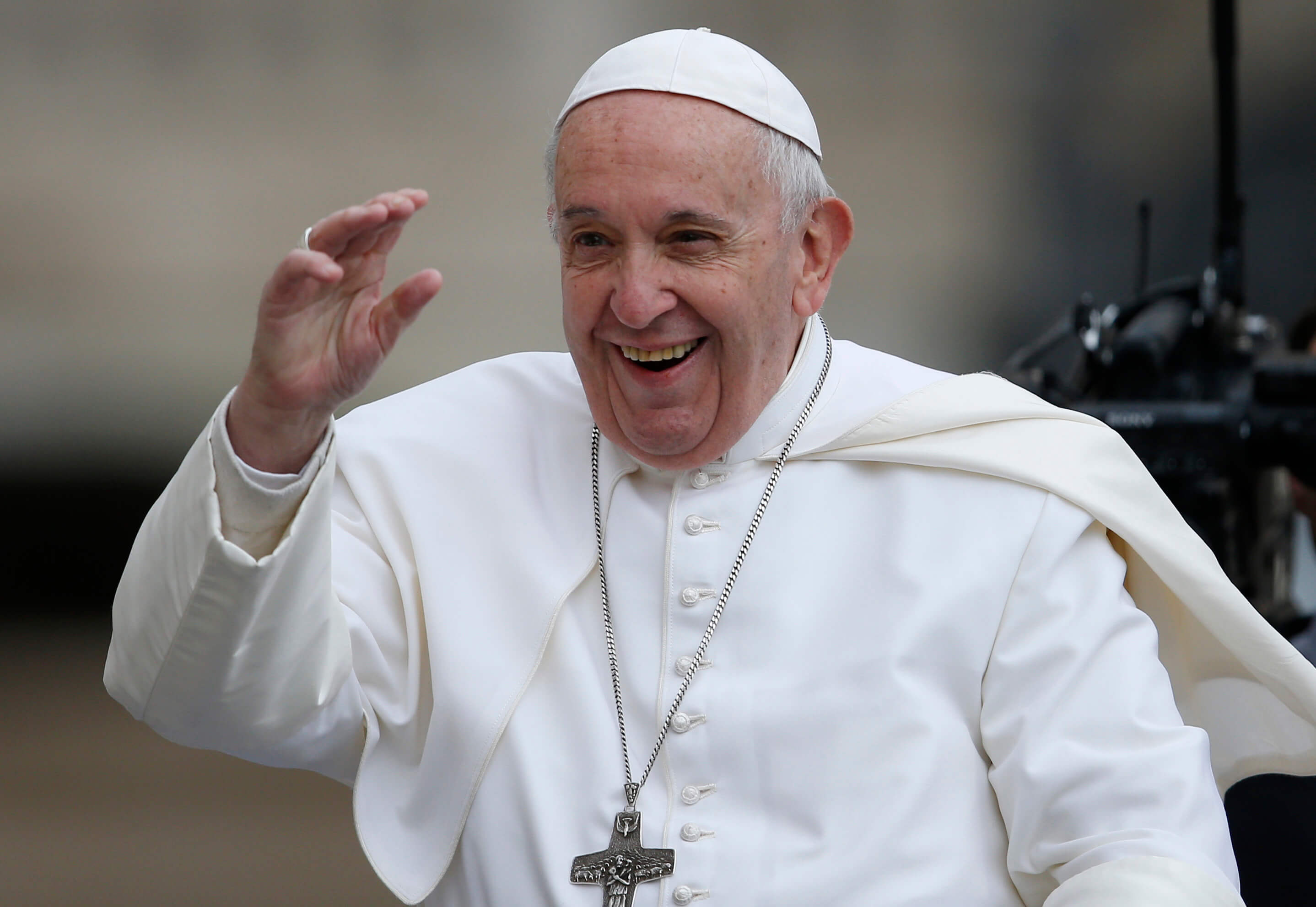 Photo Credit: CNS/Paul Haring - Pope Francis arrives to lead his general audience in St. Peter's Square at the Vatican May 15.

Christians recognize life’s great paradox that so much evil and temptation exist in the world, but that God is always present, too, ready to help and give people the strength to persevere, Pope Francis said.

Each person has been given life, “dreams of love and the good,” but is then “continuously exposed to evil” aimed against himself and those around him, so much so that “we can be tempted to despair,” the pope said during his weekly general audience May 15.

“In fact, Christian prayer does not close its eyes” to reality, he said. Christians know life can be very difficult, painful or unjust and they pray that God — who is greater and stronger than any evil — would offer strength to go on and would “deliver us from evil.”

Continuing his catechesis on the Lord’s Prayer, the pope reflected on the last invocation, “Deliver us from evil.”

Jesus teaches people to always turn to God, especially when they can feel evil’s “threatening presence,” which St. Peter said was like an angry lion, always circling, ready to “devour us,” the pope said.

The last lines of the Lord’s Prayer that call on God to “not abandon us and to deliver us,” he said, are petitions for all who find themselves in dire straits: in a situation of sin, persecution, desperation or even death.

The mysterious presence of evil is an “absolute certainty” in people’s lives, the pope said, since the devil spares no one as he moves “silently like a serpent, carrying venom.”

“Deliver us from evil,” he said, is a cry against evil that can manifest itself in so many ways, such as slavery, innocent suffering, exploitation, mourning and “the cry of innocent children.”

“Christians know how domineering the power of evil is and, at the same time, they experience how much Jesus, who never succumbed to its lure, is on our side and comes to our aid.”

The “Our Father” reminds people that the best gift people have received from Jesus is his constant presence and peace, “which is stronger than every evil,” the pope said.

Addressing Polish-speaking pilgrims at the end of the audience, Pope Francis recalled the feast of Our Lady of Fatima May 13 and how that day coincided with the assassination attempt against St. John Paul II, who was shot in St. Peter’s Square in 1981.

The pope reminded people how St. John Paul believed Our Lady saved his life and asked people pray for her protection, too.

“Let’s also remember the words of Our Lady: ‘I have come to warn humanity so that they change their life and not sadden God with grave sins. May people pray the rosary and do penance for their sins.’ Let’s listen to this admonishment, asking Mary for her maternal protection, the gift of conversion, the spirit of penance and peace for the whole world,” he said.

When he first arrived in St. Peter’s Square, Pope Francis invited eight young refugees to ride along with him in the popemobile.

Alessandro Gisotti, interim director of the Vatican press office, told reporters that the adolescent boys and girls from Syria, Nigeria, Congo and other countries had come to Italy from Libya through a humanitarian corridor initiative. They were living with their families at a welcoming center south of Rome.