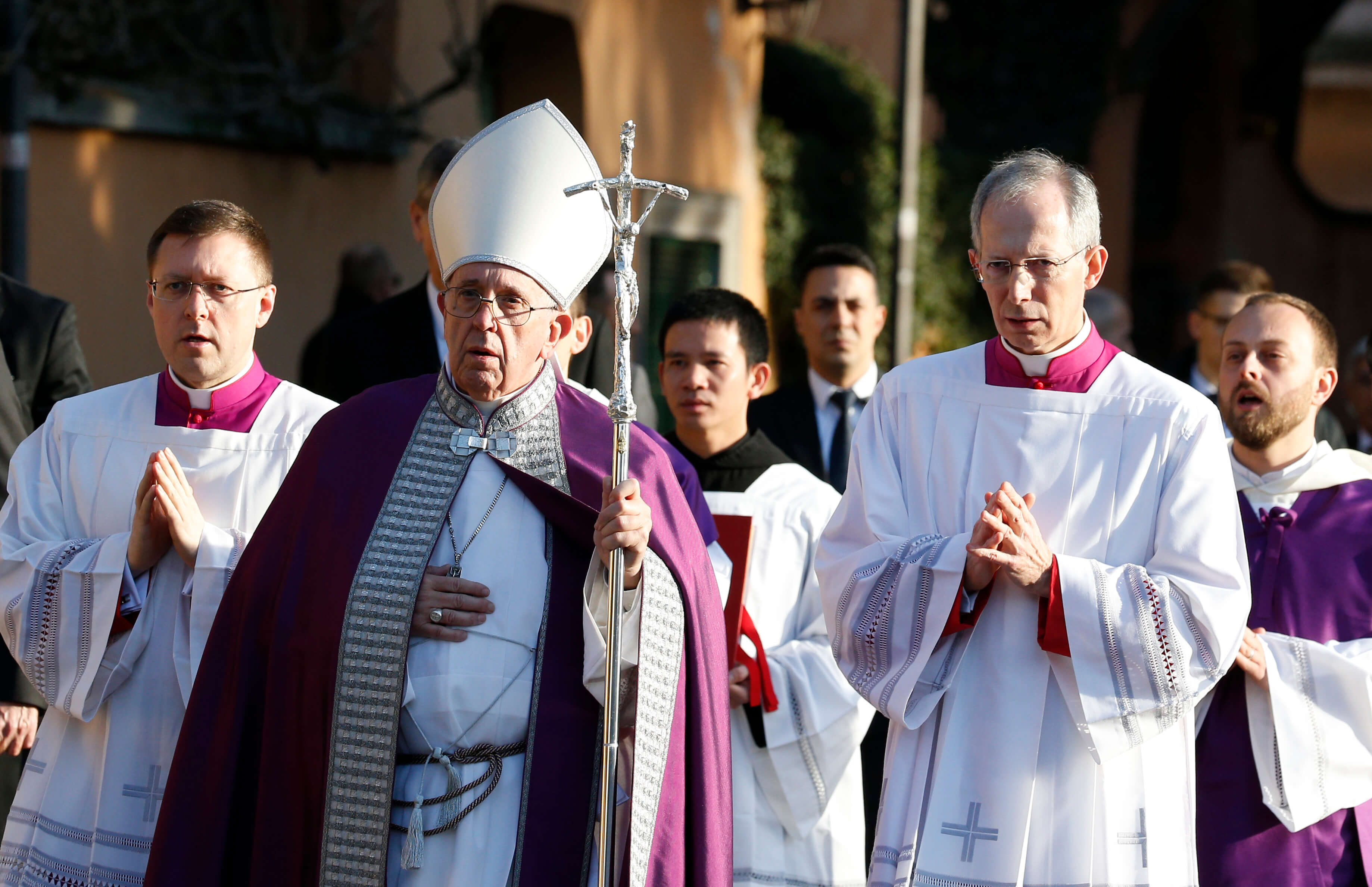 Lent begins with reminder of all that fades away, pope says

Marked with ashes, Christians set off on a Lenten journey where they strive to leave behind everything that will turn to dust and instead focus on drawing closer to God and God’s promise of eternal life, Pope Francis said.

After a brief prayer at the Benedictine’s Monastery of St. Anselm on Rome’s Aventine Hill, Pope Francis walked in the short Ash Wednesday procession to the Mass at the Dominican-run Basilica of Santa Sabina March 6.

Cardinal Jozef Tomko, who was to celebrate his 95th birthday March 11 and is the titular cardinal of the basilica, sprinkled ashes on Pope Francis’ head before the pope distributed ashes to Cardinal Tomko and the other cardinals present, as well as to Benedictines from St. Anselm, Dominicans from Santa Sabina and some laypeople.

In his homily, the pope said the Old Testament fast was announced with a trumpet blast; “it is a loud sound that seeks to slow down our life, which is so fast-paced, yet often directionless. It is a summons to stop, to focus on what is essential, to fast from the unnecessary things that distract us. It is a wake-up call for the soul.”

The main message of Lent is Lord’s call, “Return to me,” he said.

Moving back toward the Lord requires moving past things that often distract or derail a person’s journey, he said, listing: “thinking only of feeling good, solving some problems and having fun,” or the search for wealth, the thirst for power or the accumulation of things.

“The small mark of ash, which we will receive, is a subtle yet real reminder that of the many things occupying our thoughts, that we chase after and worry about every day, nothing will remain,” he said. “Earthly realities fade away like dust in the wind.”

The church suggests prayer, fasting and almsgiving in Lent to help people get back on the path to holiness and to the Lord, the pope said.

“Prayer reunites us to God; charity, to our neighbor; fasting, to ourselves,” he said. “God, my neighbor, my life: These are the realities that do not fade away and in which we must invest.”

“Lent is a time of grace that liberates the heart from vanity,” Pope Francis said. “It is a time of healing from addictions that seduce us. It is a time to fix our gaze on what abides.”

To keep focused during the 40 days of Lent, Pope Francis encouraged Catholics to keep their eyes on the cross.

“Jesus on the cross is life’s compass, which directs us to heaven,” he said. “The poverty of the wood, the silence of the Lord, his loving self-emptying show us the necessity of a simpler life, free from anxiety about things.

“From the cross, Jesus teaches us the great courage involved in renunciation. We will never move forward if we are heavily weighed down. We need to free ourselves from the clutches of consumerism and the snares of selfishness, from always wanting more, from never being satisfied, and from a heart closed to the needs of the poor.”

Lent, he said, “begins with the ashes, but eventually leads us to the fire of Easter night; to the discovery that, in the tomb, the body of Jesus does not turn to ashes, but rises gloriously.”

Though their names may not be as familiar to us today, the story of Sts. Perpetua and Felicity and [...]