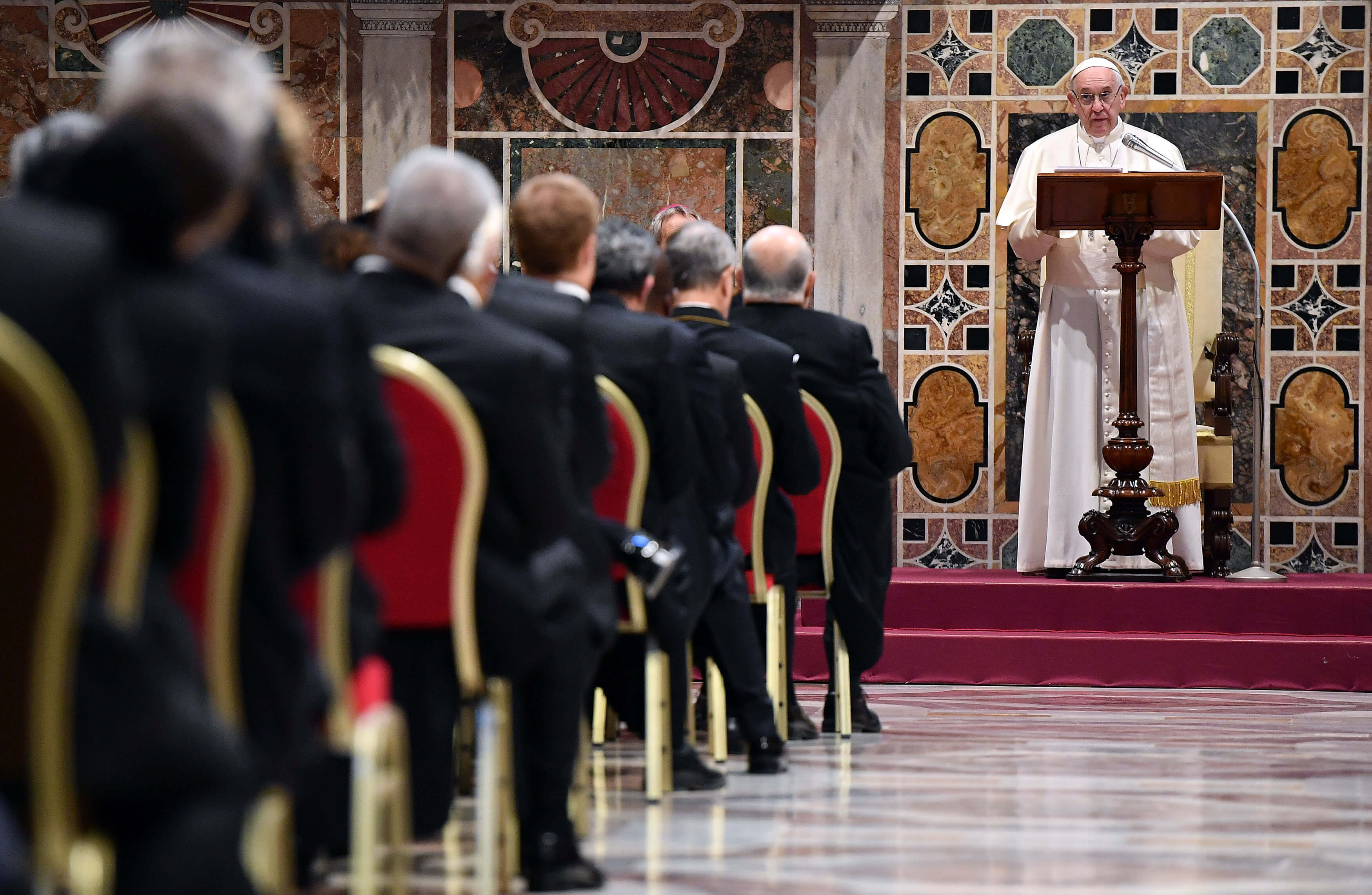 Photo Credit: CNS/Ettore Ferrari, pool via Reuters - Pope Francis leads an annual meeting to exchange greetings for the new year with diplomats accredited to the Holy See, at the Vatican Jan. 7.

As it did prior to the Second World War, the rise of nationalism in the world poses a threat to peace and constructive dialogue among nations, Pope Francis said.

During his annual address to diplomats accredited to the Vatican, the pope said that the establishment of the League of Nations nearly 100 years ago ushered a new era of multilateral diplomacy based on goodwill, readiness among nations to deal fairly and honestly with each other and openness to compromise.

However, he warned in his speech Jan. 7 that the lack of one of those necessary elements results in nations searching “for unilateral solutions and, in the end, the domination of the powerful over the weak.”

“The League of Nations failed for these very reasons, and one notes with regret that the same attitudes are presently threatening the stability of the major international organizations,” the pope said.

Clearly, he added, “relationships within the international community, and the multilateral system as a whole, are experiencing a period of difficulty with the resurgence of nationalistic tendencies at odds with the vocation of the international organizations to be a setting for dialogue and encounter for all countries.”

In his nearly one-hour speech to the diplomats, the pope warned that the re-emergence of populist and nationalist ideologies is “progressively weakening” multilateral institutions and subsequently creating a “general lack of trust, a crisis of credibility in international political life and a gradual marginalization of the most vulnerable members of the family of nations.”

An essential aspect of good politics, he said, is the pursuit of the common good that would enable individuals and the international community as a whole to “achieve their proper material and spiritual well-being.”

“Peace is never a partial good, but one that embraces the entire human race,” he said.

Recalling the ongoing humanitarian crises in countries such as Ukraine and Syria, Pope Francis urged the international community to defend the most vulnerable in the world “and to give a voice to those who have none.”

Among those most affected by instability, he noted are Christian communities in the Middle East where many people have been forced to flee from violence and persecution, particularly due to the resurgence of attempts “to foment hostility between Muslims and Christians.”

The pope expressed his hope that his upcoming visits to the United Arab Emirates and to Morocco would provide an opportunity to “advance interreligious dialogue and mutual understanding between the followers of both religions.”