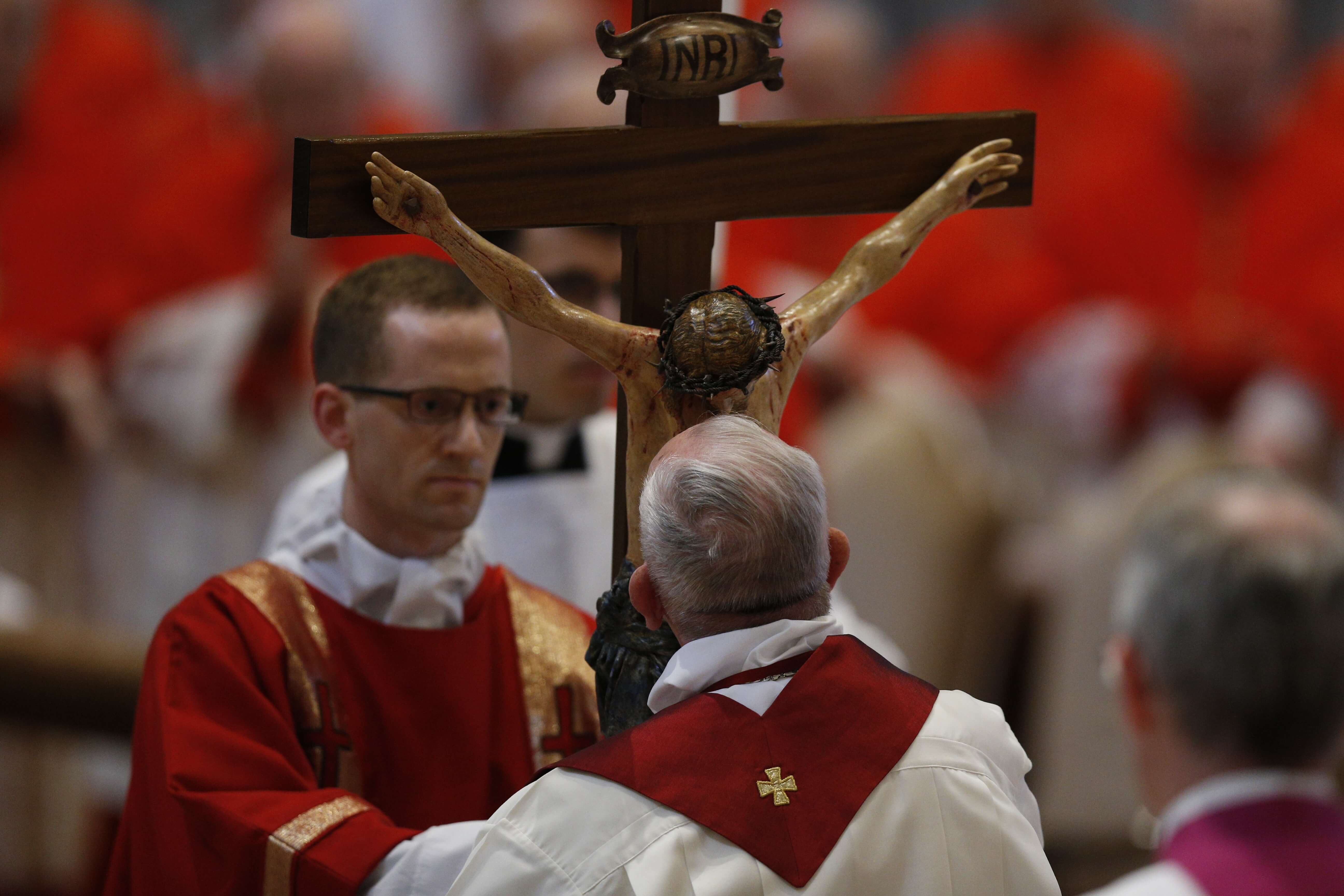 The cross serves as a warning to the powerful and a message of hope for the poor and oppressed, said the preacher of the papal household.

With Christ’s crucifixion, death and resurrection, “a total reversal of roles has taken place: The vanquished has become the victor; the one judged has become the judge,” Capuchin Father Raniero Cantalamessa said during an April 19 service commemorating Christ’s death on the cross.

“The final word is not and never will be injustice and oppression. Jesus not only restored dignity to the disinherited of the world, He also gave them hope,” he said.

Pope Francis presided over the Good Friday Liturgy of the Lord’s Passion, which began with a silent, solemn procession down the central nave of St. Peter’s Basilica. Two aides then helped the 82-year-old pope down onto his knees as he stretched himself prostrate on the floor before the main altar of the basilica, in silent prayer, in a sign of adoration and penance.

During the liturgy, the pope and thousands of faithful stood as three deacons and the Sistine Chapel Choir chanted the account of the Passion from the Gospel of St. John. As is customary, the papal household’s preacher gave the homily.

Father Cantalamessa said the crucified Christ represents everyone who is despised and rejected; “the greatest man in history was one of you,” he said, “the discarded of the Earth, those from whom we turn aside our faces so as not to see them.”

Jesus, who was bound, mocked and tortured by soldiers, is the epitome of all those who are handcuffed, “alone, at the mercy of soldiers and thugs, who take out the rage and cruelty they stored up during their lives on the unfortunate poor,” the papal preacher said. On the cross, Jesus “becomes the symbol of this part of humanity that is humiliated and insulted.”

This is the mandate the Church has received — “to stand with the poor and the weak, to be the voice for those who have no voice,” Father Cantalamessa said.

All religions, in fact, must not only promote peace, they must not remain silent “in the face of the situation that is there for everyone to see. A few privileged people possess more goods than they could ever consume, while for entire centuries countless masses of poor people have lived without having a piece of bread or a sip of water to give their children,” he said.

The cross, therefore, also contains a message for those who are powerful and “comfortable in their role as ‘victors,'” he said.

“It is a message, as always, of love and salvation, not of hate or vengeance,” but it reminds them that they, too, are bound to the same fate of divine judgment in the end: “Whether weak or strong, defenseless or tyrannical, all are subjected to the same laws and to the same human limitations.”

The cross, a sign of hope and a world redeemed from sin, also “warns against the worst evil for a human being, the illusion of omnipotence,” he said.

Anyone who knew St. Anselm as a typical pleasure loving youth might have been surprised at just how [...]