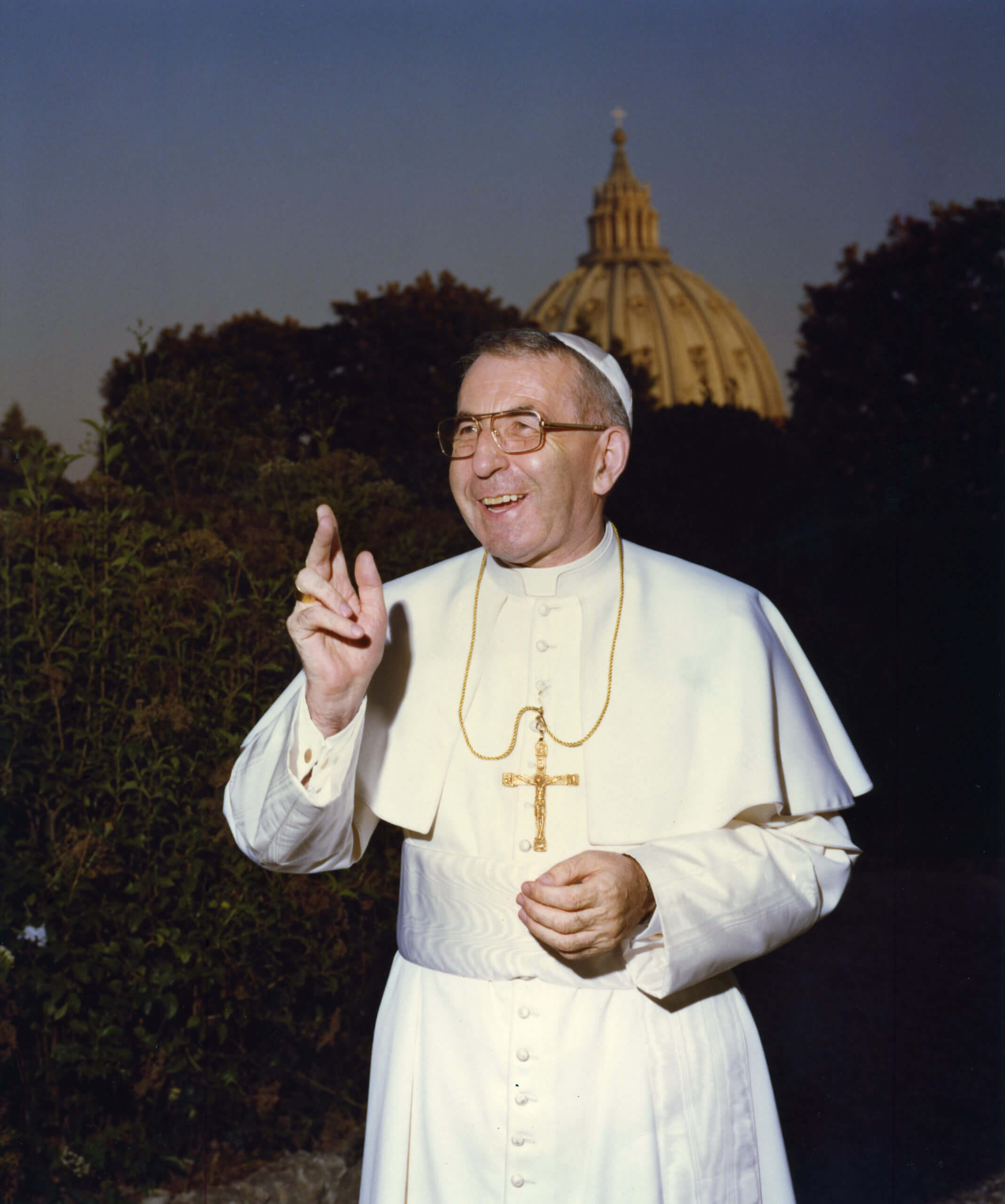 Photo Credit: CNS/courtesy of Stefania Falasca - This is the cover of the book, "Pope Luciani: Chronicle of a Death." The Vatican announced April 28 that Pope Francis approved the establishment of the John Paul I Vatican Foundation to preserve and promote the writings, thinking, example and study of "the smiling pope."

Pope Francis approved the establishment of the John Paul I Vatican Foundation to preserve and promote the writings, thinking, example and study of “the smiling pope.”

The pope also appointed as the foundation president Cardinal Pietro Parolin, Vatican secretary of state, who, like Pope John Paul, is from Italy’s northern Veneto region.

The Vatican made the announcement April 28.

Born Albino Luciani in 1921, Pope John Paul I served only 33 days as pope. He died in 1978 at the age of 65, shocking the world and a church that had just mourned the death of St. Paul VI.

St. John Paul II said his predecessor’s importance was inversely proportional to his brief pontificate, and Cardinal Parolin said this pope “was and remains a point of reference within the history of the universal church.”

Much about the pope, his life and work has been gathered over the course of his sainthood cause, which Pope Francis furthered in 2017 with the recognition that Pope John Paul lived the Christian virtues in a heroic way.

Cardinal Parolin said in a written commentary in the Vatican newspaper, L’Osservatore Romano, April 28 that assembling all the sources of information for the sainthood cause has spurred on new research and important details from a historical point of view.

“Therefore, a necessary reclaiming of the memory of Pope Luciani is now possible so that his historical significance may be fully restored” and new prospects be opened to greater study into his work, the cardinal wrote.

Having this new foundation, he added, would allow for the needed preservation of all of the late-pope’s works and writings, and would help promote his thinking and spirituality, particularly since his example and message are “extraordinarily timely” today.

This Italian pope, born into poverty in a small mountain village, was “a pastor near to his people, focused on the essentials of the faith, including an extraordinary social sensitivity,” the cardinal wrote.

“Being close, humility, simplicity, insisting on God’s mercy, love for one’s neighbor and solidarity are some of his major characteristics,” he wrote.

The foundation will sponsor various initiatives, including conventions, meetings, seminars and study sessions and will eventually offer scholarships and other types of awards. It will also publish research and be a point of reference throughout the world for people who wish to further their studies regarding Pope John Paul I.

According to the Vatican communique, Cardinal Parolin named six members to the foundation’s administrative board. With each serving a five-year term, the members include: Cardinal Beniamino Stella, prefect of Congregation for Clergy, who was a young priest in the Diocese of Vittorio Veneto when Pope John Paul was its bishop and is postulator of the pope’s sainthood cause; Stefania Falasca, a journalist and vice postulator of the cause; and Lina Petri, one of the pope’s nieces.

The six members of the foundation’s scientific committee had yet to be named.