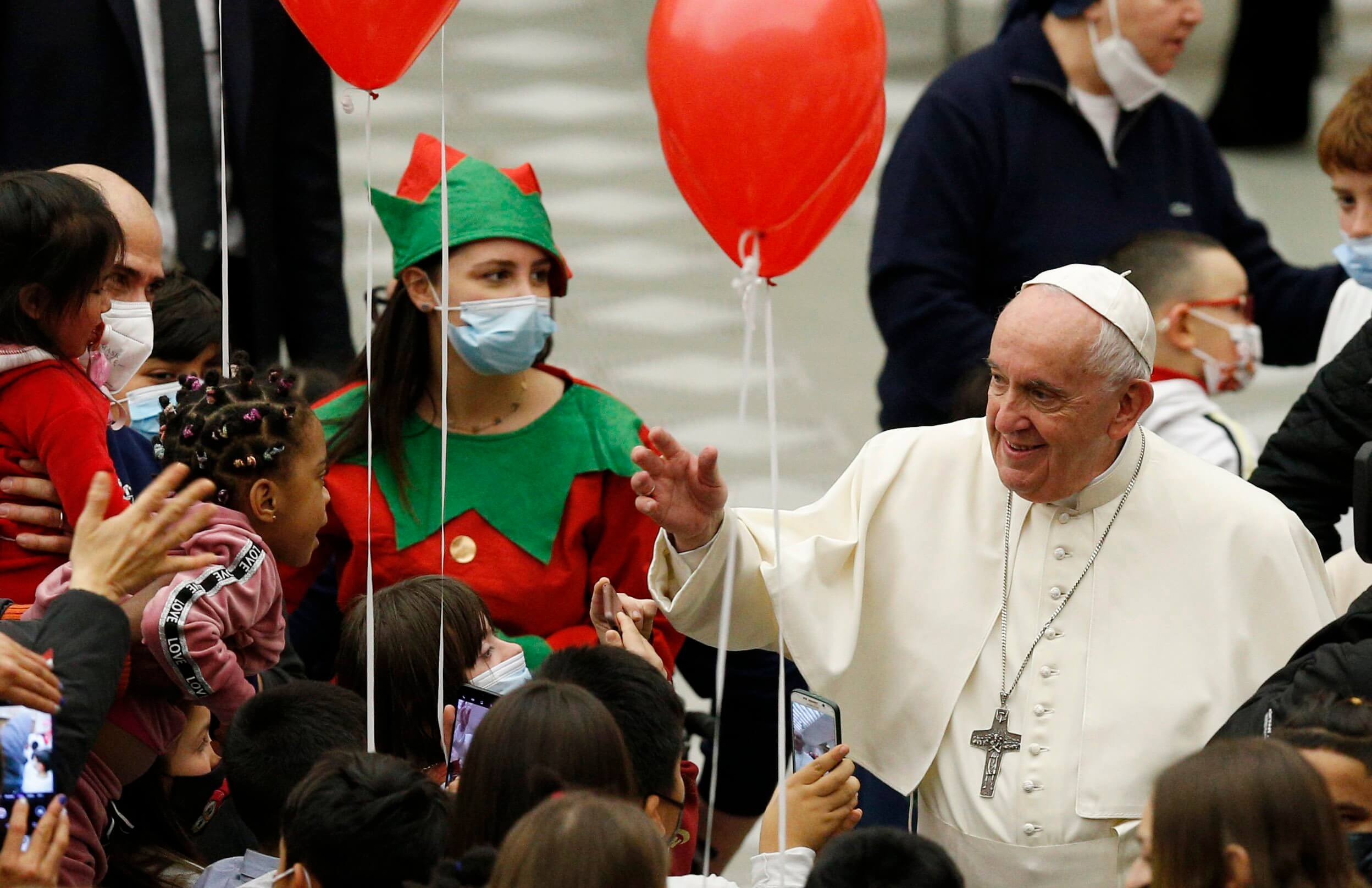 Photo Credit: CNS/Paul Haring - Pope Francis greets people during a meeting with children assisted by the Vatican's St. Martha pediatric clinic in the Paul VI hall at the Vatican Dec. 19. The pope offered Christmas blessings and urged the children to listen to and help people in need.

Pope: Be ‘merry’ this Christmas, but don’t forget Jesus

Pope Francis asked people to celebrate a “real Christmas” by recognizing Jesus in their lives and cultivating peace in their hearts.

“What is Christmas? Is it a tree? A statue of a baby with a woman and a man nearby? Yes, it is Jesus, the birth of Jesus,” he said, so “stop for a bit and think of Christmas as a message, a message of peace.”

The pope’s words were aired Dec. 19, the last Sunday of Advent, on Italy’s Canale 5 in the special program, “Francis and the Invisible: The pope encounters the least.”

The program, recorded in the pope’s residence, featured a televised “dialogue” and interview with four people facing serious challenges in their lives: Giovanna, a mother of four who experienced domestic violence and lost her home and job during the COVID-19 pandemic; Maria, who lives in a shelter after sleeping on the streets; Pierdonato, who is serving two life sentences in prison; and Maristella, an 18-year-old student and Girl Scout who was representing all young people who felt isolated and abandoned because of the lockdown and restrictions in place during the pandemic.

Each gave the pope a brief account of the challenges they had been facing as well as their ongoing concerns, doubts and questions about what next steps to take.

For example, Giovanna said she lost her faith the day she and her kids managed to escape a life of poverty and violence and asked, “What can we do to regain our dignity?” and how could she give her children strength.

The pope said the abuse of women by their partners “is almost satanic because it is taking advantage of the weakness of someone who cannot defend herself,” and he also criticized the “humiliating” affront of a parent slapping a child on the face.

When reflecting on the dignity of women who have experienced abuse, the pope said the image that comes to mind is Michelangelo’s Pietà with “Our Lady humiliated before her child — naked, crucified and a miscreant in everyone’s eyes.”

“But she has not lost her dignity and to look at this image during difficult times like yours of humiliation and where you feel you’ve lost your dignity, looking at that image gives us strength,” he said.

He said she was already showing her kids’ strength and said the real problem was finding “a concrete way out — a job, a home and this does not depend only on you,” encouraging her to reach out for help and not be afraid of this moment of crisis, made worse by the pandemic.

He told Giovanna he could see the suffering on her face, but also her dignity, “because you would not be here” if she had none left. “You are on a journey, the danger is to give up” and to see no way out, but “you are still on your feet like Our Lady before the cross.”

Maria described the risks of having no shelter and how that leads to trying to be invisible for safety, but how sad and demeaning it is to feel invisible and hear criticism when people pass by. “Why is society so cruel toward the poor?” she asked the pope.

It is cruelty, he said, “it is the harshest slap in the face for you for society to ignore the problems of others,” perpetuating the culture of indifference which seeks to push aside real problems, such as the lack of housing and employment.

“Indifference is cruel, but do not lose hope, keep walking, keep going, perhaps someone will listen to this and help will arrive, not just material help, but the help of someone who will (touch your) heart and begin to understand the problem,” he said.

Speaking with Pierdonato, who asked whether there was hope for people who wanted to change their lives, the pope said true hope, which comes from God, never disappoints.

“God exists, not in outer space, but next to you, because the way of God is closeness, compassion and tenderness,” he said. God is always with those in prison and those experiencing hardship because his very nature is to be close and a “travel companion,” he added.

But it is also important that the prison system never close the door on hope by depriving people of the chance to change, which is why “the church is against the death penalty, because with death there is no ‘window,’ no hope, it ends a life,” he said.

Responding to Maristella, the pope encouraged her and her generation to continue to seek “real” dialogue and in-person relationships, not just virtual ones, and he assured her it is normal to have doubts, to question or even be angry with God.

The important thing is to have a heart at peace because “an anxious heart cannot seek God, cannot maintain a relationship with God,” so it is important to find serenity, even when experiencing suffering or difficulties, he said.

“You must have the courage to tell the Lord all of your feelings as they come — with the Gospel in hand and a heart at peace,” he added.

The pope concluded by wishing those with him and watching on TV “a real Christmas” with Jesus.

It is OK to celebrate, exchange gifts, eat and be merry, he said, “but do not forget Jesus. Christmas is Jesus who comes, who comes to touch our hearts,” families, homes and lives.

Share This Post
Pope Francis, Christmas, Poor
See More
Last Article
Christmas is about coming together’ even in an ongoing pandemic
Next Article
Movie review: ‘Sing 2’
Back to Vermont Catholic Magazine