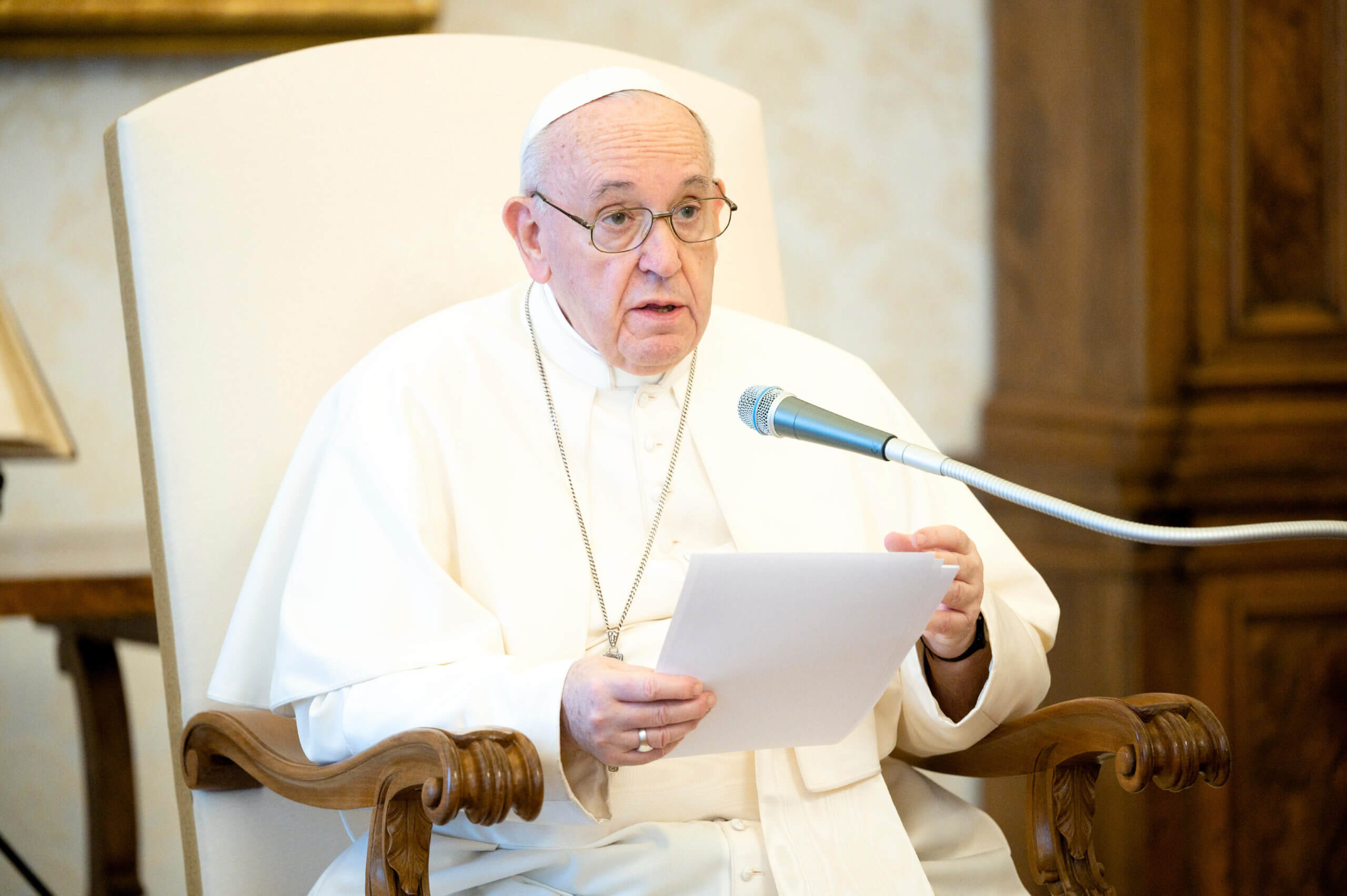 Photo Credit: CNS/Vatican Media - Pope Francis speaks during his weekly general audience in the library of the Apostolic Palace at the Vatican June 3. During the audience, the pope prayed for George Floyd and said, "We cannot tolerate or turn a blind eye to racism."

Observing with great concern the social unrest unfolding in the United States, Pope Francis said no one can claim to defend the sanctity of every human life while turning a blind eye to racism and exclusion.

Addressing all “dear brothers and sisters in the United States” during his livestreamed general audience June 3, the pope said, “Today I join the Church in St. Paul and Minneapolis, and in the entire United States, in praying for the repose of the soul of George Floyd and of all those others who have lost their lives as a result of the sin of racism.”

“Let us pray for the consolation of their grieving families and friends and let us implore the national reconciliation and peace for which we yearn,” he said in Italian.

The pope said he has “witnessed with great concern the disturbing social unrest in your nation in these past days, following the tragic death of Mr. George Floyd,” a 46-year-old man, whose last moments of life were recorded on a widely disseminated video showing a white police officer in Minneapolis pushing down on his neck with his knee May 25. Floyd was later pronounced dead.

“My friends, we cannot tolerate or turn a blind eye to racism and exclusion in any form and yet claim to defend the sacredness of every human life. At the same time, we have to recognize that ‘the violence of recent nights is self-destructive and self-defeating. Nothing is gained by violence and so much is lost,'” he said, quoting Archbishop Jose H. Gomez of Los Angeles, president of the U.S. Conference of Catholic Bishops.

The pope prayed for the intercession of Our Lady of Guadalupe, Mother of America, to assist “all those who work for peace and justice in your land and throughout the world. May God bless all of you and your families.”

Hundreds of thousands of people turned out nationwide to protest Floyd’s death. And many of the country’s Catholic bishops joined the calls for justice.

Four officers from the Minneapolis Police Department were fired May 26, including Derek Chauvin, with whom Floyd pleaded “Please, I can’t breathe” as he held him down. Chauvin is facing third-degree murder and second-degree manslaughter charges.