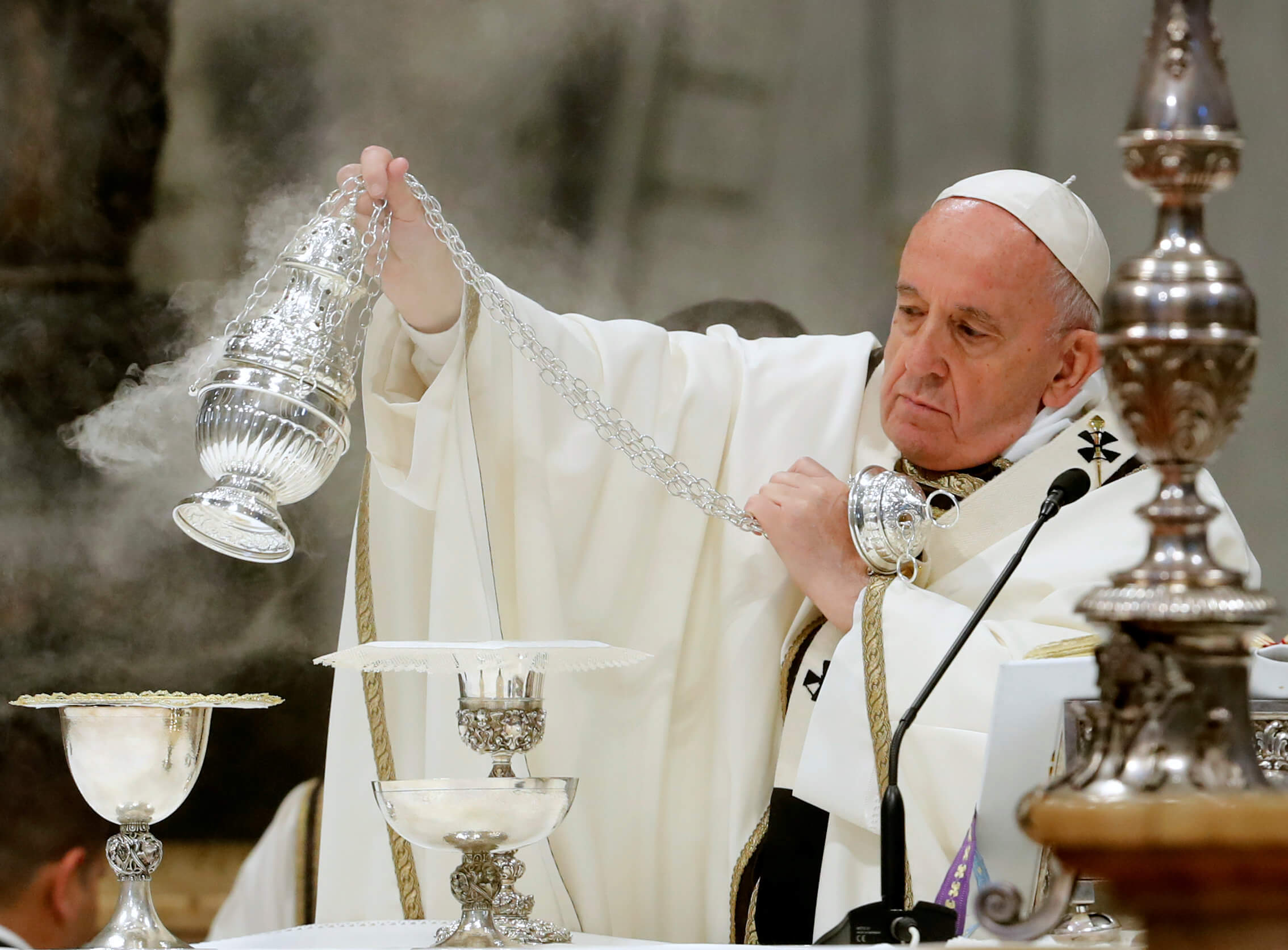 Pope to priests: Best place to be is among the people

Just as Jesus always sought to be with the people to serve, teach and heal them, so, too, must priests always be in the midst of God’s people, “pouring ourselves out” for them, Pope Francis said.

Being with the people “is the most beautiful place” to be, he told priests during the chrism Mass in St. Peter’s Basilica April 18.

Presiding over the first of two Holy Thursday liturgies, Pope Francis blessed the oils that will be used in the sacraments of baptism, confirmation, ordination and the anointing of the sick. Deacons brought the silver urns, one by one, up to the pope, who breathed over the open vessels, symbolizing the infusion of the Holy Spirit.

As Holy Thursday commemorates the day Jesus shared His priesthood with the apostles, Pope Francis also led the priests, bishops and cardinals present in a renewal of their priestly vows.

He used his homily to reflect on how Jesus related to people, especially the huge crowds that pressed in on Him and approached Him with their problems, but also were eager to hear His voice and follow Him.

From the day He was born, the pope said, Jesus attracted lowly shepherds, kings and wise men, and to the day He was nailed on the cross, His heart drew and still draws people like Veronica, the good thief and a Roman centurion.

The Lord always stood in the middle of the crowd “like a shepherd among His flock,” the pope said, and those who gathered around Him were in some way transformed by Him.

The way Jesus encouraged people to be present, he said, contrasts sharply with the “small-mindedness of the disciples, whose attitude toward the people verges on cruelty when they suggest to the Lord that He send them away so that they can get something to eat.”

“Here, I believe, was the beginning of clericalism: in this desire to be assured of a meal and personal comfort without any concern for the people,” Pope Francis said. But Jesus “cut short that temptation” and told the disciples to feed and take care of the people.
Priests must see themselves as the poor with their generous hearts, as the blind, who pray, “Lord, that I may see,” and as the oppressed who have been beaten by personal sin but await God’s compassion to then “be able to show compassion to others.”

Referring to their faculty of administering the sacraments and anointing individuals, the pope told priests, “we are not distributors of bottled oil. We anoint by distributing ourselves, distributing our vocation and our heart.”

A priest who learns how to anoint and bless the way Jesus intended “is thus healed of meanness, abuse and cruelty,” he said.

Pope Francis asked that by being with Jesus “in the midst of our people, may the Father renew deep within us the Spirit of holiness; may He grant that we be one in imploring His mercy for the people entrusted to our care and for all the world.”

Later in the day, the pope was scheduled to celebrate the Holy Thursday Mass of the Lord’s Supper at the Velletri Correctional Facility, about 36 miles south of Rome. He was to wash the feet of 12 prisoners, the Vatican said.