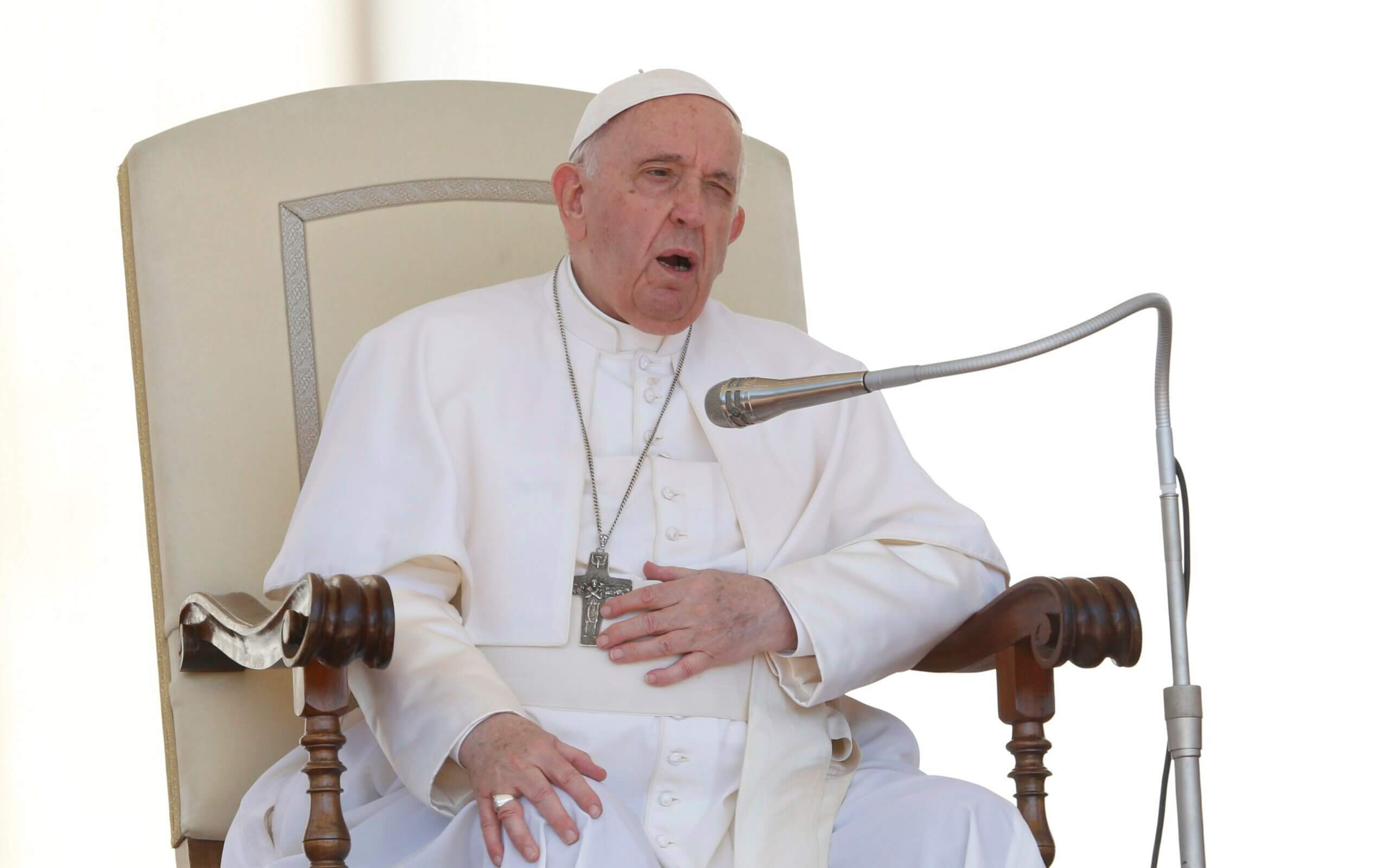 Photo Credit: CNS/Paul Haring - Pope Francis touches his knee during his general audience in St. Peter's Square at the Vatican in this June 1 photo. On his doctors' advice because of ongoing problems with his knee, the pope will not travel to Congo and South Sudan in early July, the Vatican announced June 10.

Because of continuing problems with his knee, Pope Francis has postponed his planned trip to Congo and South Sudan July 2-7, said the Vatican press office.

Matteo Bruni, director of the press office, did not mention whether the pope’s planned trip to Canada in late July was still set.

“At the request of his doctors, and in order not to jeopardize the results of the therapy that he is undergoing for his knee, the Holy Father has been forced to postpone, with regret, his apostolic journey to the Democratic Republic of Congo and to South Sudan,” Bruni said June 10. The trip would be moved “to a later date to be determined.”

Although Pope Francis has canceled several events since mid-January and has begun using a wheelchair or a cane, the Vatican had continued to insist that he would make the two trips in July. The Vatican press office published a detailed schedule for the Africa trip May 28 and released a list of the journalists accredited to the papal flight to Africa June 8.

The South Sudan portion of the trip had been in the works for years.

Pope Francis was scheduled to fly to South Sudan with Anglican Archbishop Justin Welby of Canterbury and the Rev. Iain Greenshields, moderator of the Presbyterian Church of Scotland, for an ecumenical pilgrimage of peace July 5-7. Catholic, Anglican and Presbyterian leaders in South Sudan and internationally have been supporting the nation’s peace process and pushing the leaders of opposing factions to end fighting and collaborate for the good of the nation.

The three leaders had been trying to schedule the visit since 2016 when South Sudanese Catholic, Anglican and Presbyterian leaders visited the pope and archbishop and asked them to go to encourage the peace process. At least 60% of South Sudan’s population, including its political leaders, are Christian.

Pope Francis also was set to visit Kinshasa and Goma, Congo, July 2-5 and to meet with victims and survivors of the ongoing violence in the eastern part of the nation.

It is very unusual for the Vatican to announce a papal trip and publish a detailed schedule for it, then cancel the trip. In 1994, St. John Paul II was forced to cancel two planned trips: one to Beirut and one to Sarajevo. Both visits were postponed because of security concerns. But that year, he had fallen in the shower and broke his femur, which also forced the cancellation of a May visit to Belgium.

The Vatican has not provided details about Pope Francis’ knee ailment or his therapy.

In an interview May 3 with an Italian newspaper, he said, “I have a torn ligament; I will have a procedure with injections, and we will see.”

For the past several months, Pope Francis has attended and given the homily at several Masses where he had been scheduled to be the main celebrant. For example, Cardinal Giovanni Battista Re, dean of the College of Cardinals, presided over the Easter vigil in St. Peter’s Basilica April 16, although Pope Francis himself was the chief celebrant the next day for the Easter Mass in St. Peter’s Square.

After Pope Francis held a closed-door meeting with members of the Italian bishops’ conference May 23, several Italian news outlets reported that bishops had said the pope told them he did not want to have surgery on his knee because when he had colon surgery in July 2021, he had a bad reaction to the anesthesia.

The pope had been admitted to Rome’s Gemelli hospital in the early afternoon July 4 to undergo “a scheduled surgical intervention for a symptomatic diverticular stenosis of the colon.” The Vatican said he was expected to stay in the hospital a week.

He underwent a three-hour surgery that included a left hemicolectomy, which is the removal of the descending part of the colon, a surgery that can be recommended to treat diverticulitis, when bulging pouches in the lining of the intestine or colon become inflamed or infected.

The pope ended up staying in the hospital 10 days.