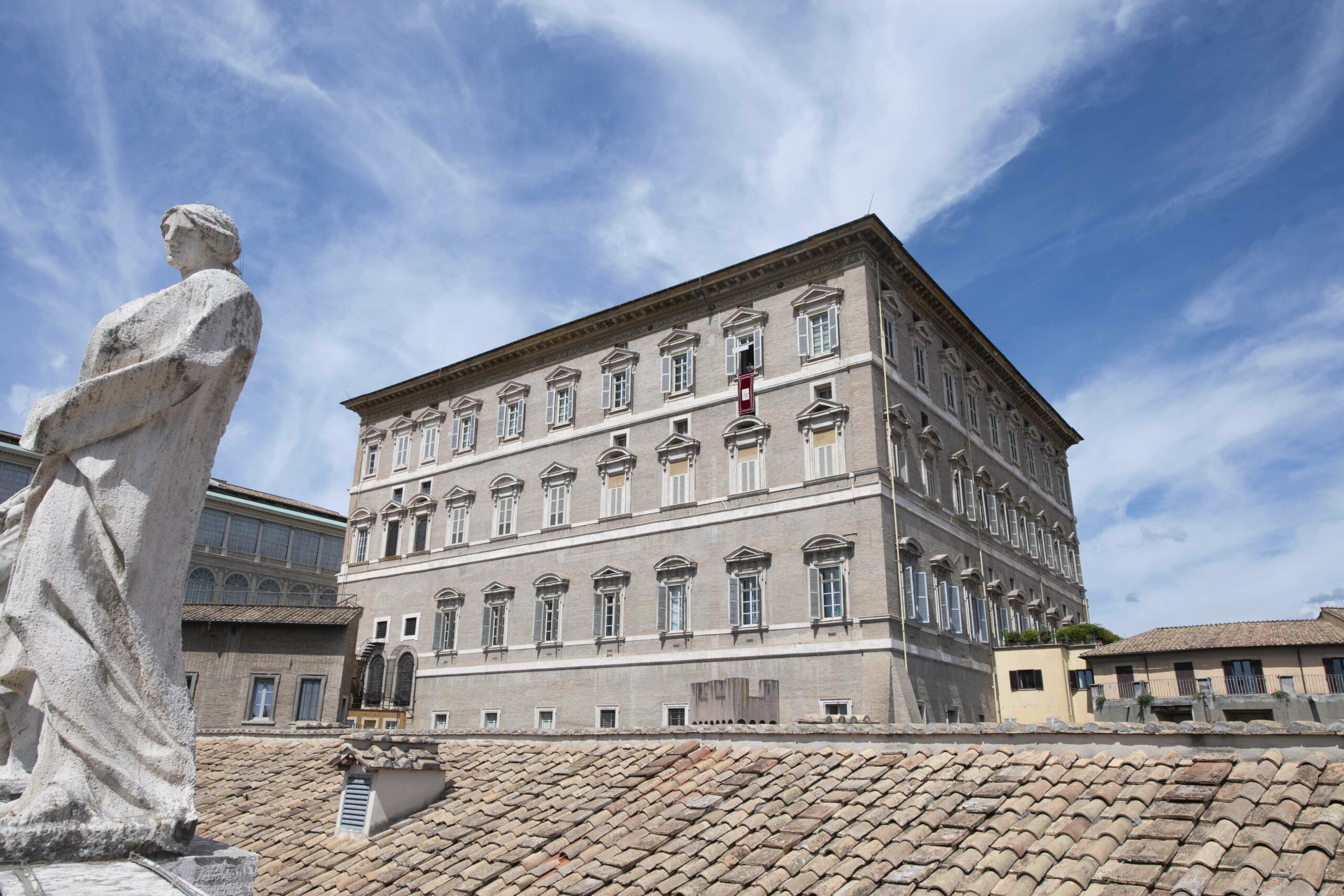 Photo Credit: CNS/Vatican Media - Pope Francis leads the Angelus from the window of his studio overlooking St. Peter's Square at the Vatican Aug. 22.

Service is a calling for all, not a select few, pope says

Following Christ’s example of love and service to those in need is not a task reserved to a select few but a calling for all Christians, Pope Francis said.

Jesus’ image of entering the kingdom of heaven through a “narrow gate” does not mean that “only a few are destined to go through it” but instead means living “one’s life in love, in service, and in giving oneself as he did,” the pope said Aug. 21 during his Sunday Angelus address.

“To enter the plan God proposes for our life requires that we restrict the space of selfishness, reduce the presumption of self-sufficiency, lower the heights of pride and arrogance, and that we overcome laziness, in order to traverse the risk of love, even when it involves the cross,” he said.

After praying the Angelus prayer, Pope Francis said he was following news of the continued repression against the Catholic Church in Nicaragua “with concern and sorrow.”

On Aug. 19, Nicaraguan police burst into Matagalpa diocesan headquarters and removed Bishop Rolando Álvarez and nearly a dozen others who had been under house arrest for more than two weeks.

Although the pope did not specifically mention Bishop Álvarez’s arrest, he prayed for peace in the country through Mary’s intercession.

“I would like to express my conviction and my hope that, through an open and sincere dialogue, the basis for a respectful and peaceful co-existence might still be found. Let us ask the Lord, through the intercession of the ‘Purísima’ (‘Mary Most Pure’), to inspire everyone’s heart with this concrete will,” he said.

As he has nearly every week, he also prayed for the people of Ukraine.

Addressing an estimated 12,000 pilgrims gathered in St. Peter’s Square, the pope reflected on St. Luke’s Gospel, in which Jesus responds to a question about those who will be saved by calling on his followers to “strive to enter through the narrow gate.”

The image of a narrow gate, the pope said, “could scare us, as if salvation is destined for only a few elect, or perfect people.”

However, he added, the belief that only a chosen few people would “contradict” Jesus’ teaching that all are welcome “at the table in the kingdom of God.”

Nevertheless, Jesus’ use of the image of the narrow gate was his way of telling Christians that “to enter into God’s life, into salvation, we need to pass through Him, not through another one, through Him; to welcome Him and His word.”

He also called on Christians to reflect on “those daily acts of love that we struggle to carry on with” and to reflect on those who dedicate their lives and sacrifice themselves to help those in need, including parents, as well as those who serve the elderly and the poor.”

Pope Francis encouraged Christians to follow the example of those who choose “the narrow door of Jesus” and not “the wide door of their own convenience.”

“Brothers and sisters, which side do we want to be on?” the pope asked. “Do we prefer the easy way of thinking only about ourselves, or do we choose the narrow door of the Gospel that puts our selfishness into crisis, but which makes us able to welcome the true life that comes from God and makes us happy? Which side are we on?”