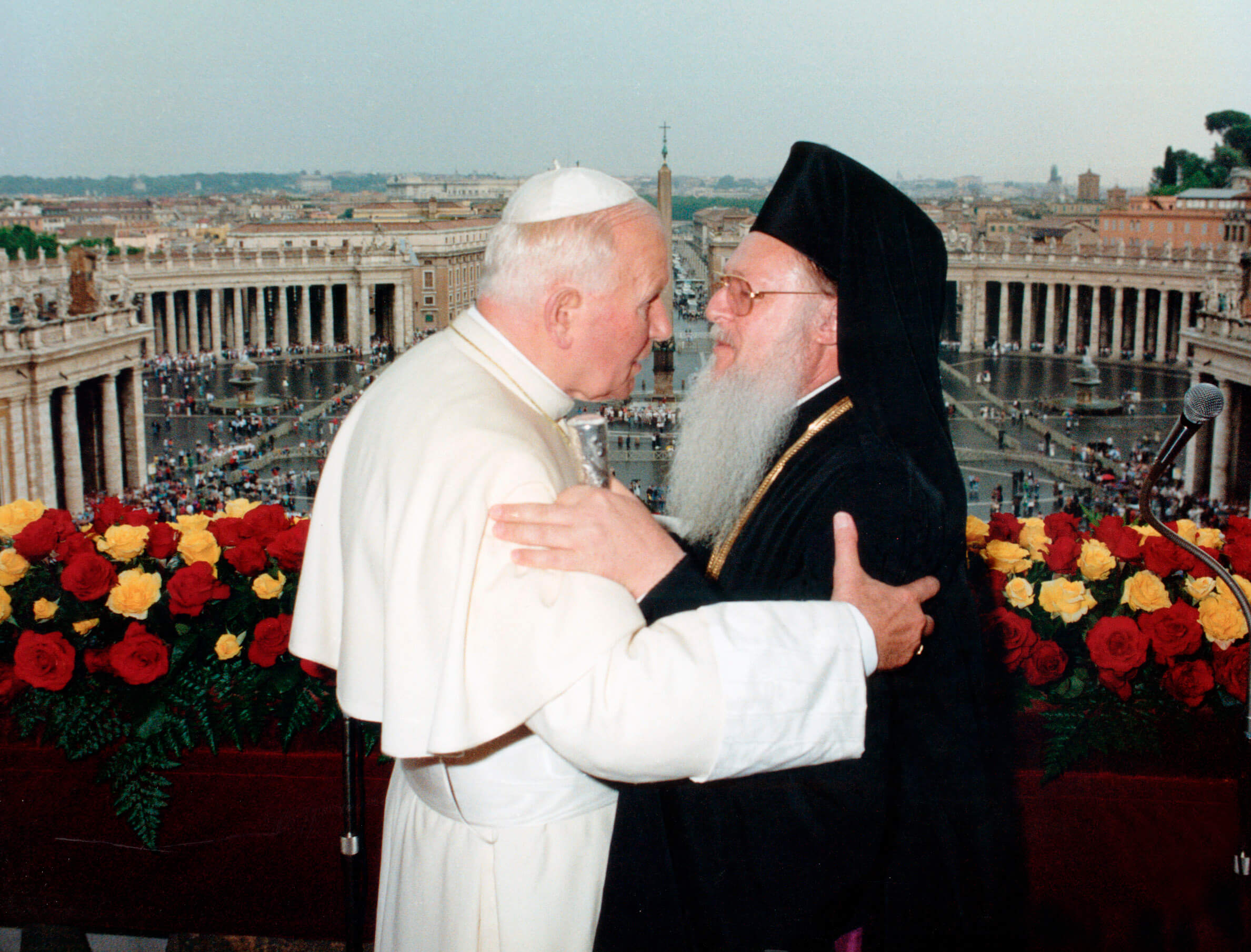 ‘Ut Unum Sint’ at 25: Learning to recognize, welcome others’ gifts

Twenty-five years ago, St. John Paul II’s encyclical on ecumenism, “Ut Unum Sint,” put the papal seal of approval on a shift in the Catholic Church’s approach to the search for Christian unity.

The search for what Christians held in common was a necessary first step in recognizing each other as Christians, called by Jesus to be one.

But in “Ut Unum Sint” (Latin for “that they may be one”), St. John Paul said that dialogue is more than “comparing things,” said Bishop Brian Farrell, secretary of the Pontifical Council for Promoting Christian Unity.

Dialogue, St. John Paul said, is “an exchange of gifts.”

Recognizing that other Christians have gifts and being willing to accept them as something that could help one’s own community grow in faith takes both individual and collective conversion, the bishop said.

For Catholics, one of the gifts it wants to offer is the ministry of the bishop of Rome — the papacy.

St. John Paul made headlines around the world when, in “Ut Unum Sint,” he invited “church leaders and their theologians to engage with me in a patient and fraternal dialogue” on how the bishop of Rome could exercise his ministry of unity among all Christians.

The papacy and the power involved in exercising papal ministry have been at the center of division and debate for millennia. It was the key issue in many of the fractures within the Christian community and is still debated within the Catholic Church itself.

While Anglican, Lutheran, Presbyterian and other Protestant churches published responses to St. John Paul’s invitation, the most sustained focus on the papacy has come in the official Orthodox-Roman Catholic dialogue.

Since 2006, the Joint International Commission for Theological Dialogue Between the Catholic Church and the Orthodox Church has been focusing on the history and exercise of the papacy. And the dialogue is ongoing.

But one point St. John Paul made in “Ut Unum Sint” is that the search for Christian unity, which needs theological reflection, cannot stop there. It is not simply an intellectual exercise.

“The theoretical discussions have to solve the question of the balance between jurisdiction and communion,” Bishop Farrell said. “But at the practical level, we are living a communion that is normal and positive and visible” every time the pope and other Christian leaders come together to pray, to call for prayers and to advocate for action to benefit the common good, the end of violence and the care of creation.

The pope always has been the pope because he is the bishop of Rome, not vice versa.

But Pope Francis’ constant referrals to himself as the bishop of Rome also have had a positive ecumenical impact.

“I’m sorry that some Catholics think that this is some sort of diminution, some lessening of the dignity or the power of the papacy or something,” Bishop Farrell said. “It really is not.”

Pope Francis is “theologically correct” to refer to himself that way, the bishop said, “and from the ecumenical point of view, it helps to put the papacy in its proper perspective.”

“I would dare to say some Catholics have this idea that the pope is somehow outside the church, above it, separate, isolated, whereas Pope Francis keeps reminding us that the pope is a bishop within the church but with particular responsibilities,” Bishop Farrell said.

The vision of the papacy and the Catholic Church’s ecumenical commitment itself are rooted in the Second Vatican Council’s understanding of what the church is, he said.

“It changed the perspective of the church from being a structured institution held together by its laws more than anything else,” he said, “to being the church, which is a communion of all those who profess the faith and live the Christian life.”

Pope Francis’ vision of “synodality” flows from that notion of the church as a communion. The term means “walking together” with every member of the church, recognizing that the grace of baptism makes one part of the body of the church and, therefore, responsible for its life and mission.

“Ut Unum Sint” did not refer to the ecumenical importance of synods, but “synodality” has been one of the traits of the Orthodox churches in particular that Pope Francis sees as a gift for the Catholic Church.

And, Bishop Farrell said, Pope Francis is not looking only at the functioning of the Synod of Bishops, but in living synodality so many aspects of the life of the church around the world would be studied, prayed about and decided “in the particular historical, cultural and political situation of the different countries.”

Many of the Catholic Church’s ecumenical partners see Pope Francis’ focus on synodality as a sign of hope that when Christians get to the point of declaring full communion with each other, real “unity with diversity” will be possible.

At the beginning of the ecumenical movement, many churches saw the Catholic Church “as a huge, well-organized, centralized, dominant organization,” Bishop Farrell said. “And most of the other churches felt afraid that the Catholic Church wanted to impose on them our way of doing things, and that that was the kind of ecumenism we were going to follow.”

“We had to learn to show them that is not the case; we don’t want to make them be like us,” he said. “We want to respect them in all that they are, and we are not looking for some sort of domination of them.”

“Ut Unum Sint” is and continues to be important because it clearly stated that “the end game” of the Catholic Church’s ecumenical commitment “is not some sort of Catholic uniformity,” Bishop Farrell said. When two ways of thinking or expressing the faith are complementary, “there’s room for them. If they become contradictory, then they have to be overcome.”

“The end game,” he said, “is the fidelity of all of us to Christ and the Gospel, and respect for the ways in which that fidelity has been lived out down the centuries in all the different cultural circumstances.”