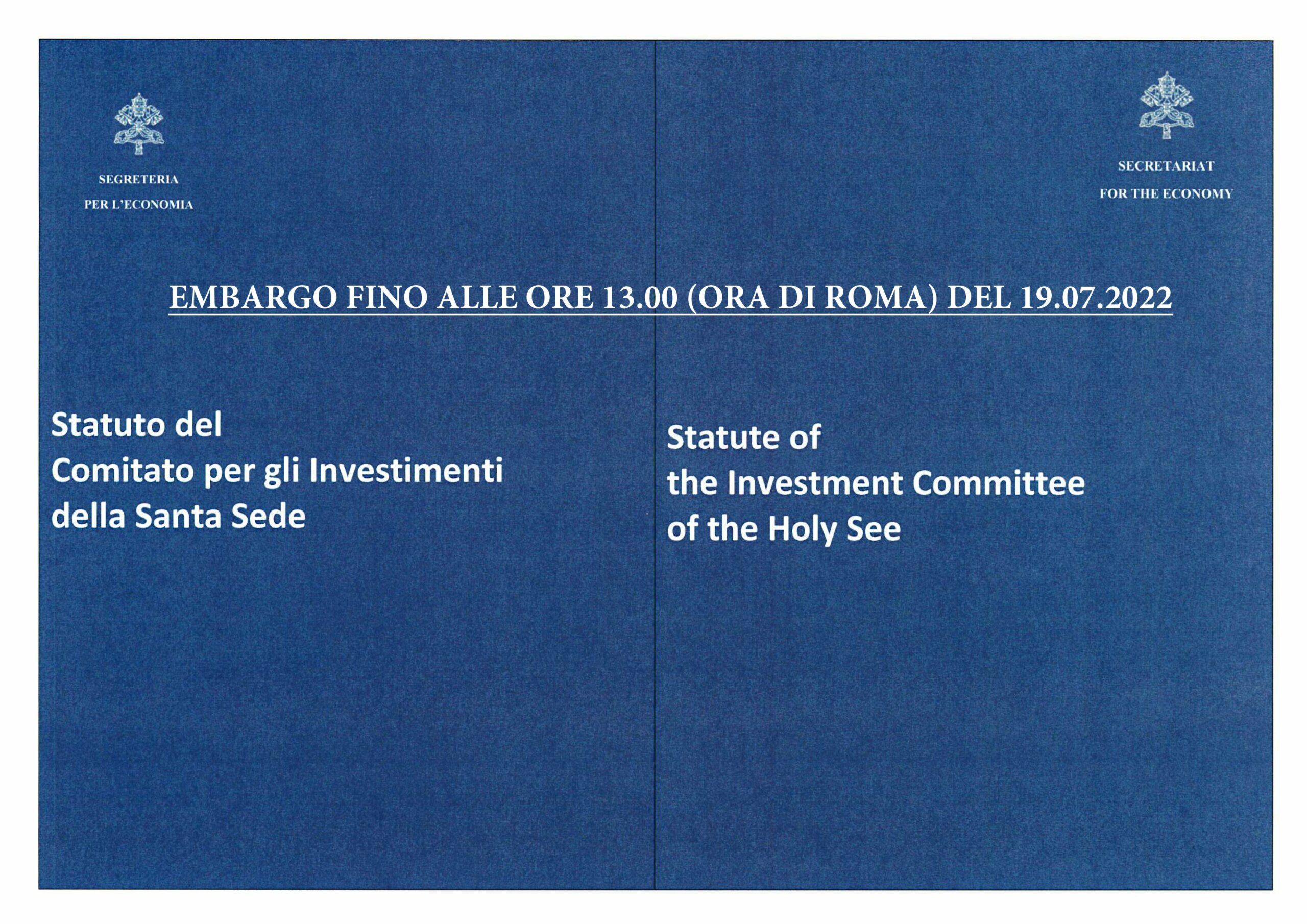 Photo Credit: CNS/courtesy Holy See Press Office - This is the cover of a document released by the Investment Committee of the Holy See July 19 with new statutes and policies governing Vatican investments. The document calls for

The Vatican released a new policy consolidating the investment portfolios of all offices and keeping all current and future investments in line with the social doctrine of the Catholic Church.

The new rules will ensure that investments will contribute “to a more just and sustainable world” and protect “the real value of the Holy See’s net worth and generate a sufficient return to sustainably contribute to the financing of its activities,” said a statement published July 19 by the Vatican Secretariat for the Economy.

The policy mandates “specific exclusions of financial investments that contradict” the Catholic Church’s basic principles, including the sanctity of human life, human dignity and the common good, the statement said.

The new policy will go into effect on an experimental basis for five years, beginning Sept. 1.

Curia offices must entrust their financial investments to the Administration of the Patrimony of the Holy See, which administers Vatican properties and investments, said the new policy, which was approved by Pope Francis and signed by Jesuit Father Juan Antonio Guerrero Alves, prefect of the Secretariat for the Economy.

The administration, known by its Italian initials APSA, will in turn establish a single fund for the Holy See “into which investments in the various financial instruments will flow and will have an account for each institution, as well as processing reporting and paying returns.”

Furthermore, the newly established Investment Committee — chaired by U.S. Cardinal Kevin Farrell, prefect of the Dicastery for Laity, the Family and Life — will implement the new investment strategy and “evaluate the appropriateness of the choices, with particular attention to the conformity of the investments made with the principles of the social doctrine of the church, as well as the parameters of return and risk according to the investment policy,” the secretariat said.

According to the constitution, “Praedicate Evangelium” (“Preach the Gospel”) reforming the Roman Curia, the Investment Committee is responsible for “ensuring the ethical nature of the Holy See’s movable investments according to the social doctrine of the church and, at the same time, their profitability, adequacy and risk.”

The investment policy stated that the Holy See, including the Roman Curia and related entities, have a responsibility to support the church’s mission “by investing in line with the principles of Catholic teaching and upholding the common good, while recognizing their fiduciary responsibilities as investors.”

It also included a list of sectors that Vatican offices are prohibited from investing in, including: “pornography and prostitution; gambling; weapons and defense industry; pro-abortion health centers; and laboratories and pharmaceutical companies that manufacture contraceptive products and/or work with embryonic stem cells.”

However, the policy only discouraged “speculative investments” in controversial sectors, such as commodities, the oil and mining industry, nuclear energy or producers of alcoholic drinks.

On the other hand, the policy encourages investment in companies working to protect the environment and promote the use of clean energy and those committed to “eradicating inequality in all its manifestations, namely (the) gender pay gap, maximum-minimum wage gap, financial exclusion, hunger, poverty” or that promote development projects in poor countries.