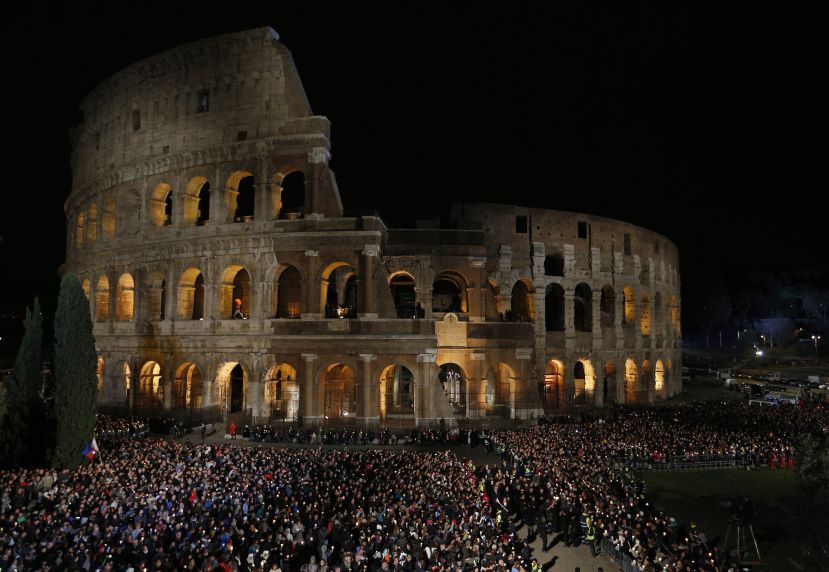 Way of the Cross Highlights Victory of Love

Vermont Catholic
Vatican
0 Comments
A French biblical scholar not only wrote the meditations to guide Pope Francis’ 2017 celebration of the Via Crucis at Rome’s Colosseum, she also designed her own set of Bible-based Stations of the Cross.

Pope Francis asked Anne-Marie Pelletier to share her reflections with the worldwide audience that follows the stations on the night of Good Friday. She is the first wife, mother and grandmother to author meditations for the papal service.

In the past, writers chosen by the popes have used either the traditional 14 stations followed by pilgrims walking the Via Dolorosa in Jerusalem or the 14 biblical stations used by St. John Paul II in 1991. The main difference is that Jesus falling three times and Veronica wiping the face of Jesus are in the traditional devotion, but not in any of the Gospels.

Pelletier’s stations are a variation on St. John Paul’s Scriptural Stations of the Cross. She starts with Jesus being condemned to death, rather than with Jesus in the garden of Gethsemane, and ends with the women preparing to anoint Jesus’ body in the tomb.

Because the Stations of the Cross do not have a “binding form,” Pelletier told Vatican Radio, “I chose those moments that seemed particularly significant.”

“I didn’t think about what I wanted to say or what I wanted to transmit,” she said. “Rather, my idea was to put myself on this path, to try to follow in the footsteps of Jesus as he went up to Golgotha.”

The driving idea, she said, is that “love is stronger” than any evil. “The love that comes from God is victorious over everything. I believe the task of Christians is to give witness to that.”

In the third station, “Jesus and Pilate,” she said she felt it was important to show the “complicity” of Pilate and members of the Jewish Sanhedrin in condemning Jesus to death.

In the meditation, which was to be read at the Colosseum, Pelletier wrote: “For all too long, Christians have laid the blame of your condemnation on the shoulders of your people Israel. For all too long, we have failed to realize the need to accept our own complicity in sin, so as to be saved by the blood of Jesus crucified.”

She titled the fourth station, “Jesus, King of Glory,” and focused on the soldiers dressing Jesus in a purple robe and crowning him with a crown of thorns.

Their actions show “the banality of evil,” she wrote. “How many men, women and even children are victims of violence, abuse, torture and murder in every time and place.”

“Can the sufferings of yet one more innocent person really help us?” Pelletier asked people to consider.

“The scorn and contempt of Jesus’ torturers reveal to us — in an absolutely paradoxical way — the unfathomable truth of his unique kingship, revealed as a love that seeks only the will of his father and his desire that all should be saved.”

While the Gospels do not mention Jesus falling as he carried his cross, Pelletier imagined that he did “on his grueling journey, most likely under the lashings of his military escort.”

“He who raised the sick from their beds, healed the crippled woman, raised the daughter of Jairus from her deathbed, made the lame walk, now lies sprawled in the dust,” she wrote. “Through him, the Most High teaches us that he is at the same time — incredible as it is — the most lowly, ever ready to come down to us, and to descend even lower if necessary, so that no one will be lost in the depths of his or her misery.”

In the prayer she wrote for the sixth station, “Jesus and Simon of Cyrene,” Pelletier asks God’s blessing for every act of kindness every person performs.

“Deign to acknowledge them as the truth of our humanity, which speaks louder than all acts of rejection and hatred,” she prayed. “Deign to bless the men and woman of compassion who give you glory, even if they do not yet know your name.”

The seventh station, “Jesus and Daughters of Jerusalem,” focuses on Jesus’ statement to the women, “Do not weep for me, but weep for yourselves and your children.”

“These tears of women are always present in this world,” Pelletier wrote. “They fall silently down their cheeks.”

But women are not the only ones who weep, she said, noting the “tears of terror-stricken children and of those wounded on battlefields crying out for a mother.”

She prayed that God would teach people not to scorn the tears of the poor, but rather “to have the courage to weep with them.”

The French scholar’s reflection on Jesus being taken down from the cross highlights the “signs of loving care and honor” with which Joseph of Arimathea lowers Jesus’ body and how, in death, Jesus “is once again in hands that treat him with tenderness and compassion.”

The attitude continues in the final station commemorating Jesus being laid in the tomb and the women preparing to anoint his body.

“Lord our God,” she prayed, “graciously look upon and bless all that women everywhere do to revere weak and vulnerable bodies, surrounding them with kindness and respect.”