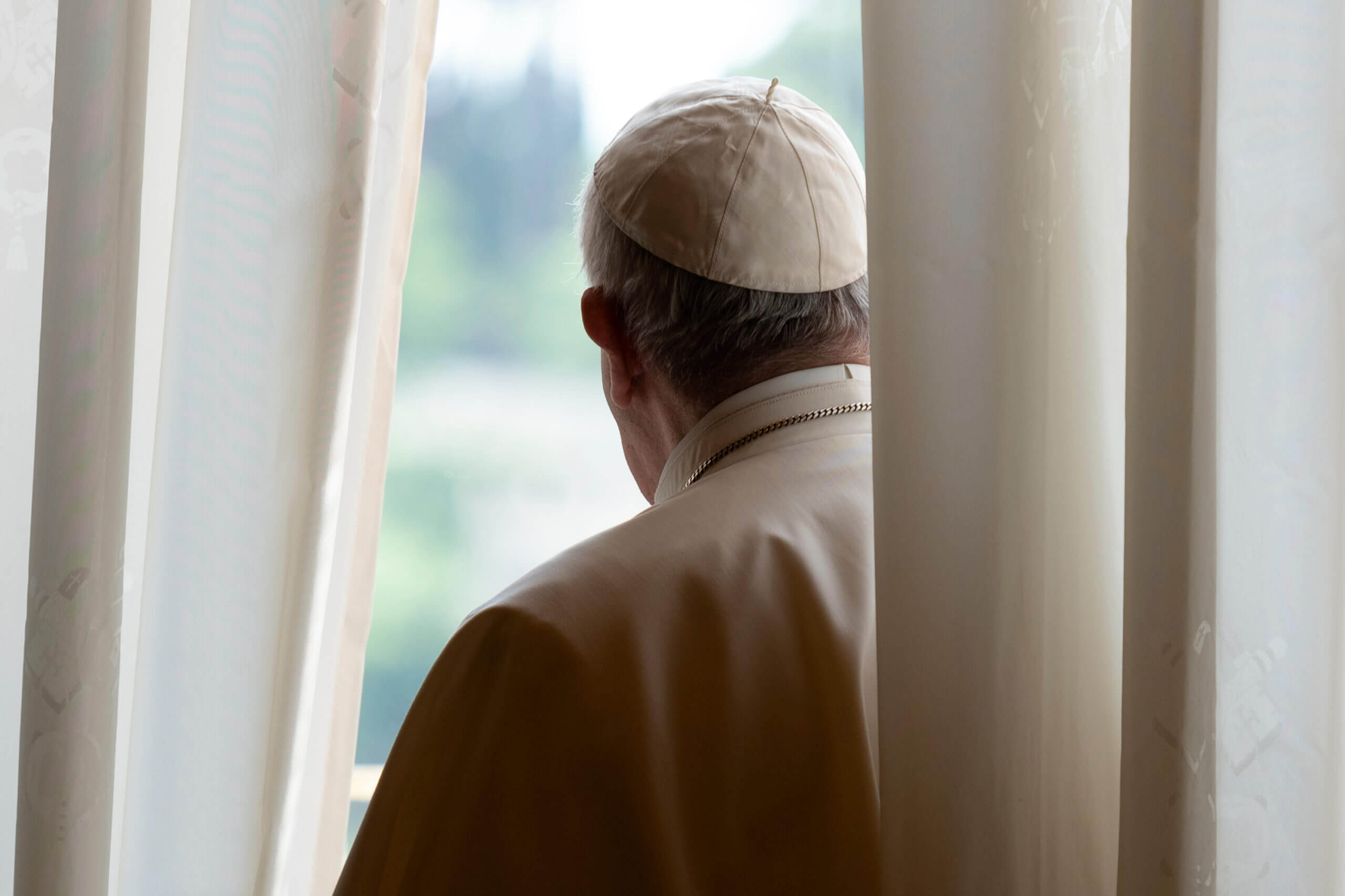 Photo Credit: CNS/Vatican Media - Pope Francis looks out a window from his library in the Apostolic Palace at the Vatican May 20.

The mystery and wonder of God’s creation can open the hearts of men and women to express their gratitude through prayer, Pope Francis said.

During a live broadcast of his weekly general audience from the library of the Apostolic Palace May 20, the pope said that human beings are “the only creature aware of such a profusion of beauty” and cannot help but “wonder what design of love must be behind such a powerful work.”

“The prayer of man and woman is closely linked to the feeling of wonder,” he said. “Human greatness is miniscule when compared to the dimensions of the universe. The greatest human achievements seem to be few and far between” when compared to God’s creations.

The pope’s reflection coincided with the observance of “Laudato Si’ Week” May 16-24. The weeklong event was promoted as an occasion for Catholics to look at steps they have taken to protect the environment and assist the world’s poor people.

Before concluding his talk, the pope said that in contemplating God’s creation, Christians can be inspired to give thanks to God through prayer.

“We are children of the great King, the Creator, capable of reading his signature in all of creation, that creation which we don’t care for today. But in that creation, there is the signature of God who made it out of love,” he said.

Continuing his series of talks on prayer, the pope said that while one may feel insignificant in the grand scale of the universe, “in prayer, a feeling of mercy is overwhelmingly affirmed” and leads to gratitude to God.

“The relationship with God is the human being’s greatness,” he said. “By nature, we are almost nothing but by vocation, we are the sons and daughters of the great King!”

“It’s an experience many of us have had. If the story of life, with all its bitterness, sometimes risks stifling the gift of prayer in us, it is enough to contemplate a starry sky, a sunset, a flower, to rekindle the spark of thanksgiving,” the pope said.

The pope explained that the biblical account of creation was written when the people of Israel were under occupation, and many were deported or forced into slavery in Mesopotamia.

Nevertheless, “just starting from the great story of creation, someone began to find reasons to give thanks, to praise God for existence,” he said.

“I would say that prayer opens the door to hope,” the pope said. “Because men and women of prayer safeguard basic truths; they are the ones who say — first to themselves and then to others — that this life, despite all its labors and trials, despite its difficult days, is filled with a grace for which to marvel.”

Pope Francis said that prayer illuminates one’s life, “even in the darkest times, even in painful times” and that through it, Christians are called to become “bearers of joy.”

“This life is the gift that God has given us, and it is too short to be consumed in sadness, in bitterness,” the pope said. “Let us praise God, simply content that we exist. Let us look at the universe, look at its beauty and even look at our own cross and say, ‘You exist. You made us this way for you.'”