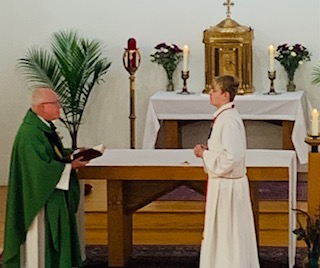 Lucas King “had a feeling” that he should be an extraordinary minister of Holy Communion, that it was the “right thing to do” to “help the church.”

But at 13, he needed special permission from the bishop.

Both John McMahon, the parish catechetical leader at Holy Family Church in Essex Junction, and Edmundite Father Charles Ranges, pastor of the Essex Catholic Community that includes Holy Family, contacted Josh Perry, director of the Office of Worship for the Diocese of Burlington, about the possibility of having Lucas appointed an extraordinary minister of Holy Communion. “They both spoke very highly of Lucas’s active faith and of his devotion to the Eucharist, and neither of them hesitated to recommend him for the ministry,” he said. “This testimony to his active faith and the recommendation to ministry was the first thing Bishop [Christopher] Coyne looked for when considering the request. The fact also that Lucas sought out John and Father Ranges on his own to inquire about the possibility of becoming a minister and followed up with them while the request was being considered also was factored into the decision.”

“I was surprised that they would let someone as young as me do such a big job in the parish,” said Lucas, a seventh grader at Albert D. Lawton Middle School in Essex Junction.

“Lucas is an extraordinary young man, very pious, and performed the ministry with the upmost reverence,” Father Ranges said.

To prepare himself spiritually to distribute communion, Lucas said he prays “and I just mentally prepare myself like I do normally altar serving.”

Lucas, who enjoys playing guitar and basketball, said it “feels like I am closer to God when I am giving communion, and it feels like He is right there with me.”

He expressed his appreciation to Bishop Coyne for giving him special approval to become an extraordinary minister of Holy Communion to Father Ranges and McMahon for supporting him in his faith.